Recently, numerous operators looking to charter jackups over the next three years have found themselves with greatly reduced available options and offered much higher day rates than expected: what has caused this sudden tightening of the jackup market?

For the past five years until recent months, the distressed and oversupplied jackup market had little prospect of seeing marketed utilisation above 90%. Stranded jackups in shipyards and ports across the world had slim chances of picking up work. But this started to change in mid-2021 when Saudi Aramco announced plans to increase its jackup fleet by 20 incremental units through multi-rig tenders. Then, in the first half of this year it announced plans to increase by up to 20 more rigs.

At present, the operator has plans to almost double its fleet, which in the past 10 years has averaged 45 jackups, to 92 contracted jackups by the end of 2023. The increase can be seen in Graph 1 below. Currently, the operator has 50 rigs under contract and at the time of writing will have 78 contracted by mid-2023. It is in the midst of contracting about 14 more.

In addition, the UAE has production targets to meet, so Abu Dhabi's ADNOC Drilling, is progressing its fleet expansion. It has purchased 13 units in the past two years and is in the process of purchasing additional units.

These two national oil companies alone are absorbing about 55 jackups (including those recently contracted but which have not started work yet) as incremental demand from the marketed fleet - that is 12% of the global jackup fleet, and 22% of the fleet capable of drilling between 350 ft and 400 ft of water.

The contracting spree has resulted in at least 25 jackups scheduled to move into the Middle East from other regions. These are at least seven jackups from the Americas, 14 from Southeast Asia and at least four from China.

Another interesting development is the rise of Middle East drilling contractors. Between ADNOC Drilling and Advanced Energy Systems (ADES) they hold 70% of jackup purchases in 2022. ADNOC Drilling its mostly owned by Abu Dhabi National Oil Company (ADNOC) and ADES is owned by the Public Investment Fund of the Kingdom of Saudi Arabia. In addition, Saudi Arabian drilling contractor Arabian Drilling recently bought two jackups from Mexico for contracts in Saudi Arabia.

As can be seen below in Graph 2, the above awards plus charters in other parts of the world have allowed marketed jackup utilisation to increase to a seven-year high of 90%. In the Middle East this is 93% and is expected to reach 100% of the marketed fleet by early 2023. 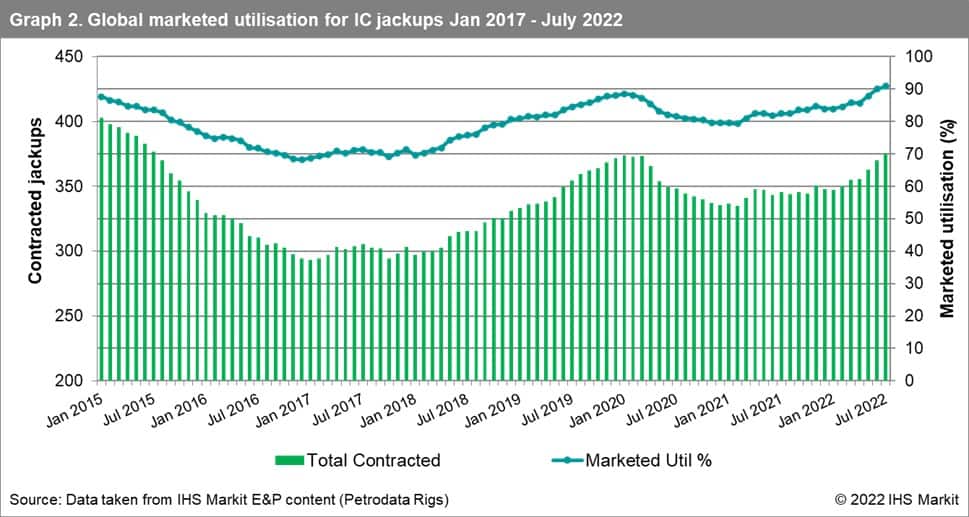 As a result, beyond Saudi Aramco, a few national oil companies with long term jackup demand are starting to feel the effects of this scarcity as rig availability is not confirmed to them and prices are 30% to 50% higher than offers of one year ago. Some operators are in the midst of planning alternative ways to meet their rig demand, such as buying whichever jackups are left from contractors in financial difficulties and even building new ones.

A few companies are known to have already commenced dialogue with shipyards regarding the possibility of ordering newbuilds to meet their long-term demand. Interestingly, the only shipyards left that would be willing to build rigs following the trauma of the last few years are in the Middle East, plus a small number in China. However, construction prices remain high due to inflated steel prices.

Others, like QatarEnergy are making sure they secure the existing fleet in the long term and have started to have discussions with providers on extending rig contracts beyond 2025.

Due to the increase in awards, 17 jackups which had been idle for a long time are now being reactivated - including 10 for Saudi Aramco. And the number of stranded newbuild jackups has also decreased dramatically: only 5% of the total jackup fleet is now under construction as can be seen in Graph 3, with only a handful of favoured designs left. Twenty-six jackups remain under construction/undelivered, and of those, nine (34%) are contracted - mostly to Saudi Aramco. 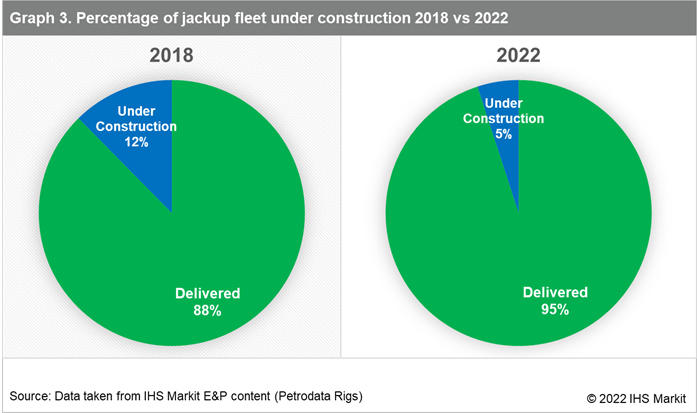 All contracted units are of the popular models: the LeTourneau Class 116-C, Friede & Goldman JU-2000E, and KFELS B Class designs. There are only two remaining uncontracted rigs of the favoured Keppel design. The rest of the newbuilds are unlikely to be taken for the time being.

In the past seven years, jackup prices had come down to an average of USD 55,000-75,000 per day for premium rigs in benign environments but improvement started in 2019, reaching above USD 80,000. However, that quickly fell back down to average levels during the pandemic downturn.

Now, as utilisation is improving, day rates have moved up, across different jackup market categories, but mainly for the premium category (JU 361-400 IC), as seen in Graph 4, where most fixtures have taken place. Average day rates for the premium category have surpassed USD 90,000 and most currently negotiated dates are above USD 100,000 with the new Saudi Aramco tender expected to result in day rates from USD 110,000 to 130,000 with higher mobilisation rates than before that could reach USD 45 million. Those rates haven't been seen since 2015.

Based on production targets and current visible demand, the Middle East will see the greatest increase in jackup demand by far. The graph below shows the forecast demand and supply deficit for Middle East jackups per month. To meet the incremental demand the region will see at least 30 units mobilised into the region from elsewhere (including already scheduled rigs). 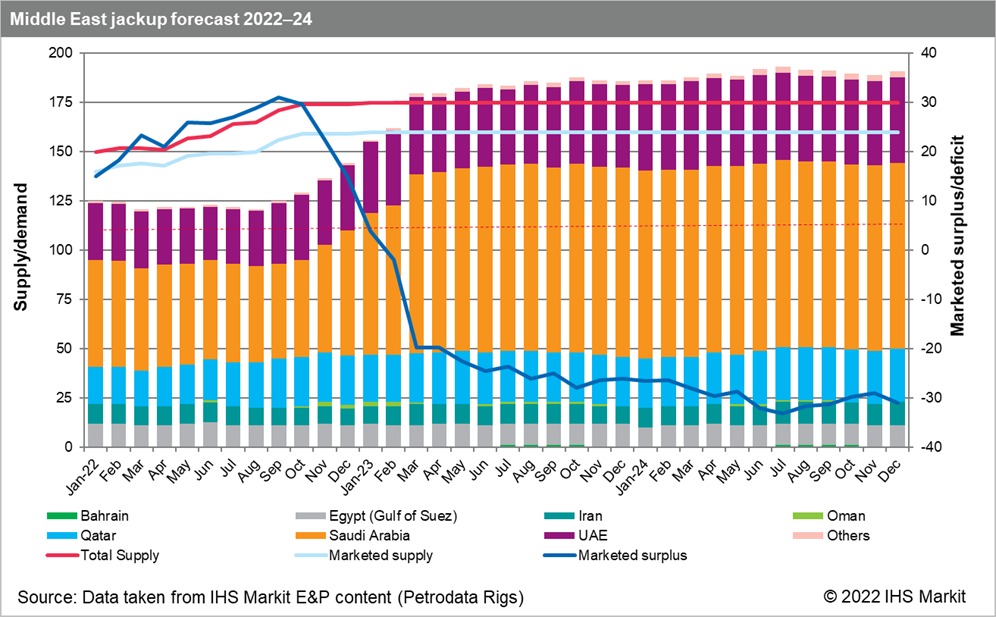 In the next 18 months, global marketed utilisation is expected to remain above 90% and approach 95% by the end of 2023. We expect this will allow day rates to continue in a gradual upward trend that could average USD 150,000 by the end of 2023. 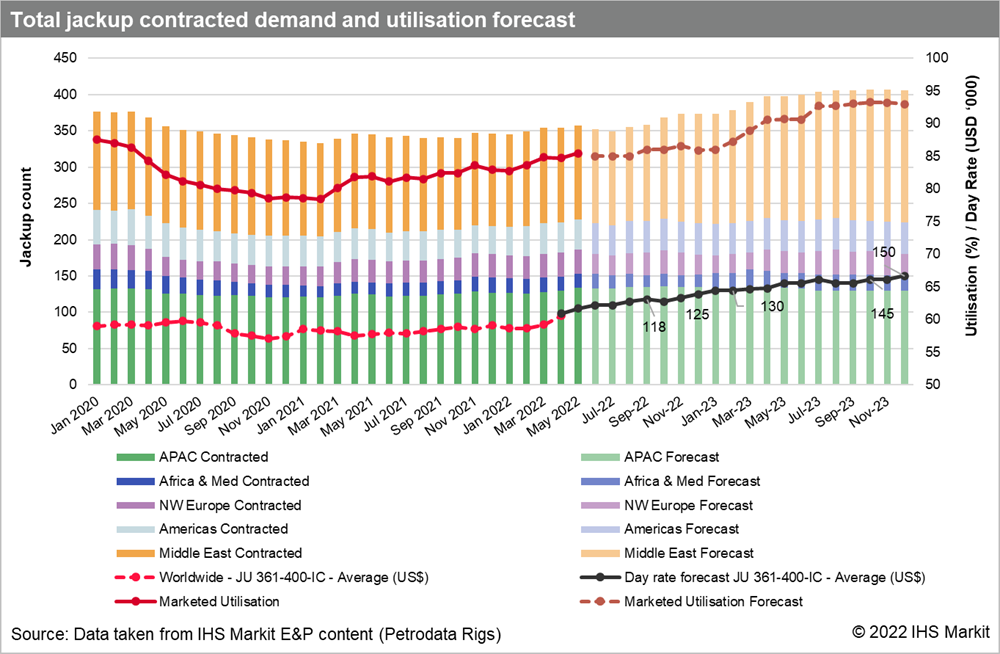 This once distressed sector is coming back to life and moving towards a tight market in the next three to five years if the current demand remains. Rates will continue to increase, and perhaps opportunities will materialise to build more rigs possibly. This is becoming clearer with about 26% of contracted jackups being 30 years old and above, and many of them reaching the end of their lifecycle. Once this happens, there are not many rigs that can replace standard and shallow-draft units. Interesting times lie ahead.