The golden-age of trackers: One third of global ground-mounted PV installations will use trackers from 2019 to 2023

2018 was a record year for global shipments of single-axis solar photovoltaic (PV) trackers as they increased by over 40 percent, surpassing 20 gigawatts-dc (GW) globally for the first time. While the United States continued to be the largest individual market for single-axis trackers last year, shipments also increased in Mexico, Australia, Egypt, Spain, and other large utility-scale markets.

The Americas was the largest regional market, accounting for more than half of global PV tracker demand. However, the growth rate was strongest in the Middle East and North Africa. PV trackers accounted for over 25 percent of global ground-mount shipments for the first time in 2018.

The top-ten suppliers continued to benefit from greater adoption of PV tracker technology, and all of them achieved higher year-over-year shipment volumes in 2018. NEXTracker continued to lead the market, for the fourth year in a row, accounting for 29 percent of global PV tracker shipments. As was the case last year, Array Technologies was the second largest supplier in the market, followed by PV Hardware, Arctech Solar, and Soltec. 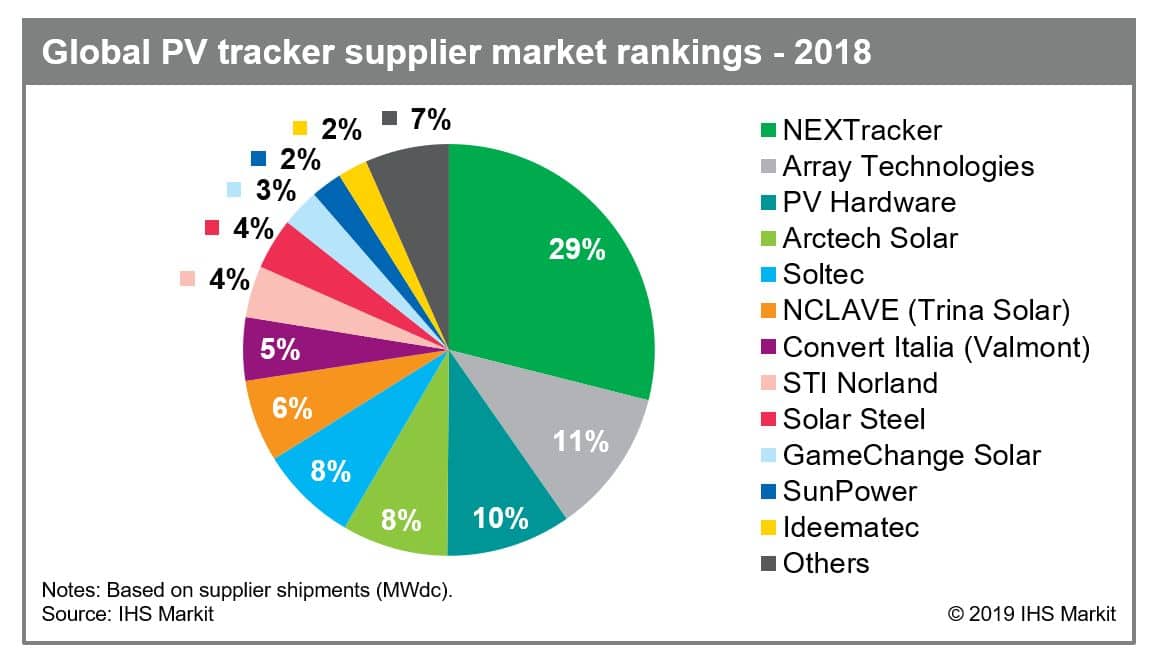 Following a record year of shipments for PV tracking systems globally in 2018, IHS Markit forecasts more than 150 GWdc of PV tracking systems will be deployed from 2019 to 2023, accounting for approximately one third of ground-mounted PV installations during the period according to its recent Global PV Tracker Market Report - 2019 (subscription required to access the report). The Americas will remain the largest region for PV tracker demand, accounting for more than 40% of the global tracker market over the next five years. Key markets in this region will include the United States, projected to be the largest individual market for PV trackers globally during forecast period, along with Mexico due to a near-term surge in utility-scale PV deployments after recent capacity auction awards.

While the Americas may be the largest regional market for trackers, growth in demand will be strongest across Europe, the Middle East, and Africa (EMEA), led by surging demand for utility-scale PV in markets such as Spain, the United Arab Emirates, Saudi Arabi, and Egypt. The EMEA region has historically been dominated by Spanish suppliers such as PV Hardware and Soltec, which collectively accounted for over 50% of PV tracker shipments to the region in 2018. Competition in the region is expected to increase significantly in the coming years due to the persistence of other European suppliers such as Convert Italia, Ideematec, and NCLAVE (acquired by Trina Solar) in addition to the entrance of US players such as NEXTracker and Array Technologies.

Though Asia will be the largest regional market for PV installations during the forecast period, demand for PV trackers will be weaker than other regions relative to the size and scale of the market, primarily due to stronger price competition with fixed-tilt systems and high competition for suitable land. Even so, Australia, China, and India are projected to be among the top ten largest markets for PV trackers from 2019 to 2023, collectively representing a market opportunity of more than 30 GW during the period. Global PV tracker market leader NEXTracker and leading Chinese supplier Arctech Solar have historically led the pack in Asia, collectively accounting for approximately 60% of PV tracker shipments to the region in 2018.

Global leaders NEXTracker and Array Technologies are poised to continue capturing market share in emerging markets outside of their home markets in the Americas, though competition from other international players such as Soltec, Arctech Solar, PV Hardware, and Convert Italia will serve as challengers to further expansion. 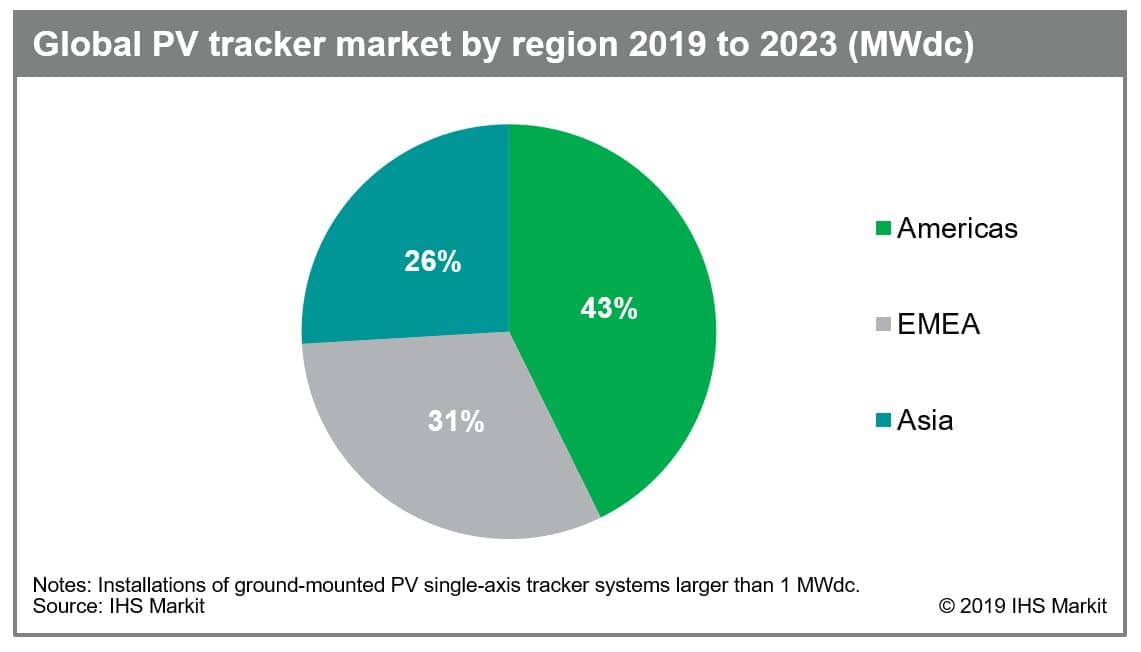 Over the next five years, IHS Markit sees the primary drivers of tracker adoption including: (1) incremental cost reductions driven by continued product innovation, (2) growing demand for utility-scale PV in emerging markets, (3) and the increased adoption of bifacial modules that will lead to higher efficiencies and lower costs for trackers and installation.

Greater efficiency gains and higher wattage for PV modules have been a primary driver of $/Wdc cost reductions for PV mounting and tracking products in recent years. However, surging demand for bifacial modules will help further incentivize the usage of solar trackers globally. Compared to standard mono facial modules, bifacial modules are generally expected to generate 5-20% more energy under optimal albedo conditions, with even greater gains reported for some case studies utilizing PV trackers. The cost delta between bifacial and mono facial modules has narrowed rapidly in recent years and by 2020/2021 IHS Markit forecasts the price gap will become relatively insignificant compared to the efficiency gains. IHS Markit will be publishing a detailed report on bifacial technology in November that will include detailed forecast, drivers and challenges, as well as price and cost trends of bifacial technology in the next years.

Diverse field studies have clearly demonstrated the potential performance gains and lower LCOE (Levelized Cost of Electricity) of installations using single-axis trackers together with bifacial and this is a value proposition being used now for both module producers as well as tracker manufacturers. Manufacturers claim that when installed together with a tracker, the rear side of a bifacial module could generate up to 30% additional output. There are still some uncertainties regarding the exact level of extra-gain associated to the combination of bifacial modules with trackers depending on project type, location and how to model such additional output. The industry is, in fact, still waiting for the highly anticipated publication of IEC standards for bifaciality factor that could be published before the end of 2019 and set some baseline that facilitates modeling and financing of utility-scale projects using this technology.

According to IHS Markit, the best markets for bifacial PV systems will be those with vast areas of highly reflective terrain, such as arid dessert regions and strong demand for ground-mounted utility-scale PV. While China may be the largest market initially, the United States is rapidly becoming a key market for bifacial products, in addition to growing demand across Latin America, the Middle East, and North Africa.

Camron Barati is a Senior Analyst at IHS Markit.