<span/>The drilling market has always been the first and most impacted when there is a crisis in the oil and gas segment, especially by the decrease in exploration. Drilling is a key indicator of the level of short- and medium-term activities expected for the entire sector. Globally, the current scenario is not too optimistic, as suppliers have already registered losses in the first quarter of the year, with the sector hit hard by the COVID-19 economic and health crisis.

<span/>Nonetheless, there are some differences between the current downturn and the one in 2014-15, especially in Brazil. In the previous downturn, the Brazilian upstream market was concentrated around Petrobras to develop the presalt, with high local content rules and few bid rounds. In addition to the oil crash, the operator faced a perfect storm owing to a lack of cash flow and a paralyzing corruption scandal. In the middle of the scandal investigation, Brazilian suppliers had to not only restructure their debt but also handle reduced demand and Petrobras's blockage of new contracts. Schahin, for example, went bankrupt.

At that time, drilling campaigns were reduced to minimum levels and Petrobras maintained focus on anticipating development wells, especially in the Lula and Búzios presalt fields in the Santos Basin, where most of the production units were under construction. Moreover, operators guaranteed large discounts and cost reductions on new contracts, with low day rates and shorter durations.

The Brazilian upstream market has changed since then—international oil companies have a large quantity of acreage to be explored and developed in promising presalt areas acquired in the past three years. It was only after 2018 that the drilling market started to recover, with different operators drilling new-field wildcats, new rig tenders, and new campaigns. Additionally, operators guaranteed large discounts and cost reductions on new rig contracts, with low day rates and shorter durations. The number of wells that completed drilling and the number of findings have been increasing, but not to the same levels as in 2014. 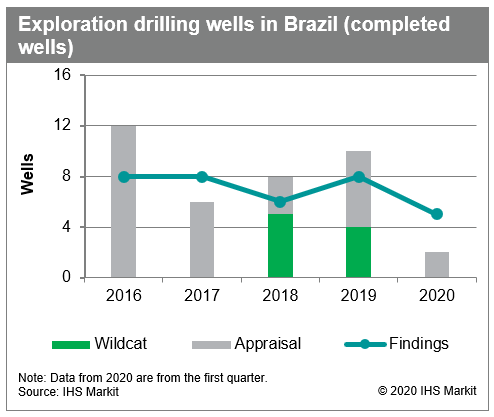 Now, activity is likely to be slow with fewer wells than planned, but unlike the previous downturn, drilling may still occur in new-field wildcats. We do expect that operators will maintain operation of contracted rigs since the day rates are low. However, the big question is how much time operators will take to start drilling in new blocks, and in which basins. Some activities by Petrobras and international oil companies have been indicating that operators will maintain their focus on the presalt Santos Basin, followed by the Campos Basin. Shell has just started drilling a well in Saturno Block, ExxonMobil will likely drill two wells (one in Titã in the Santos Basin and the C-M-789 block in the Campos Basin), and Petrobras will return to the Campos Basin to drill exploratory wells in Naru and Dois Irmãos. 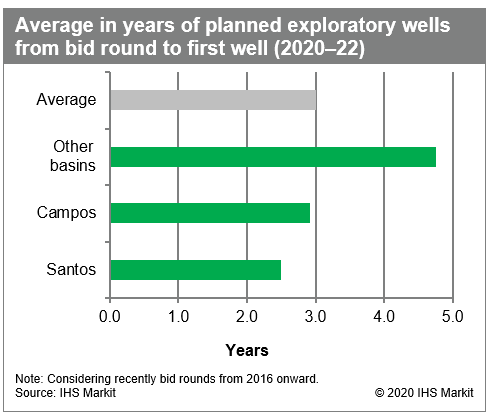 Figure 2: Average in years of planned exploratory wells from bid round to first well (2020-22)

Owing to these market conditions, suppliers are facing cash flow problems and debts. So far, most of the international suppliers have announced some measures, such as laying off workers, scrapping some units and stacking others as operators have already postponed or canceled some tenders, and terminating some contracts early. Diamond Offshore, for example, has filed for Chapter 11 bankruptcy. Even though all national managers have recently been under capital and debt restructuring, their scenario is relatively better since all of them have recently secured contracts.

Renegotiations have started, but we believe that further cost reductions, as took place before, are unlikely since companies are still recovering from the crisis, and with little margin. The cost-cutting negotiations in the past—in a scenario in which companies had some "fat" to trim—cannot be repeated without dramatic consequences for the sector.

For more information on this market, please read our reports Brazil market analysis: What are the main impacts of the turmoil in the supply chain and projects? and OSV market in Brazil: Recovery postponed.

What are the market drivers of #solar and #offshore #wind installation growth moving forward? Our experts discuss 2… https://t.co/xlB2A0hJT0

Japan, South Korea, and Taiwan plan to add ~28 GW in #offshorewind over next decade--from less than 1 GW today. W… https://t.co/X1H9N7yCAC