The Asia-Pacific Manufacturing Outlook in 2021

The Asia-Pacific manufacturing sector has shown a considerable upturn since the fourth quarter of 2020, with latest IHS Markit manufacturing PMI survey data showing strong momentum in many APAC economies in early 2021. With buoyant APAC GDP growth of 5.8% forecast for 2021, this is expected to underpin rapid expansion in manufacturing output this year.

The manufacturing sector in many Asia-Pacific (APAC) economies has shown a significant rebound since September 2020, as lockdown measures have been significantly eased in many nations as domestic pandemics have been stabilized. While some Asian nations such as Japan and Malaysia have had new waves of Covid-19 cases in recent months, the overall momentum of manufacturing output across the region has shown a substantial recovery.

The outlook for manufacturing production in 2021 is underpinned by the rapid expansion forecast for world economic growth, at a pace of around 5% y/y. In the APAC region, GDP growth is expected to be even faster, at around 5.8% y/y in 2021. A key driver for the rapid pace of expansion in the APAC region is expected to be a buoyant pace of economic growth in China, at around 7.6% y/y in 2021. In India, a substantial economic recovery is also expected in fiscal 2021-22, with GDP growth of 8.9% y/y.

Expansion in manufacturing industries led the IHS Markit Asia Industry PMI rankings for January 2021, occupying the top five places. The automobiles & auto parts sector topped the Asia PMI sector output rankings in January. It registered the fastest rate of growth of all categories for the third time in the past six months. Household & personal use products and machinery & equipment registered faster growth in second and third places respectively, followed by metals & mining and chemicals. Construction materials also showed moderate expansion, as construction activity improved in many countries as lockdowns have been rolled back. 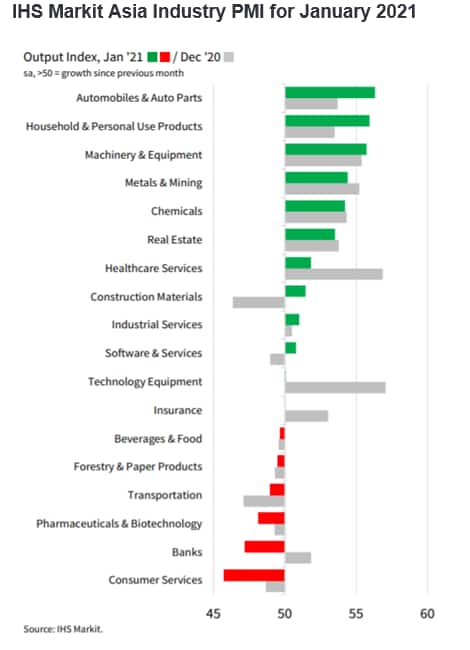 The recovery in APAC manufacturing has been led by China, which experienced a return to positive growth in industrial production already by the second quarter of 2020, with industrial output growth strengthening during the second half of 2020.

In Japan, the headline Flash Au Jibun Japan Manufacturing PMI rose from 49.8 in January to 50.6 in February, marking a return to expansion for Japan's manufacturing sector. Both output and new orders expanded at the fastest rate since December 2018, while new export orders also recorded positive growth. 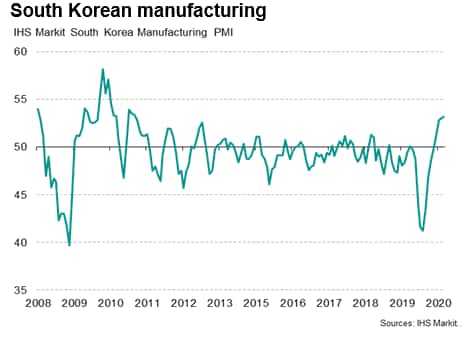 In the ASEAN region, manufacturing output has also shown a substantial rebound in recent months, helped by an upturn in exports as well as improving domestic demand. 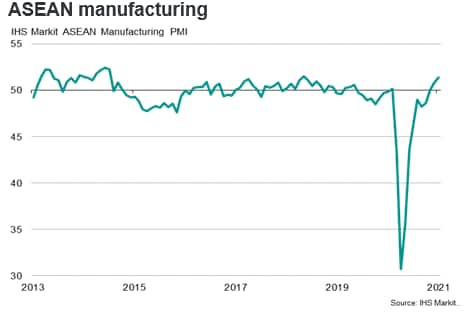 The Indian manufacturing industry has also shown considerable recovery since September 2020, as domestic consumer spending has strengthened, with the latest IHS Markit India Manufacturing PMI for January showing a buoyant start to 2021, rising from 56.4 in December to 57.7 in January. In response to faster expansions in total sales and new export orders, companies have increased output at a more rapid pace. 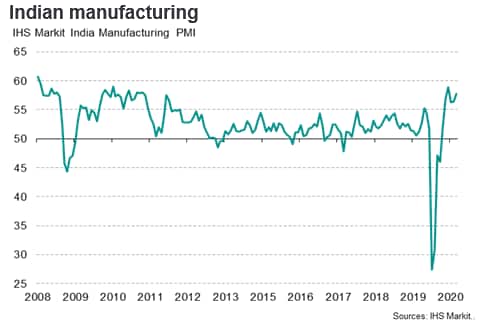 The IHS Markit Global Electronics Purchasing Managers' Index has signaled a strong rebound since mid-2020 as global lockdowns were eased and consumer spending rebounded in many major economies. The IHS Markit Global Electronics PMI new orders index rose from a calendar year-to-date low of 35.0 in May 2020 to a level of 53.4 by January 2021, reflecting a significant recovery in new orders. This rebound in global electronics demand has been reflected in the recent industrial production and exports data for many East Asian economies with large electronics manufacturing output, including South Korea, China, Vietnam, Singapore and Malaysia. 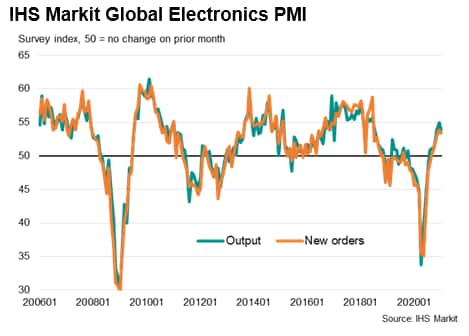 Following a severe slump in the Asian auto sector during the first half of 2020 due to pandemic lockdowns in major economies, including China and India, the Asian auto sector has rebounded significantly during the second half of 2020 and early 2021. This is reflected in the IHS Markit Automobiles and Auto Parts Output PMI, which has shown strong expansion in recent months. 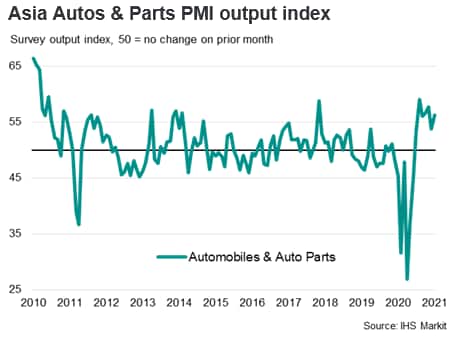 With rapid world growth forecast for 2021, the APAC manufacturing sector is expected to show robust expansion. The combined impact of a recovery in domestic demand across many major APAC economies combined with strong export growth to major global markets outside of APAC, notably the US and EU, will drive the expansion in manufacturing production. With rapid GDP growth forecast for China, India and ASEAN, many sectors of Asian manufacturing are expected to lead the near-term economic recovery.

The Asian electronics sector, which accounts for a significant share of manufacturing production and exports for many East Asian economies, is already showing buoyant growth as the pandemic continues to drive rapid growth in demand for products such as laptops, while global 5G rollout is also boosting demand for new smartphones.

The Asian auto sector, which suffered a severe slump in production in the first half of 2020 due to widespread global lockdowns, has also shown a substantial upturn in recent months as consumer demand recovers.

Due to the pandemic, the pharmaceuticals and medical equipment sector has also performed strongly in many Asian economies, including China, India and Singapore. Other sectors that are also showing expansion include household and personal use products, machinery and equipment as well as chemicals.