Toyota Thailand has started an electric vehicle (EV) sharing service in Bangkok, according to a report by Bangkok Post. The automaker partnered with Chulalongkorn University to launch its EV sharing model to be used intra-campus, with an investment budget of THB50 million (USD1.5 million). The service started on 1 December with 10 units of the Toyota Coms ultra-compact EVs manufactured by Toyota Auto Body, and an additional 20 units of the ultra-compact EV will be introduced by mid-2018. "Toyota has joined hands with Chulalongkorn as this area sees 100,000 people per day, so there is are plenty of opportunities for car-sharing demand because of insufficient parking lots and expensive parking fees," said Toyota Thailand chairman of the board Ninnart Chaithirapinyo. "Our phase-one timeline is December 2017-November 2019 to study and research user behaviour, while the second phase will commercial, with involvement from interested partners to invest and expand operations," said Chaithirapinyo. The EV sharing service is available from Monday to Friday between 7 AM and 7 PM. Interested users can register via its mobile application for a THB100 fee, and get 100 usage points. The service fee is THB30 for 20 minutes of driving and after that THB2 per minute will be charged. Meanwhile, the move to implement the EV sharing service on the Chulalongkorn University campus is a positive step towards addressing the country's air pollution problems and traffic congestion issues. 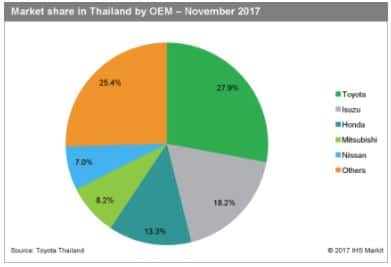 Eco-cars are gaining in popularity in the country. According to data released by the FTI, sales of eco-cars in Thailand during the first 10 months of 2017 went up by 32.8% y/y to 120,019 units. The second phase of the country's eco-car programme was announced in 2013, with the aim of manufacturing 1.58 million units. The minimum output capacity for eco-car models approved in the second phase is set at 100,000 units a year within five years of production, and excise duty on an eco-car is levied at 14%, while those compatible with Euro V emission standards can enjoy a 12% rate. New phase-two eco-cars must emit no more than 100g CO2/km, down from 120 g/km of CO2 for existing eco-car models. Fuel efficiency must be 4.3 litres/100 km, up from 5 litres in the first phase. Engine displacement should not exceed 1.3 litres for gasoline (petrol) models and 1.5 litres for diesel models.

Furthermore, demand in Thailand for alternative-powertrain vehicles, including electric vehicles (EVs), hybrids, and plug-in hybrid electric vehicles (PHEVs), is expected to grow in the coming years. The Thai government has announced excise tax rate changes focused on increasing the adoption of such vehicles in the country. The government is also setting up infrastructure to support such vehicles. It aims to have 1.2 million EVs and PHEVs on the country's roads by 2036. The incentives and infrastructure will help Thailand to remain an attractive destination for global automakers producing alternative-powertrain vehicles. Thailand is also attempting to revise its free-trade agreement (FTA) with China and hopes to implement a 0% import duty on EVs. At present, a 20% import duty is charged on EVs imported from China and Japan, and an 80% duty on EVs imported from the United States. The import duty on vehicles in Thailand is fairly high unless the vehicle is covered under bilateral agreements. A reduced import tax in Thailand under the FTA would help open up the market and create demand for EVs produced by Chinese automakers.

We expect demand in Thailand for alternative-powertrain vehicles to grow in the coming years. We forecast that annual production of such vehicles will increase to over 46,000 units in Thailand by 2020, up from 13,537 units in 2016.

The Automotive Manufacturing Disruption Index from IHS Markit has crept back up again to the mid-forties from the l… https://t.co/ExTEPeQDiD

Looking at new vehicle registrations at the state level, the three states with the greatest improvements in retail… https://t.co/8VwfBXUHaE