Texas to outshine California in utility scale PV installations in 2020

As COVID-19 continues to cast a cloud on industries around the world, the utility scale PV segment in the United states has continued to grow despite the pandemic and policy challenges the industry has been facing.

In the southern region of the country, PV project installations have surged mainly through utility driven demand. IHS Markit forecasts that the Southeast and the Southwestern regions in the United States will account for 31% and 23% of total utility-scale demand from 2020 through 2024, respectively. Opportunities for large scale utility PV projects in the South are vast, given the region's strong solar resource and high land availability. During the 2020-24 period, demand will continue to come from large procurement programs directed by utilities, along with demand generated by the Public Utility Regulatory Policies Act (PURPA) mechanisms in states like North and South Carolina. 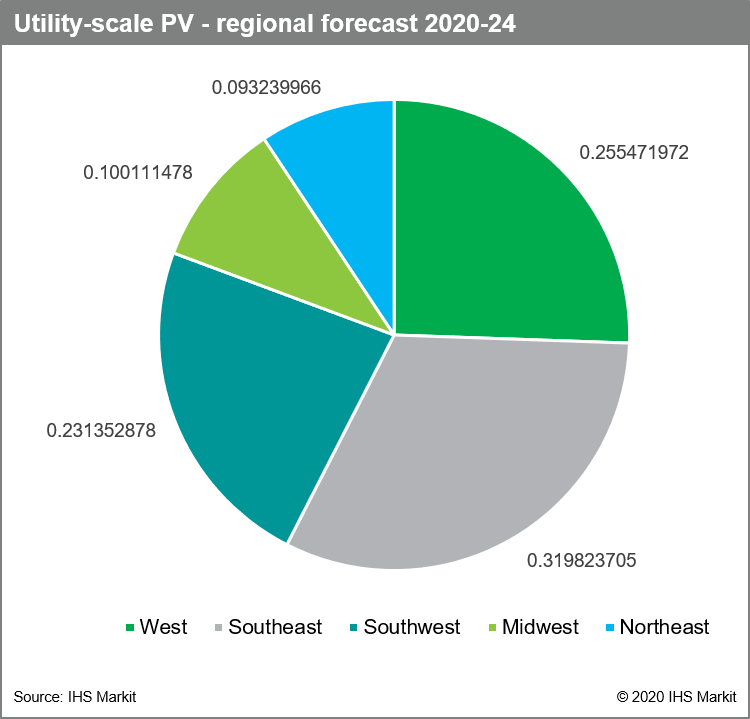 Texas established a voluntary RPS goal in 1999 of 10 GW of renewable energy generation by 2025. The state was able to exceed that goal in 2009 due to the large number of wind projects put online. Like many southern states, Texas does not have a statewide policy to promote solar. Historically, demand for PV has stemmed from the state's two large public utilities, Austin Energy and CPS Energy, both of whom have mandated RPS goals. This has changed in the past few years, with large developers spearheading the development of massive utility scale plants.

As the installed base of PV has grown in Texas, a flurry of investors have become active in the market. At the end of July 2020, Japanese gas utility Tokyo Gas announced its acquisition of a 631MWdc PV farm in Texas which is expected to come online in 2021. At the beginning of August, J-Power and AP Solar announced they had entered into a joint venture (JV) to develop a 400 MWac project in the state which is expected to be completed in 2023. Recently, state utility, CPS Energy announced it will seek to install 1 GW of solar to bring the utility closer to its 50% by 2040 goal. Financial closings have also been taking place during COVID-19, with Recurrent Energy recently securing funding in July for its 327 MWdc plant in West Texas, which will deliver power to Anheuser-Bush under a Power Purchase Agreement (PPA).

Declining PV system costs, the state's deregulated electricity market, a streamlined permitting and connection process, transmission lines designed to handle renewable power, and the vast land and solar resources have made Texas an ideal place for solar to flourish.

Utility-scale construction has continued to move forward throughout the state since lockdown measures began to be enacted in March, as it was quickly deemed an essential service. Although a handful of projects have reported delays due to COVID-19, most of the Texas PV pipeline is expected to be completed this year. IHS Markit expects utility scale projects in Texas to account for 96% of large-scale PV installations in 2020 totaling 3 GWdc, by contrast, California is expected to install over 2 GWdc of utility scale projects in 2020.

The resiliency of the US PV industry not only lies at the federal and state level, with policies like the Investment Tax Credit (ITC), PURPA, and state-level Renewable Portfolio Standards bolstering renewables. The industry's strength is also due to decreasing solar capex costs, attractive wholesale power prices, and voluntary cost competitive procurement by utilities that have further encouraged the growth of PV in the country.

IHS Markit estimates that by the end of July 2020, the United States had installed nearly 6 GWdc of large-scale solar installations, 4 GW more than what was installed by July of last year. Moreover, over 6.5 GWdc of utility PV projects are under construction, all expected to be completed this year. However, the strength of this segment has not translated to residential and commercial installations. The distributed PV segment in the United States is expected to be impacted the most by COVID-19 due to the challenges faced with its in-person sales approach. Furthermore, many individuals and businesses will push out making long-term investments in PV in their homes or businesses due to the uncertain economic environment.

The PV market in the United States has not only had to face the challenges brought on by COVID-19, but also protectionist policies that have increased tariffs on virtually all components that make up PV systems. For example, in Q2 2020, the average sales price of a mono facial PERC module in the United States stood at $0.35/W, while the price outside the US fell to $0.23/W. Notwithstanding the premium in the US market, the country is still one of the leading solar markets in the world, with cumulative installations reaching over 76 GWdc to date.

While the ITC has been an important incentive for tax equity investors to finance renewable energy, investor-owned and public utilities have seen the opportunity and cost advantages of solar. Through their Integrated Resource Plans (IRPs) and Request for Proposals (RFPs), many states have maintained a robust PV pipeline. Solar is also attractive to investors in search of low-risk and stable-yield opportunities.

Several utilities across the country have set varying renewable energy goals through 2050, indicating that the PV market will continue to grow even as the ITC steps down in 2024. For example, Duke Energy Corp. is seeking to reduce its carbon emissions at least 50% by 2030, while Xcel Energy is aiming to reduce company-wide emissions by 80% by 2030. Dominion Energy hopes to achieve 100% net zero greenhouse gas emissions by 2050, and in its latest IRP, the utility is looking to add between 7 to 19 GW of solar in the next 15 years.

Corporations have also helped the expansion of large solar in the United States. At the end of 2019, Google announced it was partnering with AES Corporation to push renewable projects forward in the United States. Recently in its latest RFP, AES is seeking to award contracts for up to 1 GW of new renewable power. Similarly, Facebook and Rocky Mountain Power announced they would work together to build nearly 700 MW of solar projects in Utah.

The impetus of the utility-scale PV market in Texas and across the country proves that the appetite for solar remains strong through the near term. According to IHS Markit's Solar Deal Tracker, the United States is estimated to have a utility-scale PV development pipeline of over 85 GW from 2020 through 2024.

Learn more about our research into clean energy technologies.