Tesla: Most shorted stock ever?

In a letter to employees dated August 7th − and published that same day to Tesla's blog − Elon Musk claimed that Tesla is the most shorted stock in the history of the stock market. He cited this as part of the motivation to go private, stating that: "being public means that there are large numbers of people who have the incentive to attack the company."

While Elon is certainly correct that there is a significant bet against the firm, and those short bettors have been far from quiet, the claim of "most shorted stock ever" is worthy of further scrutiny. 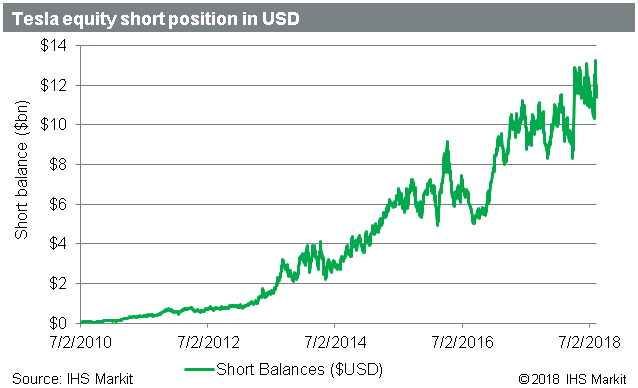 The peak short balance in Tesla, just over $13bn, was observed on August 7th, the same day as the blog post, and equates to just over 20% of the firm's market cap. Since then the declining share price and a 2m share reduction in shorts have taken the position down to $11.4bn on 32.8m shares. That is certainly an extreme reading in dollar terms, as the next largest US equity short position is $AMZN at $8.8bn, which is less than 1% of the firm's market cap. Of the 44 US equities with over $2bn short, MCHP, AMD, OMC & KSS are the only stocks where the short position is greater than 10% of market cap.

Looking back to the start of 2008, we could only find four examples of US equities which had more than $13bn short, all of which were related to short term corporate action events. Tesla is easily the most shorted US equity in dollar terms currently, but it is not, in the most literal sense, the most shorted stock in the history of the stock market. With that being said, the duration of the these positions was in each case less than a month and centered around a specific arbitrage opportunity, so while Tesla isn't the most shorted ever, it is being denied that dubious title more by technicality than by another firm having a greater negative sentiment expressed via short positions.

At present, the most shorted stock globally is Alibaba, whose over $25bn short balance dwarfs that of Tesla; however, a portion of that short position results from an arbitrage relating to the legacy Yahoo business, now renamed Altaba. While it may be unfair to compare the short position in Tesla to these corporate action related shorts, it's worth noting that part of Tesla's short position is motivated by hedges to convertible arbitrage positions. With $3.8bn in convertible debt outstanding, it's possible that a significant percentage of that value could be short the equity as a hedge.

Depending on how many of the convertible notes are hedged with equity short positions, Tesla may be closer in its short position to the 2nd highest US Equity, Amazon, which has $8.8bn in short balances. It's important to note, however, that the AMZN short is likely a hedge for many short sellers, rather than an outright bet against the firm's prospects. One way to analyze that impact is to look at the difference between a given firm's percentage of total market cap and percentage of total short interest.

Shifting to another popular measure of short interest, there are 26 US stocks which have had a greater percent float short in 2018 than Tesla's peak of 33% (observed in May), filtering to only look at stocks with $500m+ short positions. There are currently 42 US equities with > 33% float short overall. As a ratio to it's own float, shares outstanding or market capitalization Tesla is not the most shorted US equity.

Taken together, the claim of "most shorted stock in the history of the stock market" is not literally true in dollar terms, though it's fair in the sense that there has not been another US equity short position greater than $10bn which lasted for more than a quarter.

As Tesla and Elon Musk steadfastly remain in news headlines, IHS Markit will continue to keep a close eye on short sellers.