Tesla: Bears in the bond market

A storm of negative headlines has recently surrounded electric automaker Tesla. While the firm's operations have been called into question, there has also been increasing scrutiny of the firm's outspoken CEO Elon Musk and his use of Twitter. Critics of the firm have also been outspoken, often using Twitter as a platform as well. Some of those critics are also betting against the firm, making Tesla the most shorted US equity and pushing the short position in its bonds above $334m. Additionally, there has recently been a market made for credit default swaps referencing the firm's debt obligations. 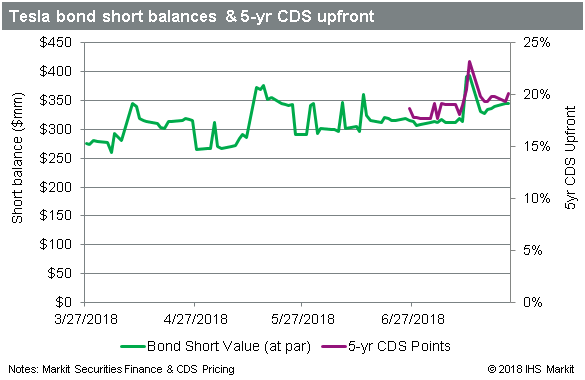 There has been increased interest in trading CDS on Tesla since late June, at which point the five- year CDS was offered around 18 points upfront. That contract is similar to a bond investor insuring $1m of Tesla bonds against default for five years by paying $180k upfront, along with standard quarterly payments amounting to another $10k per annum.

The upfront points on the offer widened during the 2nd week of July, peaking above 23 points on July 12th following reports that former employee Martin Tripp had filed a whistleblower complaint with the SEC. During the same week, Elon Musk's Twitter account came under increased scrutiny following tweets about the Thai soccer team rescue in Thailand − in particular, tweets regarding rescuer Vern Unsworth. Elon was also revealed as a large donor to a conservative PAC that week, anathema to many of his supporters.

Over the next week the CDS points on the offer were range bound between 19-20 points, remaining well above where they were offered in late June. That changed last Monday, following an article in the Wall Street Journal which reported that Tesla had reached out to suppliers to request cash back on previous transactions to help the firm achieve profitability.

The news resulted in CDS levels rising back above 20 points upfront, as concerns continued to mount regarding Tesla's cash position. To put that in some perspective, the buyer of credit protection is paying 25 percent to insure the bonds against default over five years, during which time the bonds have an effective yield of approximately 36 percent, based on buying at current discount to par.

While that seems like a steep price to pay, it's important to note that the CDS is illiquid, in part owing to the difficulty market makers face in hedging the contracts. That challenge is acute because virtually all available Tesla bonds have already been borrowed. 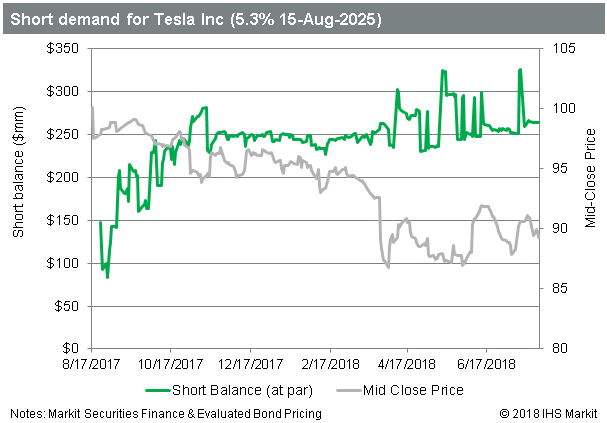 Credit shorts were active in the 5.3 percent 2025 bond from the initial issuance in August 2017, borrowing 8percent of the total issue size within the first week following the offering, or $140m at par. The short position in the 2025 bonds, implied by borrowing demand, has increased to $264m at present, or 14 percent of the issue size.

While that suggests there's another 86 percent of the issue to go, that isn't really the case, as owners of the bonds have only put 14 percent of the issue into lending programs where they can be readily borrowed by short sellers or market makers. The utilization of that lendable supply has not been lower than 95 percent in 2018, despite the size of the pool increasing by $40m.

When the firm's rating was downgraded by Moody's on March 27th, the bonds sold off and reached the low of the year on April 2nd, below 87 cents on the dollar, though they've since rallied back above 89.

The spikes in short demand are sourced from the inter-broker market for borrows and have recently coincided with the spikes in CDS points. Following the downgrade there has also been an increase in borrow demand for the firm's other debt issues, including the converts, and the total balance across the issues is currently $344m.

Assuming the borrow rate will be constant, over the life of a five-year bet against the credit an outright bond short would pay approximately 50 percent of the notional, while an owner of CDS would pay 25 percent, though in the latter case the majority of that cost must be paid upfront. While the bond short cost includes manufacturing the coupon, it's worth noting that there is nearly parity between the bond borrow fee and the CDS total cost spread, over five years.

The CDS trade would also increase liquidity risk as the bid-ask spread has been 4-5 points wide, suggesting an investor would lose 20-25 percent of the investment to trade out of it. Assuming the bond borrow rate will be constant may also be a stretch, though it's already the most expensive to borrow USD corporate bond with at least $200m in open balances.

The negative sentiment regarding the firm's more than $8bn pile of debt seems to be ratcheting up, and signals from the bond market are often viewed as having a greater significance given that it primarily consists of institutional investors. However, the credit short pales in comparison by scale with the equity short position, which is just over $10.5bn at present.

The equity shorts reduced their position size by 8m shares in the first three weeks of June, while the share price increased by more than 20 percent. As concerns over Elon's prophecy of the "short burn of the century" declined in early July, along with the share price, short positions increased by 5m shares and have remained relatively steady at 35m shares since. This past week saw a 350k share increase, putting the total at 35.4m shares.

Given that many short sellers have stated that their position is expressed through long-dated put options, it's fair to assume that some portion of the daily gyrations in short interest are the result of option market makers adjusting their hedges in response to price changes. A portion of the existing equity short is likely to be hedges associated with arbitrage trades involving the firm's $3.7bn in outstanding convertible issues. 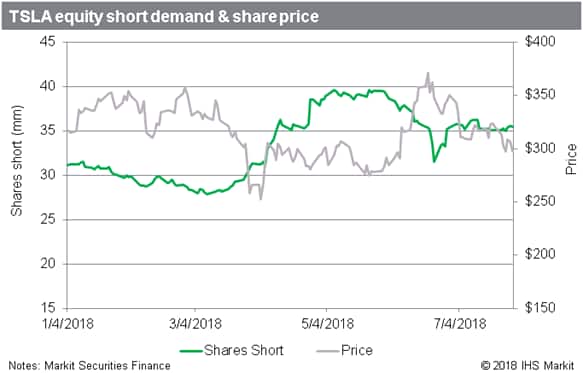 The nascent market for Tesla CDS, taken together with the outstanding short position in the bonds and equity, suggests that bearish sentiment regarding the firm's prospects is increasing. Elon Musk's Twitter rants have generally emboldened critics, though it has been reported that blogger Montana Skeptic decided to delete his account after Elon called his boss and threatened a lawsuit. On the other end of the spectrum, the Wall Street Journal's Dan Neil deleted his Twitter account after blowback regarding a positive review of the Model 3.

While the Twitter theatrics have been ongoing, the tangible concerns regarding cash flow - perfectly encapsulated in the supplier refund request - are pushing up the cost of insuring the firm's debt against default.

The firm is set to report Q2 earnings on August 1st, with analysts expecting a loss of $2.78 per share on $3.9bn in revenue, according to FactSet. The Q1 conference call, on which Elon referred to a sell-side analyst's question as "bone-headed", briefly sent the shares down 5 percent, though they swiftly recovered.

There is certainly a heightened anticipation for the Q2 call, which is scheduled for August 1st at 2:30pm PDT.