Territorial destruction of the Islamic State will not end ongoing threat

The imminent territorial destruction of the Islamic State will not end the group's pervasive ongoing threat, both locally and internationally. With the recent losses of Deir al-Zour and al-Bukamal in Syria and al-Qaim in Iraq, alongside the final offensive targeting Rawa, the Islamic State will likely cease to be a territorial entity in Iraq and Syria by the end of this month.

Despite the hope - or perhaps misguided expectation - otherwise, the defeat of the Islamic State as a territorial entity will not represent its defeat as a non-state armed group, nor put a halt to its armed campaign. Instead, the group will almost certainly transition from a pseudo state back to an underground armed insurgency, remaining capable of conducting asymmetric attacks against security forces in Iraq and Syria and continuing to undermine security and central governance.

Indeed, this process has been underway for the past 12 months at least, as underlined by data recorded by JTIC. Between October 2016 and September 2017, the Islamic State conducted 5,349 attacks worldwide, resulting in a total of 8,139 non-militant fatalities. This represented an interesting change from the preceding 12 months, comprising a 38.3 percent increase in attacks but a 21.8 percent decrease in non-militant fatalities.

The fact that the Islamic State has been conducting more attacks but causing fewer fatalities is indicative of the group's transition to asymmetric insurgent operations in areas of Iraq and Syria that have been recaptured from it by state or non-state adversaries. These operational methods mirror the tactics employed by the group's affiliates in other parts of the world as the Islamic State strives to build the conditions for establishing territorial control. 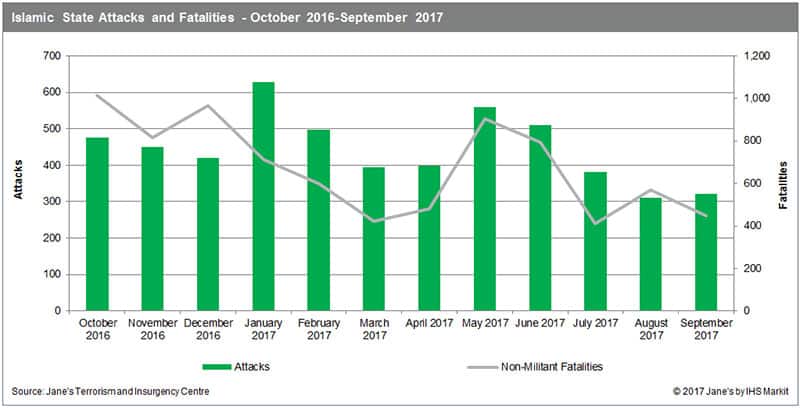 The Islamic State will seek to maintain some semblance of its former governance structure as a shadow state, imposing summary justice through abductions and executions, and portraying itself as exercising power in areas under government control.

The continuation of a shadow state campaign is paramount for the Islamic State's future ambitions, which remain tied to the establishment of a lasting and expanding territorial caliphate. The group has portrayed its losses of territory as part of a drawn-out long-term battle against crusading, apostate forces, and it will aim to retain the capabilities to reorganize a wider campaign in the future to regain the territories that it has lost as well as expand its borders further.

While the imminent territorial destruction of the Islamic State is an important stage in the ongoing fight against the group, it will mark a new phase of the conflict rather than its terminus.

The denial of a territorial base for the group from which it can impose its fundamentalist interpretation of Islam on a captive population, stage further territorial expansions, and inspire, facilitate, and conduct operations worldwide has justifiably been the pre-eminent focus of the various ongoing campaigns against the Islamic State. But it is of vital importance that the momentum achieved is not squandered by mistakenly assuming that the threat posed by the group has ended.

Focus must turn to counter-insurgency efforts to further degrade the capabilities of the Islamic State while concurrently addressing the political and socio-economic conditions in which the group has thrived and contrived to generate a degree of popular support, at least initially.

There is a very real danger that the territorial defeat of the Islamic State will precipitate the emergence of new conflicts and crises among its multiple adversaries, both in Iraq and Syria, which will further generate insecurity and instability and thereby recreate conditions that the group will exploit and exacerbate to facilitate a territorial re-emergence.

Without a concentrated and comprehensive ongoing approach to tackling the Islamic State, both directly in its primary operational areas and its indirect influence in the West, there is every chance that the territorial campaigns against the group currently being concluded will have to be refought in the future.

To request a demonstration or for more information visit Jane's Terrorism and Insurgency Centre.