The US Census Bureau's most recent population estimates show that the rate of US population growth continues to slow. In 2019, the "natural increase" in the population, the number of births minus the number of deaths, totaled less than 1 million for the first time in at least four decades. At the same time, immigration to the US has continued to slow due to heightened enforcement of related laws and a reduction in allowances for legal immigration. In addition, the Census report included an updated estimate for immigration between 2017 and 2018, which came in 277,000 below the initial estimate. That downward adjustment carried over into a lower estimate of immigration for 2019, as well. The slowdown in immigration is most evident in California, Florida, New York, and Texas; those four states combined account for nearly half of net migration into the United States each year.

The four big "winners"—Arizona, Idaho, Nevada, and Utah—all experienced very solid natural increases, along with high levels of net domestic in-migration. Arizona and Utah also experienced an influx of international migrants, while Idaho posted a modest increase and Nevada saw the aforementioned decrease in that category. All four states feature relatively low costs of living and are attracting residents from nearby California, which had the highest net out-migration of any state. 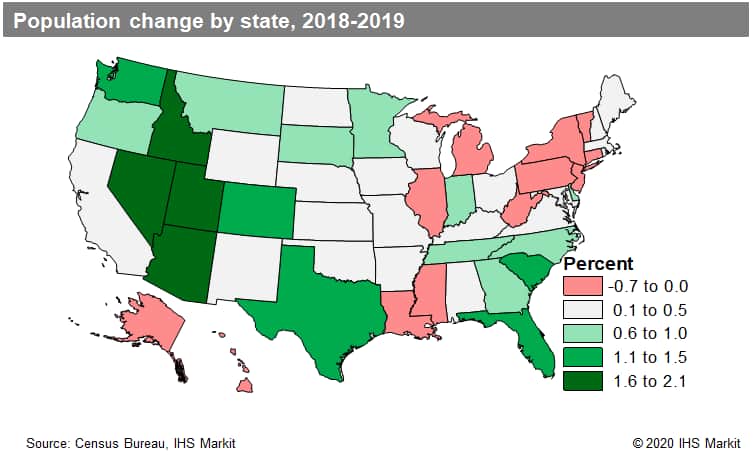 In the next tier of higher-growth states, including Texas, Florida, South Carolina, Colorado, and Washington, we see the continuation of a long-term trend of states in the South and West experiencing higher population growth. All of the states in this category are experiencing high rates of both domestic and international in-migration, with generally high rates of natural increase. Most also qualify as low-cost states.

The cost differential among states, especially in terms of tax rates, has been made even more critical by the change in the federal tax treatment of state and local taxes (SALT) implemented at the end of 2017. The cap on SALT deductions imposes an added cost on residents of states with relatively high taxes, most notably California, New York, and New Jersey.

The number of states posting annual population declines has risen over the past decade, from just one in 2010 to ten in 2019. Broadly speaking, these states follow the pattern of states in the northeast losing population due to a combination of relatively older population and higher costs of living. Louisiana and Mississippi do not fit the geographic pattern, but feature low rates of employment growth and relatively high rates of poverty. The slowdown in immigration is holding down population growth in these states, along with high rates of domestic out-migration.

West Virginia experienced the greatest population loss in relative terms in 2019, with a decrease of 0.7%. The state registered a rare trifecta of negative natural increase, negative international migration, and negative net domestic migration. The state's economy has struggled to fill the void created by the decline of the coal mining industry, and a relatively older population makes it difficult for births to keep pace with deaths. On top of those structural issues, the state has been among the hardest hit by the epidemic of addiction to opioids and related drugs, which has caused a spike in deaths in the working-age population. The state's population losses among the younger age cohorts due to premature deaths and out-migration will only exacerbate the shortfall in births over the next several years.

The new state-level population data are in line with trends established over the past few years, but with a more pronounced deceleration in immigration growth. This slowdown is expected to continue, barring a change in the Trump administration's approach to immigration. States in the southern and western regions continue to see more rapid population growth than the north and east. The states with higher population growth tend to have higher economic growth, as having more people translates into higher demand for services as well as a larger labor force for employers. Population growth also stimulates demand for new housing, providing an added economic boost.

Looking at the broader picture, a trend of weaker population growth overall and a decline in natural population increase has negative implications for economic growth at both the national and state levels, as both aggregate supply and demand are partly a function of population. Federal and state tax revenues and spending levels will be affected by the total number of people and the age distribution of the population, with budget obligations for pensions, medical care, and other social services becoming more difficult to fund as the relative age of the population increases. Our regional forecasts are updated regularly to reflect changes in demographic conditions.

It should be noted that these Census estimates are taken from the annual American Community Survey, which is a less extensive survey effort than the decennial Census, which will take place this year. The response rate for the ACS has slipped recently, leading to concern that population is being underestimated. For now, though, the estimates represent the best information available to gauge population growth.