As the global Oil & Gas Industry faces unprecedented market conditions, challenges pile up in Argentina. Besides the plunge in crude oil price, dragged by the nose-dive in demand, local industry faces a hesitating government with little room to maneuver, lack of infrastructure and even difficulties to sell its crude oil in the international market. The country suffers from serious shortage of dollars and budget constraints. As a result, in mid-2019 the government suspended the gas subsidies that boost drilling activity and production in its prolific shale formation Vaca Muerta. The new administration, that took office in December 2019, pledges to prioritize the industry's development but has not announced an Energy policy so far.

The lack of appropriate infrastructure for gas outflow from the producing region limited the development of the resources through 2019, and will keep limiting it for years to come, as the construction of important pipelines are on hold, such as the Tratayén-Saturno gas pipeline. With the current scenario a new issue was added to the list: the country's small storage capacity. Operators then turned to the international market to sell its crude oil, but they realized that it would not be easy to find buyers for a little-known product, as the Medanito type has been sold mostly in local market.

To keep the industry alive, the Argentine government is considering creating an internal crude oil price above market levels - the so-called barril criollo. The exact price level is still unclear but will probably be around US$45/bbl. This measure could give the industry the possibility to survive the storm, but it will not solve the demand issue. Operators will still adjust their portfolios, focusing on short term and most responsive assets. New projects down the pipeline are likely to be postponed, while currently producing projects with high operational costs are natural candidates to a slow down.

This trimmed portfolio will naturally yield to a smaller well count, but the impact will not be the same for the whole supply chain. Recent developments and technologies applied in the well design are pushing for longer wells, with more compact frack stages. The consequence is that even with less wells drilled, the segments for which the demand varies according to the horizontal length and number of frac stages could see an early recovery. Among these segments is local sand, which could get back to 2019 levels in 2021, when activity first rebounds. In the following years, it keeps growing at a slower rate, until 2025 when new wave of projects goes full scale. 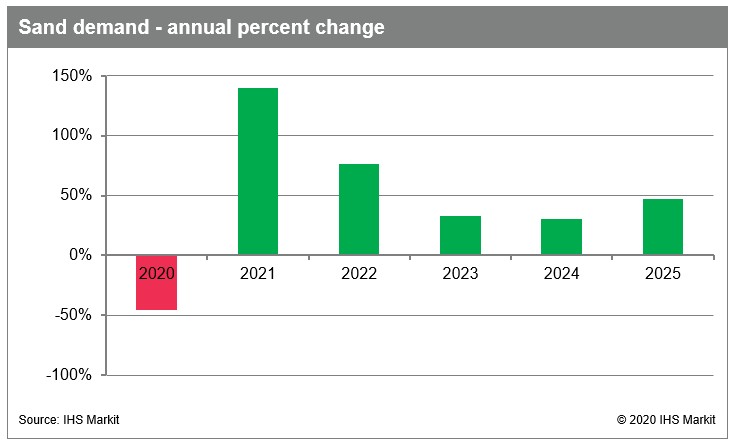 The Argentine sand market has had remarkable improvements over the last years, providing almost 900 thousand tons in 2019 from a varied number of suppliers, and has the capacity to respond to surges in demand. However, the sand is sourced far from the consuming region and is transported in roads and railways often in poor conditions. Investments in infrastructure and logistics could reduce completion costs at least by 10% only with sand transportation, playing an important role in total well cost reduction.

Learn more about our cost and technology solutions.

RT @EconomicsRisk: Sharpen your view of global threats and increased energy security at #Geostrategy2022, and gain a plan for turning risks…