The recapture of Deraa city, where the Syrian uprising began in 2011, follows two weeks of rapid territorial gains by the Syrian government in Deraa and Suwayda provinces east of the M5 highway, which include the Naseeb border crossing with Jordan. President Bashar al-Assad is winning the civil war and remains committed to re-establishing control over all of Syria, with backing from Russia and Iran. What remains of the Syrian opposition is now concentrated in the northwestern province of Idlib, where a Turkish military presence is deterring further government advances. 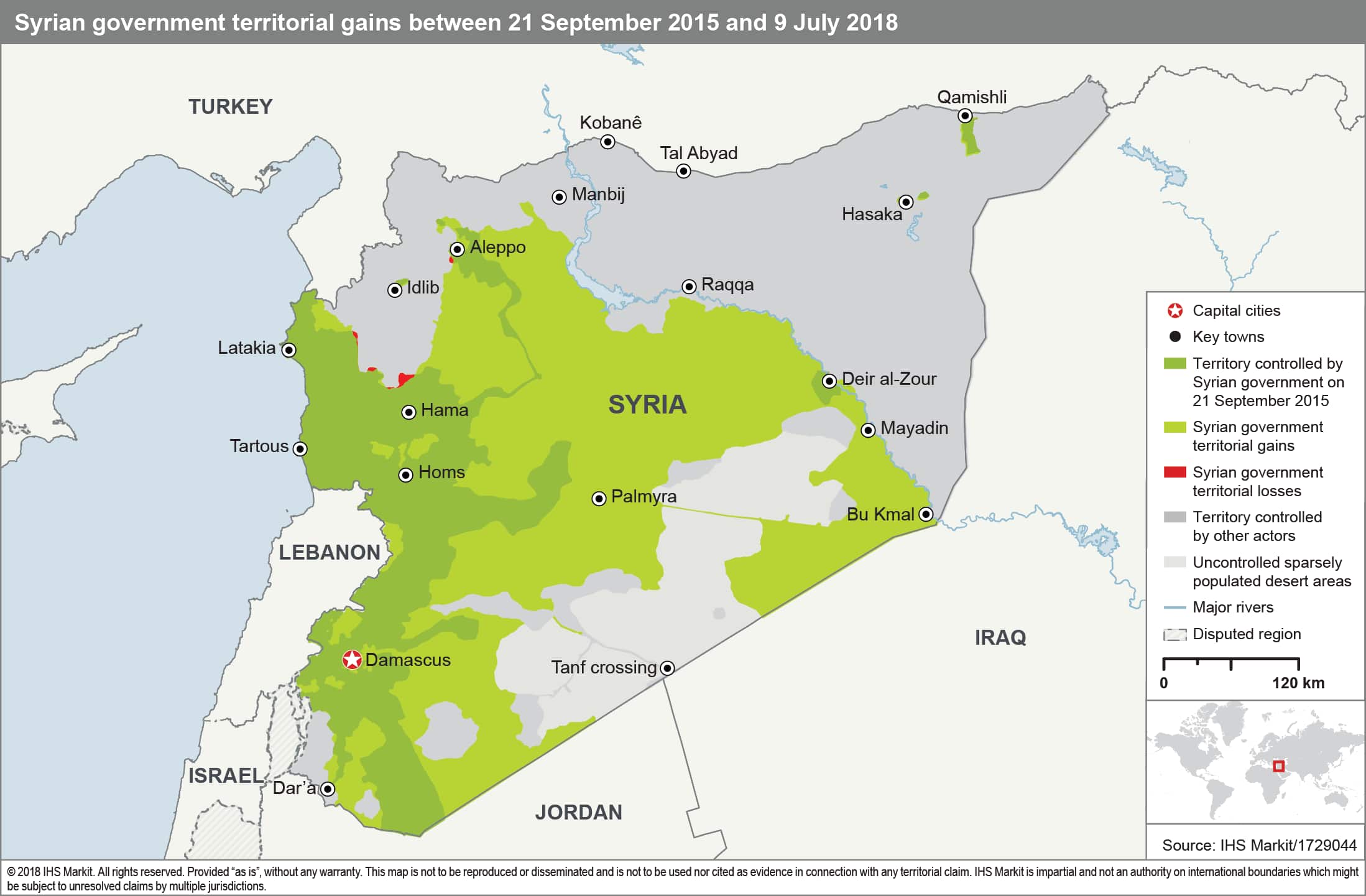 Reconciliation deals
Most of the areas recaptured by the Syrian government in Deraa province so far, including all of the border posts, were handed over by opposition forces as part of ongoing Russian-brokered talks with opposition leaders in southern Syria. A preliminary agreement made on 7 July resulted in some opposition groups reconciling and surrendering all of their heavy weapons to the Syrian government. Russian military police units would provide security in areas previously held by the opposition, similar to the deal reached in Aleppo in December 2016, and factions that were opposed to reconciliation were offered safe passage to the opposition-held Idlib pocket in northern Syria.

Within days of the deal being reached, however, both sides accused each other of breaching it. The so-called 'reconciliation' is being imposed on the opposition under threat of airstrikes, and leaves them with little choice but to agree to avoid destruction of their towns and villages. Those groups resisting reconciliation issued a statement on 8 July in which they formed the 'Southern Army' and called on all factions in the south to "join our army in defending our land and dignity".

The armed factions that are opposed to reconciliation, and up to 234,000 displaced civilians, according to the United Nations, are likely to be pushed into the demilitarized zone along Syria's border with the Israeli-occupied Golan Heights. Israel has made clear that it will not support the opposition militarily, and that it will not open its borders.

Risk of escalation on the Golan
Israeli Defense Minister Avigdor Lieberman stated on 10 July that Israel would not tolerate the deployment of any Syrian forces in the demilitarized zone between Syria and the Israeli-occupied Golan Heights, and would hold the Syrian government responsible for any 'terrorist infrastructure' (meaning any presence of Iranian or Hizbullah forces) established in southern Syria. The Separation of Forces Agreement of 1974 prohibits Syrian government forces from entering the demilitarized zone, which is around 80 km long and between 0.5 and 10 km wide, and limits the number of forces that can be deployed within 25 km of it.

There has been an increase in the frequency of exchanges of fire between Israeli and Syrian forces near the Golan in recent weeks. Israel destroyed three Syrian military posts on 11 July after it intercepted an unmanned aerial vehicle (UAV) which had entered Israeli airspace. On 6 July, Israel destroyed another Syrian military position after an errant mortar bomb landed on the Israeli side of the 1974 ceasefire line. This is in addition to the regular airstrikes Israel has been conducting against Iranian targets in Syria, most recently against Tiyas (T4) airbase in Homs province on 8 July. Israel stated that Iran must withdraw all of its forces and proxies from Syria after conducting the largest strike on Syria since the Yom Kippur war in May, destroying more than 50 allegedly Iranian targets across the country. This came in response to Iran launching 20 rockets at the Israeli-occupied Golan on 9 May. The Golan Heights are the main theatre for Iranian and Syrian retaliation for Israeli military activity in Syria.

Outlook and implications
IHS Markit assesses that Syria is likely to ultimately adhere to the 1974 Separation of Forces Agreement and stop short of moving into the demilitarized zone, which would almost certainly be met with Israeli airstrikes or artillery fire. Syrian forces are, however, likely to probe Israel's commitment to enforcing its warning by advancing towards the zone and engaging opposition forces located within it. In addition to the Russian-sponsored 'Tiger Forces', the ongoing operation west of Deraa city is being led by the Syrian army's 4th Armored Division, which is sponsored and influenced by Iran, and is likely to be accompanied by advisers from Iran's Islamic Revolution Guards Corps (IRGC). Israel is likely to conduct strikes against any suspected deployment of Iranian forces in southern Syria, and will most likely act to prevent any permanent deployment of the 4th Armored Division along the border with the Golan.

The demilitarized zone is not large enough to sustain a large number of opposition factions and displaced civilians indefinitely, and will be easily within range of government fire. The most likely outcome is therefore a negotiated ceasefire, with security provided either by the United Nations Disengagement Observer Force (UNDOF), who have a mandate to enforce the 1974 agreement, or Russian military police. This would enable a return of displaced civilians to their homes and the withdrawal of those unwilling to reconcile to Idlib province.

Israel will respond in kind to any stray fire into the Golan Heights, holding the Syrian government responsible, regardless of whether the fire was initiated by Iranian forces or non-state armed groups. The threshold at which major escalation becomes likely is if rockets fired from Syria land in Israel proper or cause Israeli civilian casualties. In that event, Israel's response would most likely be greater in scale than that following the 9 May rocket attack on the Golan, when it struck more than 50 Iranian bases in Syria. Such a strike would be aimed at forcing Assad to implement an Iranian withdrawal from Syria, and would carry a high risk of further escalation to a broader war with Iran, and potentially Hizbullah in Lebanon, if such a withdrawal is not achieved.

The encouraging news from our US team in their forecast update covered on @LogisticsMgmt https://t.co/QJTDiepAVy #economics

With the sovereign risk rating downgrade of 88 countries in 2020, the risk of non-payment for contract or trade-rel… https://t.co/0nHIpPxISN