Switzerland-based u-blox, a leading vendor of cellular Internet of Things (IoT) and positioning components, announced plans on January 20 to acquire the cellular IoT module and modem business of SIMCom Wireless Solutions from Shanghai, China. The announced offer is for $52.5 million, and will include the cellular IoT module products and solutions of SIMCom as well as its patents, R&D and sales staff, and customers. U-blox expects the deal to close within the next three months, by the end of March.

SIMCom: a large but troubled entity

SIMCom has had a long, but challenging, history in the cellular IoT module market. The company rose to a strong second-place position in terms of shipments during the 2000s, behind Siemens Wireless Modules (which eventually became the M2M unit of Gemalto. SIMCom achieved its No. 2 ranking largely on the basis of government programs in China seeking to provide fixed wireless terminals (FWT) to the country's villages and rural communities, in an effort to bridge the urban-rural telecommunications gap.

However, SIMCom struggled to translate its success in the Chinese FWT landscape to broader-based traction in the cellular IoT market, after mobile phone penetration in China reduced the need for FWT units. The final year in which SIMCom was able to achieve a second-place finish in the market was back in 2010. From 2011 to 2015, SIMCom was in fourth place, IHS Markit estimates, although it rose to a virtual tie for third place with Sierra Wireless in unit shipments in 2016.

In recent years, SIMCom has both competed extremely aggressively on price-recording a 7.6% gross margin for its wireless modules segment in the first half last year-and entered the value-added services segment of the market by offering solutions for smart vending machines. Nevertheless, the company still has not gained significant traction outside of the Asia-Pacific (APAC) region, even when APAC-based competitors, such as Wistron NeWeb Corp. (WNC), Huawei, Foxconn, and Quanta Computer started to make inroads into the AT&T and Verizon module programs.

Probably the most telling indicator of the difficulties in execution for SIMCom can be gleaned from the official u-blox press release of January 25, as u-blox provided guidance of $75 million in increased revenue to be realized over the course of the three remaining quarters of 2017, stemming from the acquisition. The fact that SimTech Group Company Ltd., the parent company of SIMCom, had sold $75 million in revenue to settle for $52.5 million underscores that company management did not feel a viable path forward was possible for SIMCom in the cellular IoT module business.

Given the challenges described above for SIMCom, why would u-blox make this acquisition? There are five primary strategic reasons, IHS Markit believes, that suggest u-blox can take on the SIMCom business and make it a success.

Significant, but not transformative, impact to the cellular IoT module vendor competitive landscape

Assuming the acquisition closes, it will likely create a new market share leader. The combined share in shipments for u-blox and SIMCom during the first six months last year was 24.5%, ahead of Telit, Gemalto and Sierra Wireless. However, a crucial point to remember is the aggressively low price points at which SIMCom competes. On a revenue share basis, the combined companies would still only equate to 15.0% of the market, behind the three vendors just listed. 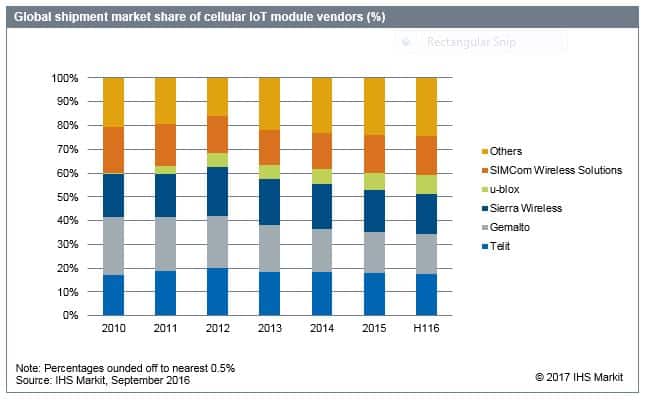 IHS Markit believes that the most immediate impact of the acquisition will be to increase the overall downward pressure on pricing in the market, as u-blox becomes able to amortize costs across a far greater volume of shipments and further leverage its differentiation in lean operations. This will have the following secondary effects:

All told, the acquisition is good across the board: for u-blox; for SIMCom and its parent company, SimTech Group; and for IoT developers. The only ones who won't take favorably to this development will be the traditional top three module vendors, who will likely find the road ahead to be just a bit more challenging.