Sweden is preparing for a general election on 9 September that is likely to result in a fragmented political landscape that will challenge the country's traditional consensus-driven politics.

Sweden will hold a general election on 9 September. Opinion polls suggest that neither of the traditional center-left and center-right coalition blocs will secure a parliamentary majority. The far-right Sweden Democrats (Sverigedemokraterna: SD) is anticipated to gain the most, with its support varying from 18.5% to 24.2%, according to different polls. Nevertheless, IHS-Markit assesses that a mainstream minority government remains the likeliest outcome of the election, with SD continuing to be largely ostracized by the other political parties. The election comes during a period of economic vulnerability as the Swedish exchange rate has come under pressure due to market fears over political uncertainty. Any surprises in the election result will likely result in further weakening of the krona.

The decline of the center

The current center-left minority government, comprising the Social Democrats (Socialdemokraterna: S) and the Green Party (Miljöpartiet de Gröna: MP), was elected in 2014. It has managed to govern through the tacit parliamentary support of the mainstream center-right coalition bloc, the Alliance (Alliansen). During this period, Sweden has enjoyed strong economic growth (2.3% GDP growth in 2017) and a 10-year low for the unemployment rate (6.2% in July 2018). However, the refugee crisis in 2015 has shifted much of the public focus towards migration, resulting in a historically low support for S. This shift has been compounded by a recent trend of escalatory violence between criminal gangs employing improvised explosive devices (IEDs) to settle conflicts, as well as highly publicized acts of vandalism by disenfranchised youth in the suburbs of Gothenburg, Malmö, and Helsingborg, where much of the population is of immigrant background.

This has fueled support for SD, which has consistently polled at approximately 20% and is poised to become the second-largest party in parliament. However, despite SD's expected success, it is unlikely to enter government. Both mainstream blocs have pledged to continue their practice of ostracizing SD, owing to the party's traceable neo-Nazi roots. Therefore, the likeliest scenario involves: a new mandate for the center-left coalition; an Alliance-led government; or a reconfiguration of existing political alliances, with S attempting to forge an alliance with smaller, centrist parties.

Whichever coalition prevails, the implications for business will be broadly similar and favorable, with taxation being the main exception. A center-left government, or S-led coalition, would place more emphasis on redistributive policies, including the introduction of a supplementary tax for banks and an increase of capital gains tax. Conversely, a Moderate Party-led coalition would focus on tax cuts, including income tax deductions for low-earners. Either coalition would be constrained by inadequate numbers in parliament, complicating policy-making. A more pressing issue is that any delay to government formation, or general uncertainty over the election result, could translate into growing market pressure on the Swedish economy and currency.

Sweden has achieved extremely strong economic growth since the previous election cycle. However, this election is being held at a vulnerable point in the economic cycle. At present, late-business-cycle economic vulnerabilities are being amplified by risky monetary policy. Cheap money is leading to growing debt levels and a busy housing market. Since 2015, immigration policy has prevented exorbitant stress on the labor market. Instead, Sweden has experienced a long tail to its business cycle, as firms have not been constrained by the labor market, which has been a core factor in limiting the inflationary effects of interest rate policy. 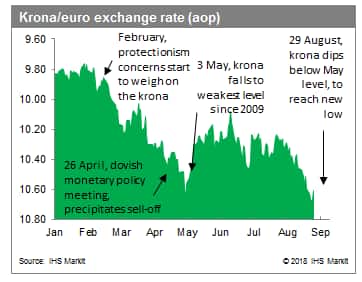 The real concern is the exchange rate. Despite the emergent Turkish lira crisis, the krona has weakened since the beginning of August, reaching SEK10.68/EUR1 on 29 August. The combination of concerns of an election result similar to that in Italy and no expectation of the central bank voting to raise interest rates at its meeting on 6 September is leading to extremely bearish foreign-exchange (FX) markets. The 29 August dip was reached following lower-than-expected monthly retail data, despite solid consumer confidence numbers, showing just how reactive the markets are at the moment. IHS Markit anticipates that FX traders have now priced in that rates will not change at this week's meeting. However, as this is a close election, a surprise in the polls could shock FX traders, prompting a sell-off and some extremes in volatility in over-night trading on 9-10 September. As Sweden has lost most of its current-account buffer against the euro in the past 12 months, the country's domestic capacity to address such a sell-off is limited. On the other hand, a smooth election cycle could defuse markets, setting the stage for the krona to strengthen as we head toward the expected rate rise in December.

Sweden's political landscape is poised to fragment further after the election, challenging the country's tradition of consensus-driven politics. Although SD is likely to be excluded from government, it would come at the price of a weak minority government that would struggle to set a clear policy agenda. A key indicator to watch is any leaks of backchannel talks signaling the traditional coalition blocs' readiness to re-establish a co-operation framework similar to the December 2014 agreement. Such an agreement would enable a high degree of governability under a minority government, without ceding too much ground to SD.

In terms of SD's ability to influence policy, an indicator to watch is the number of key positions that its members would occupy in parliamentary committees. These committees draft legislation, and through them SD would be able to exercise influence without being in government. However, given the party's relative inexperience, this influence would be largely limited to immigration policy, where it would advocate a further toughening of asylum laws. Immediate pressure on Sweden's currency notwithstanding, the business environment and economic policy will experience a high degree of continuity, regardless of which coalition comes into power.