The Swedish government has announced it is drawing on Danish experiences to improve cancer care by introducing standardised cancer care pathways much like the Danish "pakkeforløb" ("pathways"), which set out to bring together a variety of stakeholders whilst keeping the patient at the centre of care. But how well did the pakkeforløb fare in Denmark? Did they deliver what they were set out to achieve when they were first launched in 2007? And will a replication of standardised cancer care pathways in Sweden alone lead to a reduction in cancer care inequalities in the country?

The Danish pakkeforløb are at the forefront of international cancer care, with a uniquely designed structure that brings together clinicians, administrators, regulators, local and national government representatives. And the first annual progress report, published by the Statens Serum Institut (SSI) in May 2014, indicated that 85.7 % of all new cancer cases in Denmark in 2013 were registered via the standardised cancer care pathways. This report also highlights that there are still some discrepancies between regions, as the Region of Midtjylland identified 88.7% of new cancer cases via the pathways, while this figure stood at 83.8%, in the capital Region of Hovedstaden. The programme has nonetheless been considered highly successful, with 82% of patients receiving treatment within the set target timeframes in the fourth quarter of 2014, and with only marginal regional differences.

In terms of delivering what the pakkeforløb were set out to achieve, i.e., to improve patient prognosis and the quality of life by reducing waiting times, it is clear from the above figures that the initiative was successfully rolled out and adopted across Denmark's healthcare sector. However, despite the success of the programme, Denmark remains tainted by comparatively high mortality rates compared to other advanced markets and still has a long way to go to reduce its cancer death rates to levels such as those observed in Sweden, for instance. 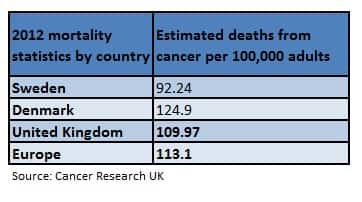 So the question remains; will the replication of standardised cancer care pathways in Sweden reduce cancer care inequalities in the country?It is important to keep in mind that treatment-waiting times for cancer patients in Sweden varies by up to three months depending on the County council of residence. The Swedish government embarked on the initiative at the start of 2015, aiming to reduce regional inequalities, improve patient experiences and shorten the waiting times for cancer patients. Sweden will pledge a total of SEK2 billion (USD240 million) into five initial priority oncology areas, namely; acute myeloid leukemia (AML); head and neck cancer; oesophageal and gastric cancer; prostate cancer; and cancer of the bladder and urinary tract, over the duration of the government´s mandate, which lapses in 2018.

While the overall aim of introducing standardised cancer care pathways is to reduce regional inequalities by minimising the time taken from the stage of diagnosis to treatment, this initiative only represents one aspect of cancer care inequalities. There are still some crucial areas left unaddressed with this initiative in Sweden. Cancer drug postcode lottery is yet another crucial aspect of cancer care inequalities that should arguably be addressed, in addition to curbing regional disparities in waiting times. In fact, data from 2013 show there are also great regional variations in the spend of cancer drugs per capita; ranging from SEK275 per capita to SEK464 per capita.

Sweden is however hard at work at overcoming regional drug inequalities by introducing joint procurement structures as part of a wider pharmaceutical reform aimed at tightening relations between the 20 or so Councils across the country. This move is not a novel one, but one that has been pre-dated in the Danish hospital sector whereby the national drug procurement agency, Amgros, is responsible for tendering of hospital pharmaceuticals on behalf of the five Danish regions. Amgros thus ensures pharmaceutical spend across all regions are kept at (low) levels, realising annual savings of up to DKK1.6 billion (USD230 million). Joint tendering models are in general likely to promote flexible drug pricing contracts and price negotiations.but it is stillessential that financing and access of cancer drugs across Sweden is part of the wider cancer care inequality debate.
Sweden is likely to benefit from Denmark´s experiences when it comes to standardised cancer care pathways. Meanwhile, Denmark is at the same time itself still battling to reduce its longstanding high mortality rates from cancer. It is not likely that this initiative alone will adequately address all areas of cancer care inequalities in Sweden, although it might very well contribute to the overall reduction of such. In order to address these issues in a more all-inclusive manner, the wider cancer inequality debate in the Nordic countries as well as elsewhere, should be careful not to neglect regional variations of drug provision, ensuring market access and drug financing is also at heart of the agenda.