The UK economy started the third quarter on a strong footing as business continued to reopen doors after the COVID-19 lockdown. A surge in business activity of a scale not seen for five years indicated by the flash PMI surveys in July will fuel expectations that the economy will return to growth in the third quarter after having suffered the sharpest contraction in modern history during the second quarter.

However, even with the July rebound there's a long way to go before the output lost to the pandemic is regained and, while businesses grew more optimistic about the year ahead, a V-shaped recovery is by no means assured.

The flash IHS Markit/CIPS composite PMI, based on around 80% of normal replies received from the monthly surveys, jumped from 47.7 in June to 57.1 in July, smashing through consensus expectations and heralding the first return to growth since February. The expansion was the largest recorded since June 2015. 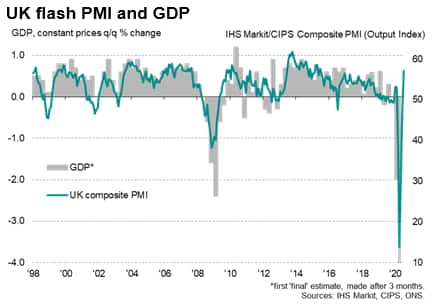 Since April, the PMI has been buoyed by many businesses ramping up activity or reopening after lockdown closures, but July represented the first month that companies reported an overall improvement in the output trend.

Manufacturers led the expansion, reporting a second month of rising production, with the rate of growth spiking to the highest since November 2017. Service sector business activity meanwhile rose for the first time since February, growing at the sharpest rate since July 2015. 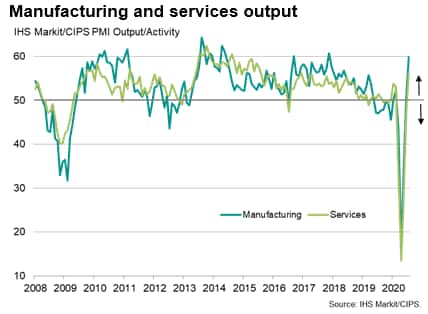 The manufacturing upturn was broad-based with the exception of electrical and electronic goods producers, which lagged behind. In Services, the best performances were seen in financial services and IT & computing services, with solid rebounds also seen in business services and transport. Consumer services, especially in leisure-focused sectors, remained in decline.

Sustainability of upturn not guaranteed

Company responses indicated that the strong upturn in July in part reflected the reopening of business after the lockdown, with customers also reviving their businesses and consumers stepping up spending, leading to the first increase in new business since February. However, the gain in new business was markedly weaker than the increase in output seen during the month, resulting in a further steep fall in backlogs of work.

Job losses on the rise again

The ongoing decline in backlogs of work (albeit the weakest since February) indicates the persistence of spare capacity relative to demand. Hence July saw yet another sharp cut to employment levels as increasing numbers of companies scaled back their operations, notably in consumer-facing sectors. Factory headcount losses continued to moderate. Although easing on the recent highs seen at the height of the lockdown, the overall rate of job culling remained only slightly weaker than the peaks seen during the height of the global financial crisis. 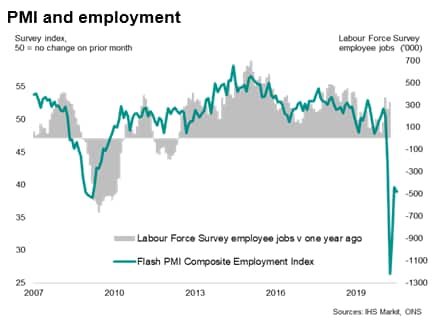 Encouragingly, business sentiment about the coming year improved for a fourth successive month, rising in July to the highest since February. Brighter prospects were recorded across both manufacturing and services (although in many cases merely reflecting the hope that things cannot get any worse than current conditions). A further planned easing of COVID-19 containment measures in coming months should also help stimulate more growth.

The concern is that many households are likely to remain cautious towards spending with the job market deteriorating. With the furlough scheme ending in October, there is clearly a potential for employment to fall further unless demand picks up.

Furthermore, not only do many consumer-facing businesses remain especially hard-hit by the pandemic amid ongoing social distancing, we remain very concerned about the extent to which the recovery could be smothered by a lack of effective post-Brexit trade deals. UK exports of goods and services continued to fall at a marked rate in July, and trading uncertainties will inevitably hamper overseas sales further.

July's PMI therefore represents a step in the right direction, but this is only the very start of the climb out of the valley caused by the downturn, with a mountain still to climb.