As new cases of the Omicron variant of the coronavirus disease (COVID-19) virus continues to climb worldwide, causing staff shortages in all sectors, there is a threat of renewed mobility restrictions and further disruption to global supply chains. Although it is likely that new restrictions will be less stringent compared with during the peaks of the pandemic in 2020 and 2021 and that they will continue to be loosened overall, IHS Markit's view is that logistics constraints, particularly on sea cargo, will persist throughout 2022.

The main disruption for Latin American traders comes from increased shipping costs and long delays to products arriving at their destinations, considering that the US and China, which are significantly affected by bottlenecks at ports, are their main export markets. Exports to those countries have been delayed by up to sixfold, with goods that previously took weeks to arrive now taking more than six months, as calculated by industry sources. Export delays are likely to continue throughout 2022, as some Chinese ports remain closed because of COVID-19 and lorries and warehouses suffer from staff shortages in the US. 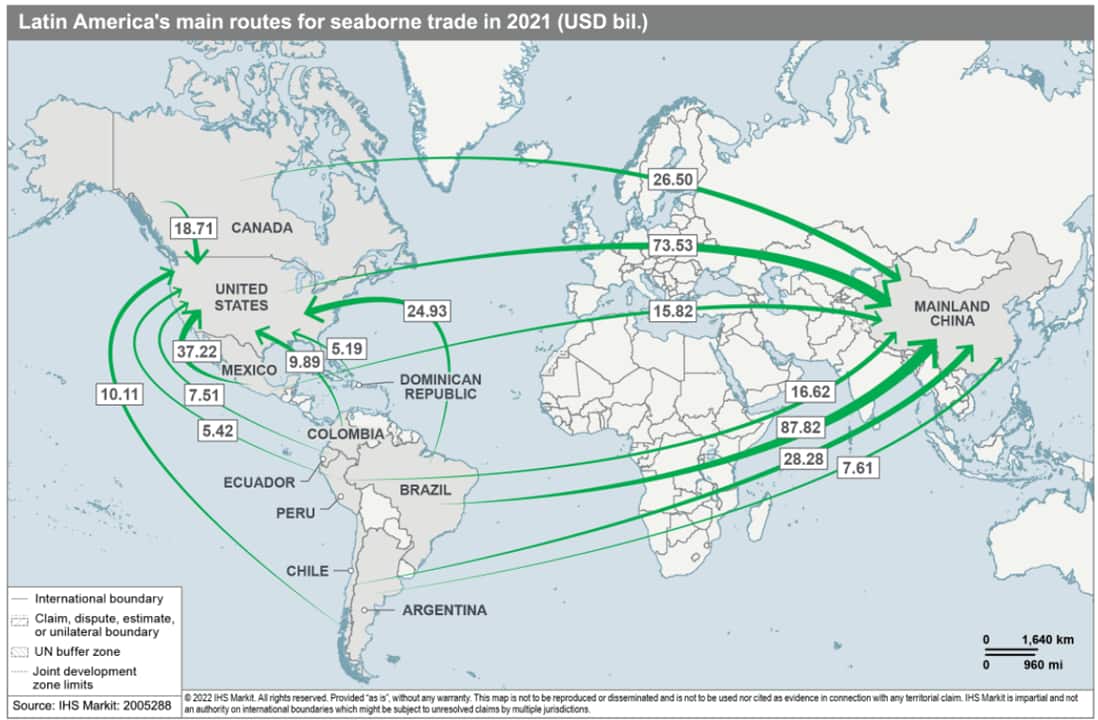 Latin American exporters of fruit, meat, and other perishables were not critically affected by delays until mid-2021, with perishable goods shipped through direct routes that often avoid bottlenecks. However, as refrigerated containers (reefers) are now being used for all merchandise to offset the shortage of regular containers, reefer scarcity is likely throughout 2022 and into 2023. This is having a clear impact on exporters, with one Chilean fruit exporter reporting to IHS Markit that a shipment that previously took 14 days to arrive in Miami now takes at least 34 days, with consequent risks of produce rotting or exporters being unable to honor their contracts. Companies are also likely to cut production if they are unable to export or if the high price of freight makes the business uncompetitive, exacerbating supply shortages. In Brazil, the sector is risking not being able to get fertilizers from China in time for the February-May harvest, although they are likely to resort to other importers in order to avoid affecting the harvest. In Argentina, strikes by port workers and lorry drivers over salaries and working conditions are likely to further disrupt the supply chains servicing agribusiness, the country's main export sector. Industrial action is very probable in the one-year outlook as unions step up salary demands amid high inflation. 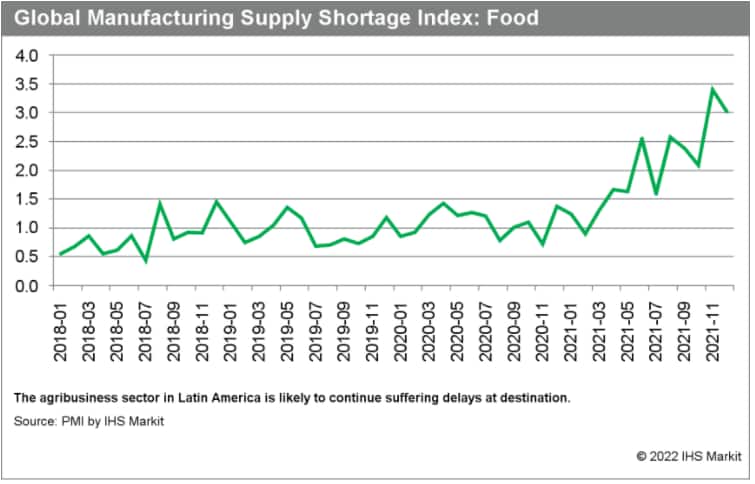 Delays on imports of inputs and shortages of raw materials will continue to affect Latin America's manufacturing output in the one-year outlook. According to IHS Markit's purchasing managers' index (PMI) surveys, Mexican manufacturers reported in December 2021 that ongoing supply-side issues have translated into severe delays in delivery times and the third-fastest increase in purchasing prices on record. The PMI notes that both Mexico's manufacturing output and new export orders, which show international demand for domestic goods, declined again in December, continuing a trend since March 2020. In Brazil, new orders declined in December 2021, but at a slower rate than in November "amid reports of subdued domestic demand for goods, sufficient stocks among clients and challenging conditions in the automotive segment", but new export orders started to increase. Mexican manufacturers face the additional challenge of unrest by unions, farmers, and other pressure groups, consisting of blockades of the railway line that connects the major port of Lázaro Cárdenas in Michoacán state to the manufacturing states of Guanajuato, Querétaro, and San Luis Potosí.

Carmakers in Argentina, Brazil, and Mexico are likely to face continuing delays in accessing imported inputs, mainly semiconductors produced in China because of shortages, until at least the end of 2022. In Mexico, the enactment of new legislation providing workers with enhanced unionization rights, including transparent elections of their representatives, is raising the likelihood of worker unrest around potentially disputed union elections. In Brazil, automotive firms have stopped assembly lines for weeks, with further slowdowns in car production likely in the one-year outlook, including delays in delivery to final consumers, and higher out-the-door prices. Prolonged slowdowns leading to furloughs or dismissals and high inflation eroding salaries are likely to prompt industrial unrest among metal workers.

Anti-mining protests by Peruvian local communities are likely to cause supply chain disruptions via road and project site blockades through 2022, particularly along the Apurímac-Cusco-Arequipa motorway (the southern mining corridor), from where 63% of the country's copper exports are transported. In Chile, which produces almost 30% of global copper output, there is a risk of disruption to mining operations because of strikes by mining workers demanding higher salaries and bonuses in the context of high copper prices in 2022 and the renegotiation of approximately 30 collective contracts. However, it is likely to be averted by early collective negotiations, with companies also implementing effective mitigating plans in case of stoppages and having enough stock to meet export commitments.