A recent newsworthy U.S. import shipment provides a unique opportunity to visualize the end-to-end supply chain through the lens of multiple maritime and trade solutions.

About three months ago, a mainstream news outlet reported on an expected U.S. import shipment of corn from Turkey, which at that time was pending discharge at a North Carolina port. Contributing to the newsworthiness of that particular shipment was not only the historic rarity of U.S. imports of corn from Turkey, but also the speculated organic variety that would prompt the U.S. to import from such a niche producer, considering the U.S. prominence as one of the largest corn exporters in the world. Due to the unique nature of this cargo (as likely the only shipment of its kind for the month), we can pinpoint milestones in the supply chain for which this individual shipment is captured in various maritime and trade solutions. Such insights are often applicable to other commodities and geographies of interest.

It is said that hindsight is 20/20, and that sentiment often rings true for supply chain. A variety of solutions can be deployed to scrutinize and provide transparency to the global supply chain. As time passes, transactions are represented in different ways by increasingly more capture methods such as vessel tracking tools, open source tools, as well as statistical and transactional databases.

Each of these tools are characterized by their own respective advantages and disadvantages. For example, some solutions reveal insights in a timelier fashion than others. Other tools may take a while longer to reveal additional details and cover only an abbreviated set of geographies; but when/where available, they may reveal the most sought-after characteristics of the transactions: supplier and buyer company names, logistics companies like ocean carriers and intermediaries, container sizes and aggregate trade volumes, values and unit prices. Depending on the needs of the user, a unique mix of these capabilities are often cultivated to strengthen supply chain intelligence from a spectrum of leading to lagging indicators.

What follows is a 10-week chronological timeline for this individual shipment based on the intelligence available from specific solutions from IHS Markit and even open source data as the complete picture of the shipment is brought into focus.

Intelligence: The CS CELESTE (IMO 9670418), a Marshall Islands-flagged bulk carrier vessel with cargo capacity of 38,737 deadweight tons (DWT), departs dry cargo berth number 3 of the Turkish port of Giresun fully laden. During the 181 hours at berth, her draught increased from 7.0 to 10.1 (maximum vessel draught is 10.6). However, it is not clear at this point what specific cargo the vessel is carrying outside of some type of bulk cargo owing to its known ship type, and only an approximate volume is known by comparing relative draught to maximum DWT capacity.

Intelligence: About 10 days after departing Turkey, the crew of the CS CELESTE declares her destination as the port of Wilmington, DE, USA, via its onboard Automatic Identification System (AIS) just after exiting the Strait of Gibraltar.

Intelligence: In addition to declaring its destination via AIS, the CS CELESTE presumably also registers her upcoming port call with the North Carolina State Ports Authority so that the incoming shipment appears on its open source sailing schedule along with an ETA and a brief commodity description of something like "organic cracked corn" (although now archived). The March 19 article referenced above referenced this sailing schedule as its source. Note that this is the earliest description of the specific cargo on board, however brief.

Intelligence: The CS CELESTE sails into berth number 5 in port Wilmington, DE, USA, as announced, where she discharges a portion of its cargo as evidenced by her draught changes during the 85 hours in port. She then sails on March 22, 2021.

Intelligence: Data shows the crew of the CS CELESTE declares her next destination via AIS message as the port of Morehead City, NC, USA, just down the coast from Wilmington. 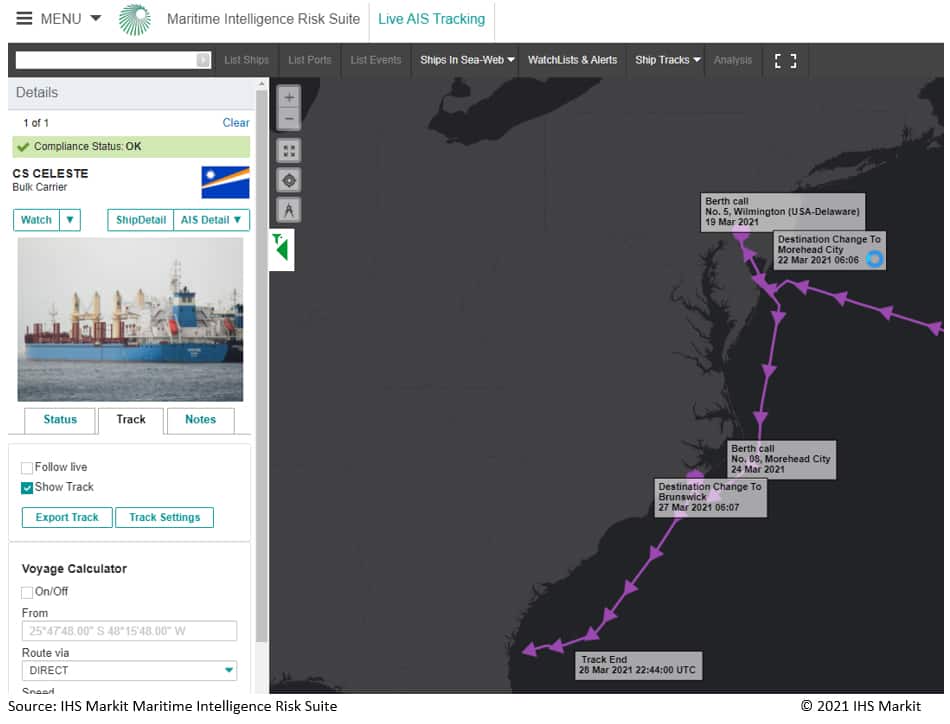 Intelligence: The CS CELESTE sails into berth number 8 in the port of Morehead City, NC, USA, as announced, where she discharges her remaining cargo during the 72 hours in port and draught returns to 7.0, fully ballast.

After this, the CS CELESTE proceeds to sail further southward towards the port of Brunswick, USA, to take on an additional load of cargo before continuing dutifully along its subsequent sailing schedule.

Intelligence: New Turkey February 2021 export data is published from The State Institute of Statistics, the official source for Turkey import/export statistics, including concepts like value, quantity and unit price for all physical goods and all trading partners. Turkey is one of 102 reporters representing approximately 96% of total international trade globally. The commodities are categorized according to the Harmonized System (HS), where this particular CS CELESTE shipment (using HS code 110423) is included as part of Turkey's overall monthly reported exports to the United States for this commodity in February 2021. This official reporting milestone is nearly six weeks after the vessel originally departed Turkey as an export on February 21, 2021, but still about five weeks before the U.S. will announce March 2021 U.S. imports on May 4 as detailed later in this article.

Intelligence: Coincidentally, the shipment appears in the IHS Markit PIERS US bill of lading (BOL) transactional database on the same day that new February 2021 Turkey statistical trade data is released, 13 days after the first Wilmington, DE, USA, port call and eight days after the second Morehead, NC, USA, port call. The U.S. records in particular are available for IHS Markit PIERS clients to query against in the database immediately thereafter, as approximately 60,000 bills of lading are ingested from U.S. Customs daily and published on a 6-day-per-week publishing cadence.

While 13 other international markets have similar bill of lading databases available in the IHS Markit portfolio, these other markets are released in once-monthly all-in releases at various delay intervals after the completion of the month, rather than dynamic daily publishing as is the case with the U.S.

Transactional BOL data in general is particularly detailed, as it reveals data fields such as the full raw commodity description as declared on the bill of lading: 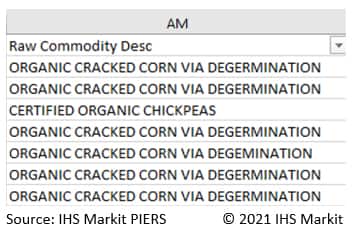 Other data fields reveal the Turkey shipper and U.S. buyer involved with the transaction:

Still other data reflects the dates the respective shipments cleared U.S. Customs as an import as well as the path of the vessel as it sailed from Turkey to the U.S.:

Because the U.S. ports are identified in the above records, we can filter for these two specific ports to see the volumes and estimated values of the commodities imported:

Intelligence: The U.S. has a very formal and explicit statistical data release schedule maintained by the U.S. Census Bureau. These specific U.S. imports occurred on March 19 and March 24 at their respective ports, and the U.S. March 2021 import/export data is not released until about 5 weeks after the completion of the month on May 4, 2021. Unlike Turkey statistical data, which only reports national-level import/export activity, the U.S. source provides extra data fields (EDF) such as ports and transport modes that allow users to view subnational data for increased granularity.

When viewing the U.S. March 2021 import data from Turkey for this corn commodity (and same HS code 110423) through the port lens, we can see that the volumes match up almost exactly with PIERS volumes above, which were available nearly five weeks earlier. Moreover, these volumes are within the maximum DWT capacity for the CS CELESTE alone. Normally, these aggregate monthly volumes would be diluted with other shipments for the same trade partner/port/commodity combination, but because this particular trade combination is so rare, we can see how they align directly with a single vessel discharging at two ports for the same type of cargo.

In summary, supply chain analysts often must contend with trade-offs in the never-ending search for leading indicators of supply, demand, risk, logistics and competitive activity. Early data may be very timely but equally sparse on detail. Interim data may continue to provide some important details as additional data is made available. Official data may help to increasingly fill in the gaps as additional solutions are invoked and updated over time, but also provide less of a competitive edge due to its lagging nature and widespread use by many personas and many industries. The optimal solution mix is often revealed after an honest assessment of existing tools, blind spots and pain points. After all, it is said that a problem well-understood is half-solved.