The impact on global trade caused by the container ship Ever Given becoming lodged across the Suez Canal on 23 March has led to concern in the shipping industry over the potential for similar disruption caused by acts of political violence. As some shipping companies re-route cargo around South Africa's Cape of Good Hope, there have also been questions around piracy risks to these vessels.

Sinai-based jihadist militants most likely do not have the capability to cause significant damage or disable a cargo vessel in the Suez Canal. There has been an active jihadist insurgency in Egypt's Sinai Peninsula since 2014. IHS Markit recorded 140 militant attacks in North Sinai in the last 12 months, but none within 50 km of the Suez Canal. Nevertheless, the Islamic State in Sinai most likely see the Suez Canal as an aspirational target and have probably been further encouraged by the widely reported impact of the Ever Given blockage. The group's capability to conduct attacks against shipping in the canal is probably limited to one-off missile strikes using rocket-propelled grenades (RPGs) or anti-tank guided missiles (ATGMs). These would be very unlikely to cause more than superficial damage to a cargo vessel, let alone to disable a vessel in the canal. Blockage of the canal by a damaged vessel would only become more likely in the event of a suicide attack using an explosives-laden dinghy. Current levels of Egyptian security measures and surveillance along the canal, however, make such an attack very unlikely. 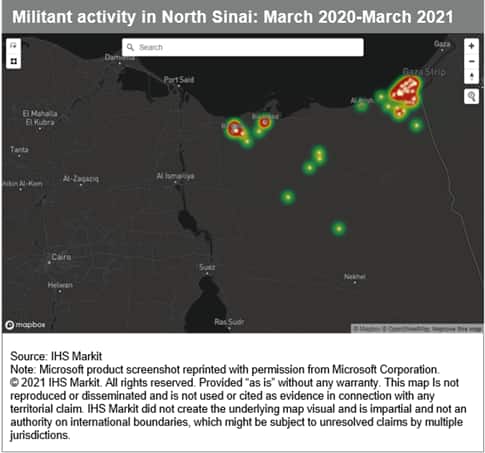 Vessels re-routed around South Africa's Cape of Good Hope are at lower risk from Somalia-based piracy than those using the Suez Canal. Piracy risks off Somalia have reduced significantly in recent years. IHS Markit recorded 12 suspicious approaches by suspected pirates off Somalia in the last 12 months, but no successful attacks. The last successful hijack of a commercially significant vessel was in March 2017. Attacks against larger commercial vessels are usually deterred or aborted due to the presence of onboard armed security, demonstrating that while there remains the intent to conduct acts of piracy, the capability of assailants is insufficient for current security protocol. The majority of attacks target vessels in the Gulf of Aden, en-route to or from the Suez Canal. Vessels that have been rerouted around South Africa to or from Asia would avoid the piracy risk area altogether, while those rerouted to or from the Middle East Gulf would pass Somalia at a much greater distance than they would otherwise have done passing through the Gulf of Aden. 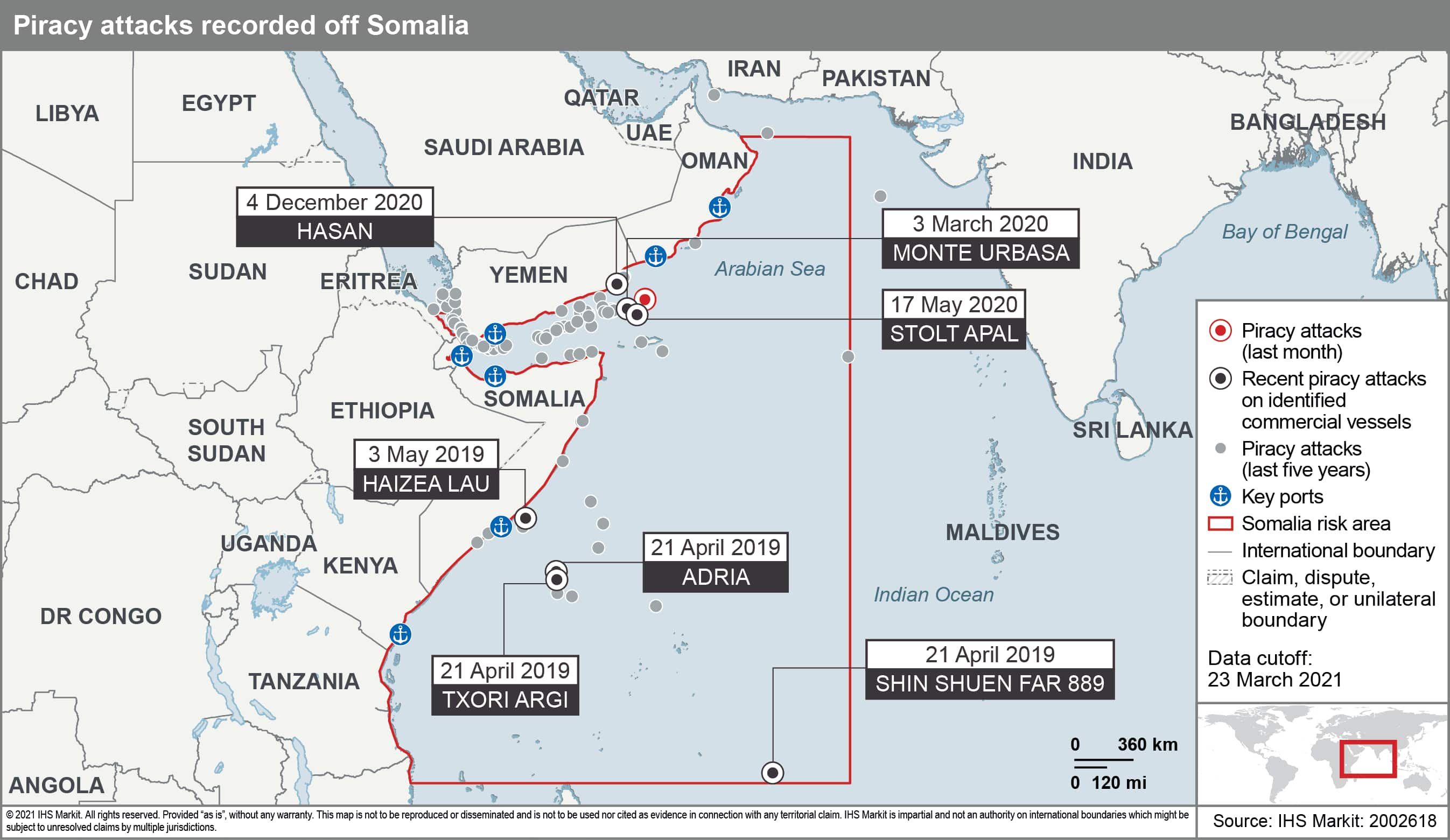 Vessels re-routed around the Cape of Good Hope would not pass through areas affected by piracy in the Gulf of Guinea. Piracy in the Gulf of Guinea is a significant concern for commercial shipping. IHS Markit recorded 29 successful boardings of vessels by pirates in the last 12 months, resulting in 140 crew members being kidnapped for ransom. The vast majority of these attacks, however, are conducted in Nigerian waters and do not extend beyond 300 nautical miles from the Nigerian coast. Vessels traveling between the Cape of Good Hope and Europe or North America bypass the Gulf of Guinea at some distance and are very unlikely to be targeted. 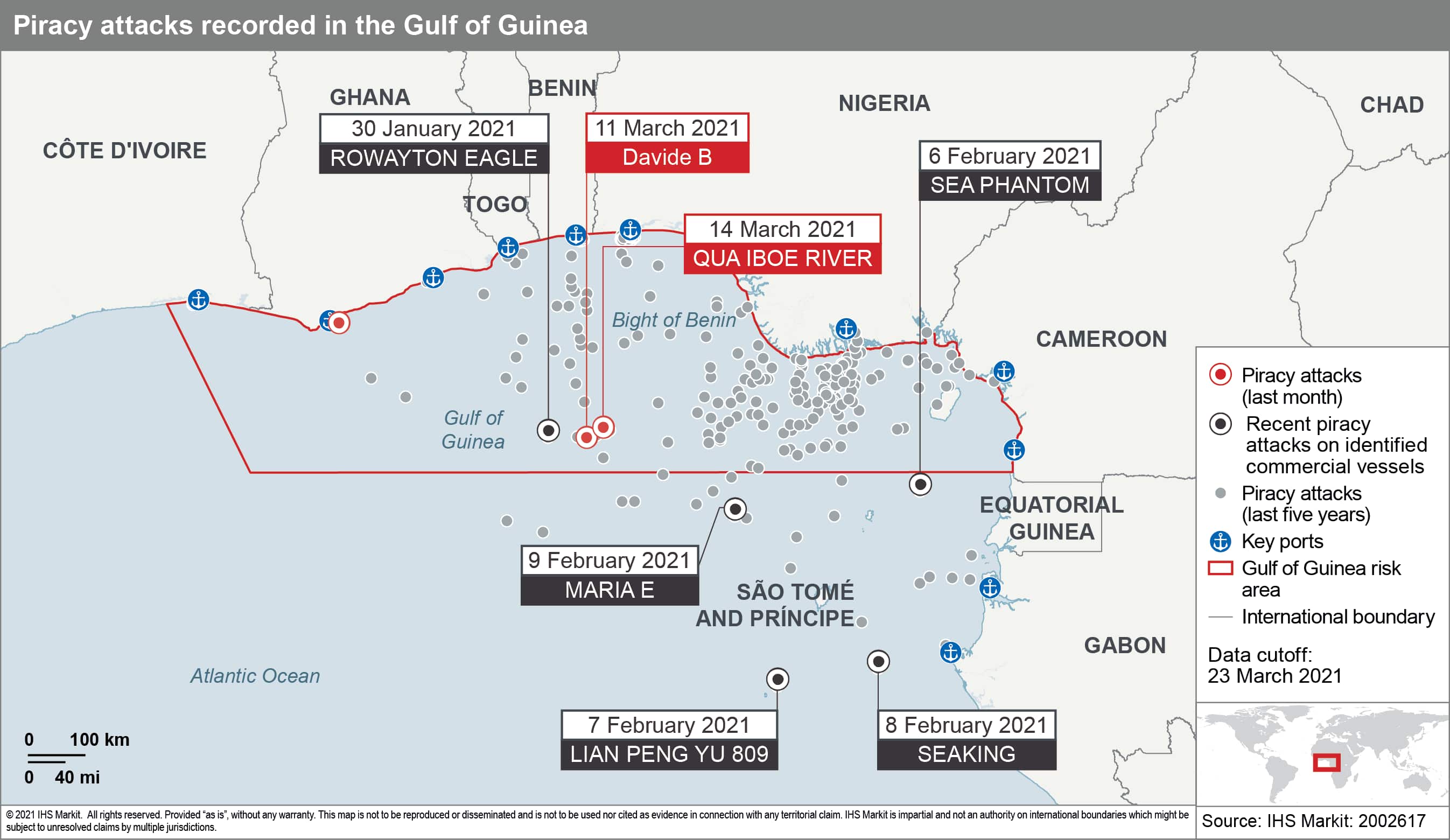