Since our report released on Tuesday, container ship Ever Given is still stuck in the Suez Canal, blocking traffic as of the time of writing (26 March 2021, 04:37 UTC).

It is estimated the Ever Given will take several days to be pulled free, and at 400 metres, the container ship is too long to allow other vessels to pass. The blockage is leading to a rapid build-up of ships both in the Red Sea heading north, and in the Mediterranean heading south.

Congestion is expected to significantly worsen in coming days as it is unlikely that many vessels would detour, considering the expensive deviation cost; For instance, 34 dry bulkers are scheduled for Suez canal transit in the near-future (Red Sea); waiting vessels increased significantly from an average five ships to 16 ships daily according to Commodities at Sea.

The Suez Canal tide calendar indicates the next few days will be critical to refloat the vessel with high tide expected during the full moon period. If the refloating operation fails during this period, the delays for shipping traffic will likely get even worse since high tide will return only in another two weeks.

If it continues, freight rates would become stronger again owing to immediate replacement demand for the delayed cargo and ships. We have already observed sentiment of the freight market turning positive over the last few days and assessments for Forward Freight Agreement (FFA) increased again since the accident happened.

Also, if the blockage continues, vessels that have not passed deviation points may decide to detour. As of writing, we observed two LNG tankers and three container ships, including the 20,000 TEU Ever Greet operated by Evergreen — which also operates Ever Given — have diverted. 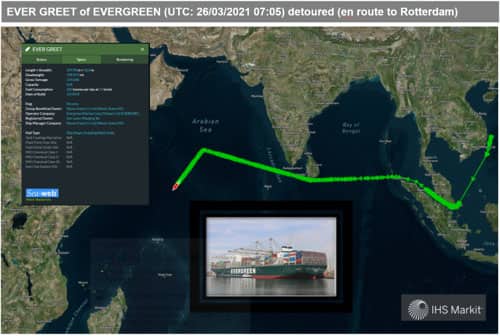 For the wider shipping industry perspective, the Suez Canal, a maritime highway is critical for the global seaborne trade flows including finished goods, bulk commodities and oil and refined products.

We believe container trade flows to be worst impacted, further straining Asia-Europe supply chains. Even a two day delay would further add to the supply chain disruption slowing the delivery of cargo to businesses across the UK and Europe. An option for shipping lines is to re-route vessels around Africa and the Cape of Good Hope, but that will add more than 3,000 nautical miles and another week to the transit time from Asia to Europe. Ships will also have to speed up to maintain their weekly schedules, and an increase of two knots over five days of extra steaming will burn an additional 1,000 tons of fuel, or 500,000 US dollars.

Egypt also controls two major oil transit points, the Suez Canal and the SUMED pipeline, that brings oil from the Red Sea to the Mediterranean. It's a crucial link for oil and gas headed to Europe, Asia and the United States. Extended delay would accentuate impact on oil and refined product flows.

Chart 2. Suez Canal traffic by ship type; Based on annual capacity of ship transiting Suez Canal in 2020, container cargo movements would be affected most, followed by tankers and bulkers.