Nuclear as a net zero accelerator in the UAE

The successful commercialization on 24 March 2022 of the Emirates Nuclear Energy Corporation's (ENEC's) second reactor raises online capacity to 2.8 GW and supports expectations that all four reactors will be on-line by 2024, when they should account for over 20% of the integrated Abu Dhabi and Northern Emirates generation capacity and close to 40% of electricity generated.

Successful operation of the nuclear facility is a cornerstone of Abu Dhabi's clean energy strategy and is allowing Abu Dhabi's power utility EWEC (which is also responsible for Northern Emirates supply within the UAE) to substantially reduce its use of gas generation, and in particular to back-out low efficiency/older generation technology in its system.

S&P Global has applied its models of the UAE power demand and supply systems to assess the impact of the nuclear facility in terms of supporting the nation's decarbonization objectives and freeing up gas from use in power generation to support the national goals for self-sufficiency and potential further export development. 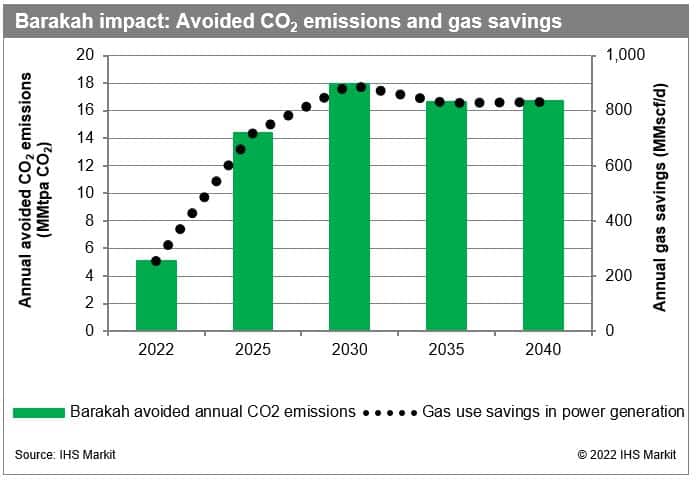 Our analysis indicates that the nuclear facility should support the long-term elimination of up to 18 million tonnes pa of CO2 compared to what might have been the case without its successful operation. In 2030 this should account for 25% of the targeted total UAE reduction planned within its latest NDC submission.

In addition, we estimate the gas savings from full four reactor operation, based on backing out operation of the least efficient gas-fired generation plants in the EWEC system, could be from 900 to 1200 million cubic feet per day (or 155 to 205 thousand barrels oil equivalent per day) [1], although these levels could be somewhat reduced longer term with significant step ups in renewables penetration and/or investment in more efficient gas generation. This gas demand impact will represent a major contribution towards ADNOC's strategy to support the UAE to be self-sufficient in gas by 2030 and potentially to be a net exporter.

Learn more about our research in gas, power, and climate solutions.

[1] The high-end of the range reflects a non-optimal power dispatch scenario where Barakah full-load generation would have been replaced equally by each operating gas-fired power plant in the EWEC grid.

Raul Timponi is an Associate Director on the Europe, Middle East, and Africa Energy Team, specializing in global power markets.

Silvia Macri is a Principal Research Manager, responsible for renewable and power market analysis in Africa and the Middle East.

Andy Barrett is a Senior Advisor with the Climate and Sustainability Consulting Team with an extensive background at the highest levels of the international energy business.