Sub-Saharan Africa followed the rest of the world out of the worst of the coronavirus disease 2019 (COVID-19) pandemic in the third quarter of the year, leading to a robust recovery in business output and customer demand. However, national data signalled varied recoveries across the region, particularly as some countries were slower to emerge from lockdown measures. Furthermore, jobs and business sentiment were subdued, reflecting reports of permanent business closures and worries over a long-term hit to the economy.

The Sub-Saharan Africa Output Index (a weighted average of the seven countries' PMI output indices) rose to an eight-month high of 53.7 in September, and signalled a solid rise in business activity across the region. The reading marks a considerable turnaround from 23.6 in April at the height of the COVID-19 pandemic. Surveyed businesses highlighted that the upturn was helped by softer restrictions on businesses, people and travel.

Growth momentum has been broadly similar to the trend for emerging markets, with the two series having tracked each other closely since August. However, Sub-Saharan countries recorded a much stronger downturn earlier in the year, suggesting that the region has further ground to make up for. PMI data suggest a rise in GDP across the region on a quarterly basis, but one that is highly unlikely to offset the considerable fall expected in the second quarter. 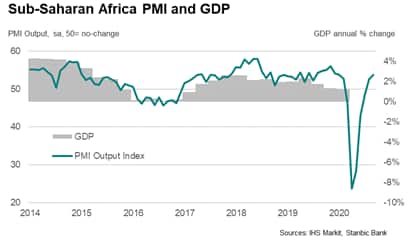 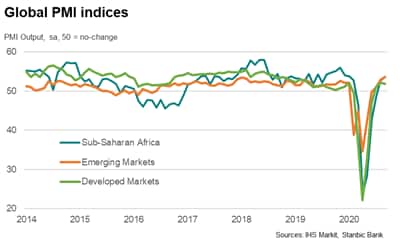 While the recovery has been solid at the regional level, there were variations among the economies, with four of the seven monitored countries seeing a rise in output during the third quarter while the remaining three reported a decline. Kenya saw the strongest growth, linked to the lifting of city travel bans and an increase in cash flow. Nigeria and Uganda also saw solid rises in activity as consumer demand improved. Ghana meanwhile registered the slowest expansion but also suffered the weakest decline in the second quarter.

Conversely, Zambia, Mozambique and South Africa all recorded further decreases in activity during the third quarter, though ones that were far softer than in the previous period. Panellists noted that a lack of money circulation and currency weakness restricted consumer spending in Zambia. Meanwhile, downturns in Mozambique and South Africa can be partly linked to the slower removal of lockdown restrictions, with the latter nation notably re-implementing some measures in July. 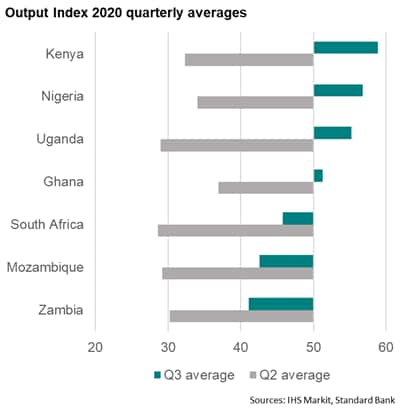 Employment still widely falling, but at a slower rate

Rising inflows of new business were seen across the Sub-Saharan region in the past two months. However, this has had a limited impact on capacity so far, as reflected by a further sharp reduction in backlogs. Amid reports of rising costs, firms subsequently looked to cut expenses by reducing employment. On a brighter note though, the rate of job shedding eased markedly since the second quarter, with all seven nations seeing a rise in the employment index.

Job cuts were largely centred on South Africa and Zambia, where firms trimmed their workforce numbers in response to reduced output requirements. Meanwhile, Ghana was the sole country to register a rise in workforce sizes on average during the third quarter, but even here the increase was only fractional. The remaining four nations all saw marginal declines in employment during the third quarter, though for Nigeria and Uganda, hiring was stepped up from August onwards. 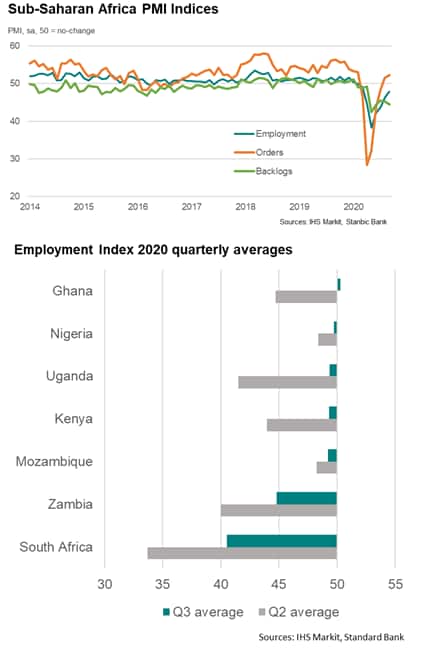 The recovery in activity across the region has yet to significantly bolster business confidence, with sentiment regarding future growth in Sub-Saharan Africa remaining much weaker than the historical trend in the third quarter. According to panellists, the rise in output has done little to abate concerns about the long-term financial impact of the pandemic. Strikingly, there were already reports of permanent closures.

While COVID-19 cases have fallen across most of the region, giving hope of a further easing of restrictions and a stronger economic recovery, the threat of a resurgence lingers, illustrated by the growing 'second wave' in Europe that could easily lead to higher cases in Sub-Saharan Africa as time progresses.

In the event of a second spike, the impacts on activity, employment and sentiment, as signalled by the PMI data, show there is a definite risk/reward trade-off from these COVID-19 containment measures. With this knowledge and experience, government policy is likely to be more targeted in future waves, as both public health and economic health will have to be strongly considered. 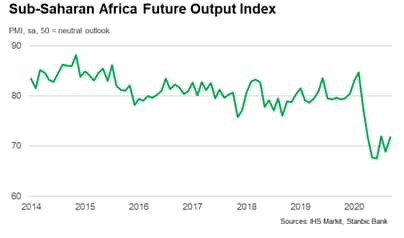