The first half of 2019 looks to have been a disappointing one in terms of global growth. Deteriorating sentiment among industrial sectors, as well as subdued service sector activity, means that global economic growth has slowed to a three-year low. However, encouraging PMI data for Sub-Saharan Africa exemplifies the region as one that may buck this slowdown with both output and demand continuing on solid paths in recent months. Moreover, a new continental trade agreement gives hope for even stronger business activity growth in the future.

PMI survey data compiled by IHS Markit show that Sub-Saharan business activity growth was consistently robust in the first half of 2019. Responses from businesses in seven countries in the region indicated that activity has risen at a solid pace, albeit slower than on average last year. 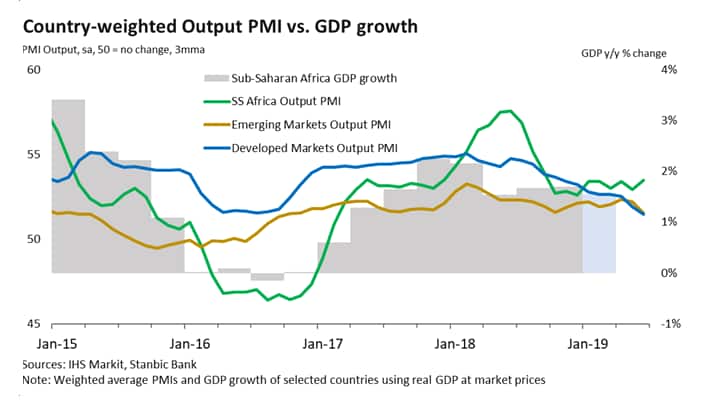 More importantly, the strength of the region compares with a disappointing set of survey results for developed markets, which recorded the worst quarter for output growth since 2013 in the three months to June. Similarly, emerging markets in June saw the weakest upturn in activity for three years. Altogether this suggests that official data for the first half of the year will be underwhelming.

One possible reason for the divergence is that African countries have been less targeted by import tariffs than key economic regions such as the US, EU and China, which have dampened global demand in 2019 so far. The African nations are also less reliant on international trade and focused more on domestic consumption, which has generally been solid for the region. 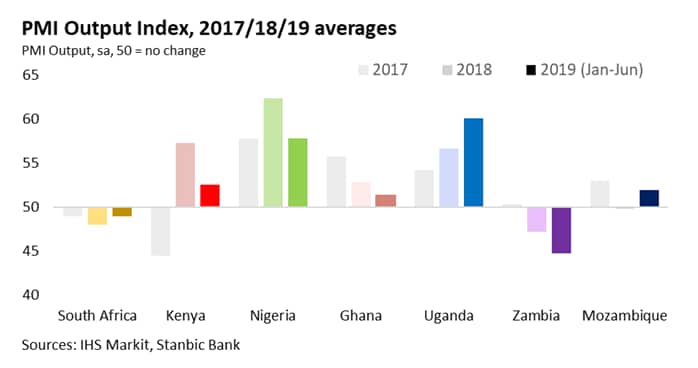 Looking at individual country PMIs, 2019 survey data shows growth accelerating at two of the monitored countries: Mozambique and Uganda. Nigeria has meanwhile maintained a solid growth trend, albeit one that has been softer than recorded on average in 2018. Conversely, South Africa, the most industrialised nation of the group, have seen output decline slightly due to frequent power cuts (read more here), while Zambia has recorded a steeper downturn.

The second quarter of 2019 saw economic growth in Uganda accelerate. Moreover, June itself saw the Stanbic Bank PMI reach its highest level since the survey began in June 2016. The data suggest that the rate of expansion in GDP will pick up again in Q2 following a softening at the start of the year. Stanbic Bank economist, Jibran Qureishi added to the optimistic picture, saying, "The expansionary fiscal policy outlined in the FY2019/20 budget should continue to support activity, especially if the absorption of the development budget improves". 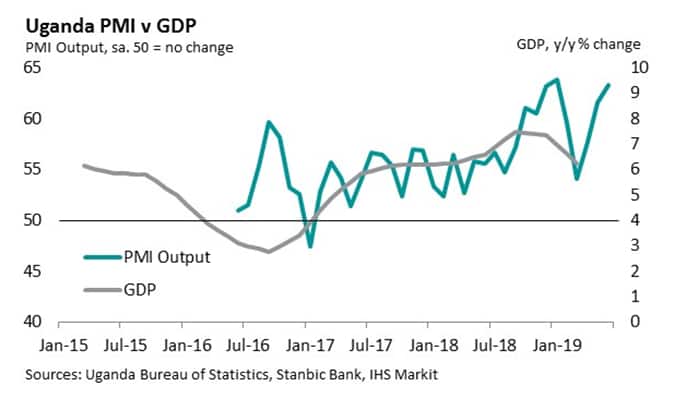 Despite an overall positive picture for the region, there are some headwinds lingering. After a strong performance in 2018 for the Kenyan private sector economy, business conditions have been more subdued in the year-to-date in 2019. Often, firms in the survey have seen activity limited by cash flow problems, partly due to a credit freeze on small- and medium-sized enterprises. As a result, April PMI data even signalled a marginal contraction in output, while new order growth also stalled.

However, June's survey saw mentions of cash flow issues decrease slightly in Kenya, while accelerating sales growth and improved agricultural conditions led to a sharp uplift in output. In addition, businesses raised their optimism for future output to a survey high, with panellists mentioning expansion plans and the latest government budget speech as underpinning hopes. If such optimism and current demand levels can be sustained, the second half of the year could see output growth return to 2018 standards. 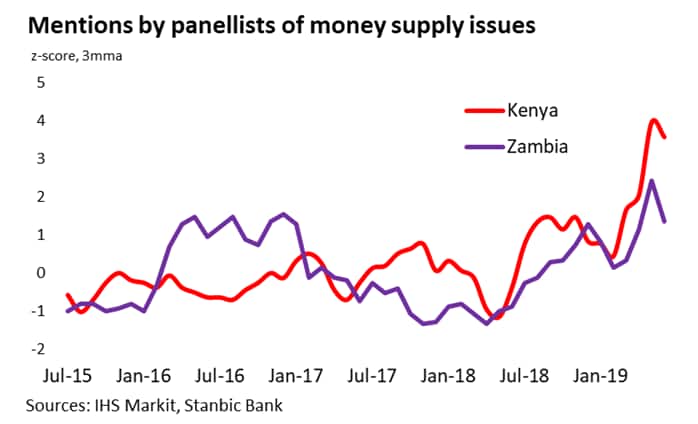 Cash flow issues have also been prevalent in Zambia, according to survey respondents, with a lack of money at companies and their customers reportedly hampering demand. At the same time, currency weakness has acted to push up inflationary pressures. The output prices element of the Stanbic Bank PMI for Zambia survey hit a 43-month high in June, with official consumer prices data likewise pointing to accelerating inflation. 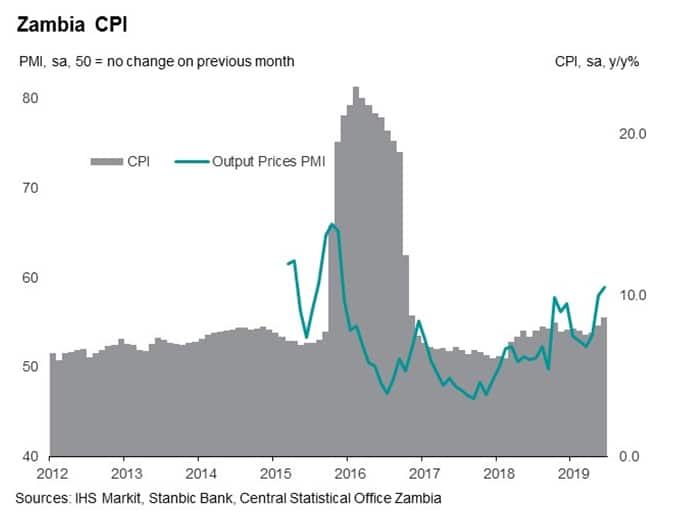 The headline Zambian PMI meanwhile hit a seven-month low in May, and although picking up in June, continued to signal challenging business conditions.

On Sunday 7th July, Nigeria became the latest signatory to the Africa Continental Free Trade Area (AfCTA), in effect giving the green light as the region's largest economy to the initiative to open Africa's borders. The agreement, which is due to come into action next year, offers a lot of potential for businesses. Only 17% of Africa's trade is intraregional, compared to 59% for Asia and 69% for Europe. This could be as much due to poor infrastructure as it is to better trade prospects with the likes of the US and China, although a clear date for the removal of barriers would likely lead to further investment to address these limitations.

More importantly, this represents a clear difference in direction for Africa. As the dominant economies of the world target protectionist measures, African nations are building links and increasing trade with each other, a strategy that can largely benefit resource-rich Sub-Saharan nations. Naturally, businesses are becoming progressively optimistic, with the Future Activity Index for Sub-Saharan Africa reaching a near three-year high in June. 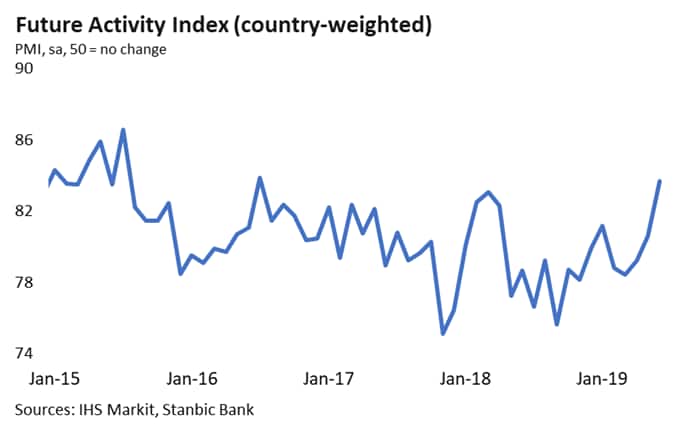 While some countries in Sub-Saharan Africa have economic issues, they are generally local and contained, whereas the apparent global slowdown seems to have been bypassed so far. If this continues, and preparations for AfCTA remain on-track, the area could enjoy a solid rate of growth in 2019 and beyond.