Subnational economic spill over effects after Russia’s invasion in Ukraine

Russia's invasion of Ukraine has caused several spill over effects, which for European economies are having an uneven impact at both the country and the subnational level. Key spill over effects are an increase in oil, gas, and electricity prices; a further boost to consumer price inflation; increased uncertainty and financial stress hindering business investment since the coronavirus disease 2019 (COVID-19) pandemic, and the gradual withdrawal of monetary policy stimulus by the European Central Bank.

Importantly, these spill over effects will have different implications for growth rates depending on the regional distribution of economic sectors far outside of Russia and Ukraine. Notably, the growth trajectory of certain economic sectors is diverging because of disruption to the supply and prices of construction and manufacturing inputs like lumber, steel, and electronic components, while an increase in migration outflows is impacting the availability of the labor force.

Due in part to significant downward revisions to the value added provided by the construction and manufacturing sectors, the largest contractions to nominal GDP growth according to our April 2022 forecast revisions are in Czechia, Italy, and Poland, where annual GDP growth has been revised down by over 4%. By contrast, improvements in agriculture and mining suggest that Turkey is now projected to experience a less severe economic contraction, with annual nominal GDP growth being revised upwards from -16.8% to -13.1%.

Regions specialized in sectors that have been adversely impacted by Russia's invasion of Ukraine are set to face worse economic growth outlooks than what is implied by the country-level trend. While spill over effects in some cities such as Berlin or Bratislava were weaker than the country level effects, other cities were hit harder. For instance, automotive manufacturing hubs in Germany, like Ingolstadt, Munich, and Stuttgart, all saw larger downward revisions in their economic growth outlook than the national average.

Negative spill over effects are also pronounced in cities that are exposed to the real estate and construction industries, which experienced a large decline due to labour shortages, supply chain disruptions, and rising consumer price inflation due to war. By contrast, regions based in rural areas saw that the negative spill over effects were cushioned by improvements in the agricultural and mining industries. 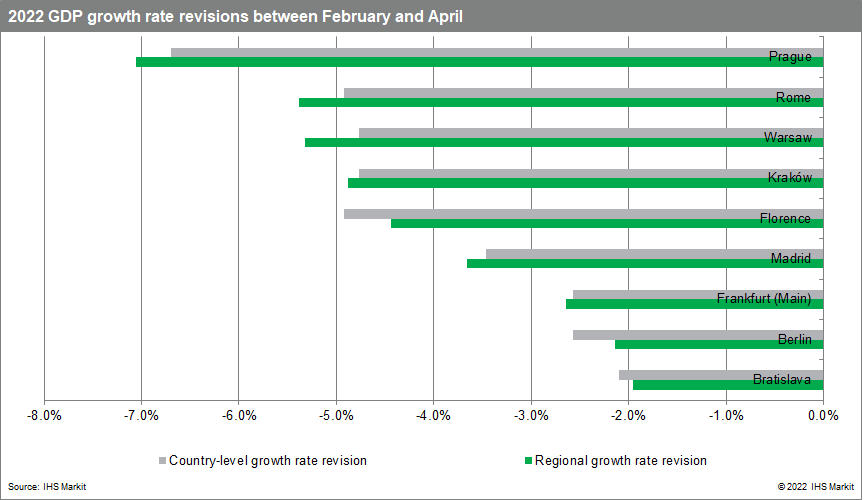 Poland is one of the countries that was hardest hit by Russia's invasion of Ukraine. The main transmission mechanisms are rising energy and food prices due to supply chain bottlenecks, increased fiscal outlays associated with the influx of Ukrainian refugees and rising security expenditure, and also the impact of persistent labour shortages driven by Ukrainian economic migrants returning to support the war effort. The 2022 nominal GDP growth forecast for Poland's two largest cities, Warsaw and Krakow, dropped by 5.3% (from 9% in February to 3.7% in April) and 4.8% (from 9.7% to 4.9%) respectively. Wholesale and retail trade account for 22% of all gross value added (GVA) in Warsaw and its estimated 2022 GVA growth dropped from 9% in February to 3.6%. in April. This contraction in the wholesale and retail trade sector contributed to the decline in Warsaw's 2022 GDP growth rate.

Krakow is characterized by a large manufacturing industry (26% of all gross value added) that suffered from rising inflation. The small mining and agriculture industries in both cities benefited and GVA was boosted by increased demand and exports. However, these industries contribute less than 2% to Warsaw's and Krakow's total gross value added and so do not offset the cities' overall decline in performance.

Extended supply chain disruptions and elevated inflation damaging household purchasing power have also weakened Italy's growth prospects. These impacts have fed through to Italy's cities, with Rome's 2022 nominal GDP growth revised downward from 2.8% in February to -2.4% in April. This revision was larger than the country-level revision as Rome's key sectors real estate and public administration took negative hits. In contrast, Florence's 2022 GDP growth forecast revision was smaller than the country level revision. The dominant sectors in Florence are manufacturing, and wholesale and retail trade, both of which improved slightly between the February and April forecasts.

The negative spill over effects of Russia's invasion are most pronounced in the construction and manufacturing sectors.

The war has particularly affected the construction sector by exacerbating historically high labour shortages, especially in Eastern Europe given the outflow of Ukrainian workers participating in the war effort. This is combined with a significant shortfall in the supply of lumber and a general reduction in demand for nonresidential buildings. According to data sourced from our Global Trade Atlas, Russia ranks as the largest exporter of lumber to the EU, followed by Belarus, and Ukraine, which collectively accounted for 42% of total imports by value in 2020. Soaring energy costs are also having a negative impact on building material manufacturers, resulting in a reduction in output of certain products. As a result of these factors, our Construction Service anticipates that real construction spending in Western Europe will grow at a significantly slower rate of 1.6% in 2022, down from 5.8% in 2021.

Manufacturing in Europe has also been negatively impacted, especially in certain manufacturing sub-sectors. Europe's steel sector, which provides crucial inputs for the automotive and construction industries, relies heavily on inputs from Russia and Ukraine - both countries rank in the top five globally for reserves of iron ore. Russia is the EU's largest source of iron and steel imports, representing 16.6% of the EU's total imports by value in 2020 - Ukraine was the fifth largest at 9.2% of total imports. The manufacturing sectors most affected by the war are automotive, electrical equipment; machinery and equipment; and computer, electronic, and optical products. Key inputs for these sectors are palladium (with 40% of global production coming from Russia) and neon gas (with Ukraine providing 90% of worldwide supplies). Moreover, Ukraine is a leading source of wiring harnesses for cars. The disruption on key inputs supply has severely impacted the production of light vehicles.

Certain sectors have instead benefitted from the war, notably agriculture and mining. This is largely because of the need for substitutes in cases where supplies are concentrated in Russia and Ukraine. Agriculture is in general less dependent on international supply chains, so shortages of raw inputs from Ukraine and Russia have less of an impact. However, this is not the case for food manufacturing, which is dependent on raw material inputs from local and international markets. As Russia and Belarus are important producers of raw materials for fertilizer agricultural production will slow down in regions where this cannot be replaced.

Discover the latest analysis on the global impact of the Russia-Ukraine war.