Styrene: The calm before the storm

Styrene monomer prices dropped substantially at the end of 2018 and remained stable at around $1,000 - 1,100 per mt for most of this year, before seeing another sharp drop in October. Market players were surprised that there were no seasonal price fluctuations and margins remained low this year despite limited capacity additions.

Usually, a sharp spike or drop in styrene prices is driven by sudden changes in supply, rather than in demand. There are many factors which can influence supply situations but operating rate changes, scheduled maintenances and unexpected shutdowns due to operational issues are the usual factors. 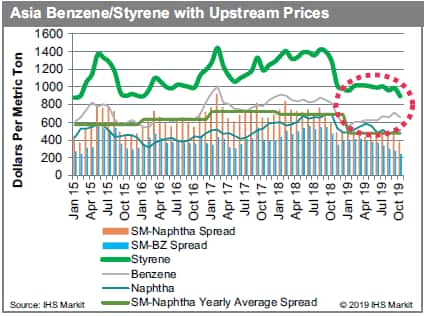 Operating rates of styrene producers usually have a greater impact when producers' margins are negative or around breakeven level. Considering that the margins for styrene producers have been positive in recent years, most producers would have operated at maximum rates to enjoy healthy margins. Hence, scheduled maintenances or unexpected outages would have larger impact on market supply.

Capacity losses during the second quarter in Northeast Asia were larger than other years mainly due to higher planned and unplanned maintenance shutdowns by South Korean producers. However, this did not affect market prices as the Chinese capacity losses were smaller due to lower planned maintenance shutdowns and operations were steady, supported by positive margins.

Historically, large planned and unplanned shutdowns in South Korea would typically severely impact the prompt spot market prices in Asia and China because of a heavy dependence on imports from South Korea to the Chinese market. However, this changed since June 2018 after China imposed Anti/Dumping Duties (ADD) on imports from South Korea. After the implementation of ADD, the Chinese import demographic has changed drastically and China became more dependent on imports from other countries and regions including the Middle East, South East Asia, Japan and some European countries.

Another factor influencing styrene operating rates has been the fluctuating margin for derivatives.

In 2019, polymer margins have fluctuated more than in previous years. ABS margins in particular, have declined to negative territory during certain periods, not only due to weak demand but also high costs of other feedstocks like acrylonitrile and butadiene.

These negative margins for polymers also capped styrene prices as there was minimal restocking demand from the end/users.

The East China styrene inventory level is being used as an indication of the Chinese supply/demand balance. The Chinese inventory level follows a seasonal trend, usually increasing during spring when the demand for styrene increases after the Lunar New Year holidays and also in preparation of scheduled styrene plant maintenances during the same period. 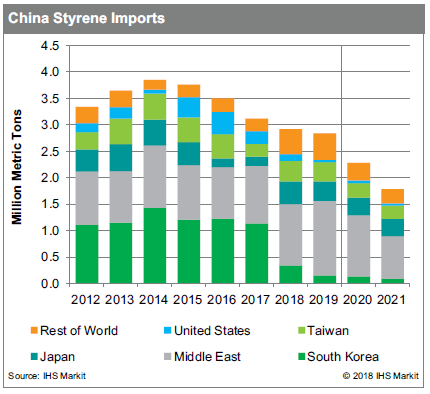 In 2019, inventory climbed very sharply in the first quarter of the year due to a couple of reasons. Speculative traders and distributors took long positions early in the year with the anticipation of the usual demand rebound and potential price hike, which often occurs during this period. There was a sharp price correction towards the end of 2018 and this encouraged some pre/buying or restocking demand in early 2019, with the anticipation that scheduled maintenances and limited capacity additions during the year would limit supply. 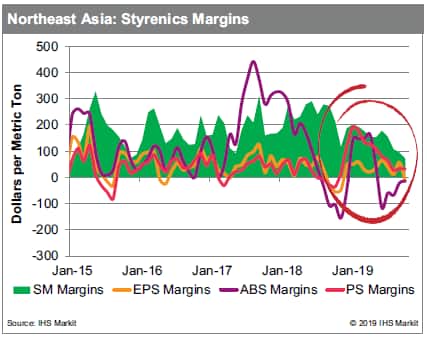 However, slower than expected demand recovery after the holidays due to on/going uncertainties regarding the US/China trade war and lower economic growth led to high inventory levels. And this has pressured prices during the second quarter of the year. 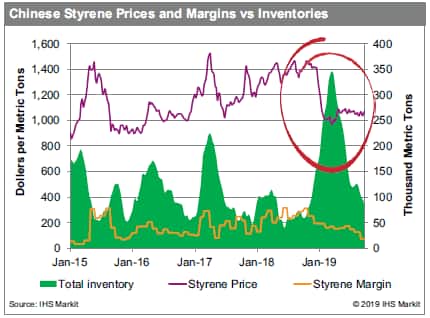 After reviewing the factors which led to stable styrene prices and lower margins in 2019, we have come up with some forecasts below.

After the latest round of major capacity expansions - which occurred in 2010 in China and the Middle East - styrene capacity additions have slowed and have at best kept pace with incremental demand growth. This was the main reason leading to a balanced market and healthy margins for the last 5 years.

However, as we have forecasted for the past couple of years, a big change will soon arrive. Heavy capacity additions - mainly in China - will start up within a couple of months. The increase in capacity will be much greater than expected demand growth. As a result, Asia's balance will change to a long market and the margins for styrene producers will decline substantially.

More details of balance and trade change for next five years are available in our World Analysis-Styrene. 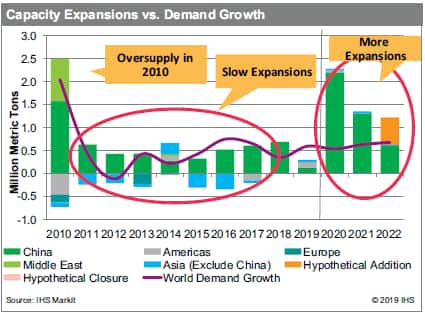