The stake of ethanol, which together with biodiesel, used to dominate the biofuels market, will remain limited in importance due to slow commercialization of cellulosic ethanol technology and the rise of electric vehicles in the gasoline vehicle fleet.

Although renewable diesel emerged just less than 10 years ago, it has become a strong competitor to biodiesel. Wide use of recycled feedstock in renewable diesel production contributes to a low carbon profile. Moreover, renewable diesel has superior compatibility properties over biodiesel under various conditions regarding infrastructure, engine specification and weather, making it a preferred choice in the high-blend market.

Developed markets, in particular North America and Western Europe, are shifting to renewable diesel due to ongoing modifications to legislations toward GHG reduction, which require greater amounts of low carbon fuel content in the transportation sector. Developing markets, led by feedstock-rich regions such as Southeast Asia and South America, continue to favor locally produced biodiesel. 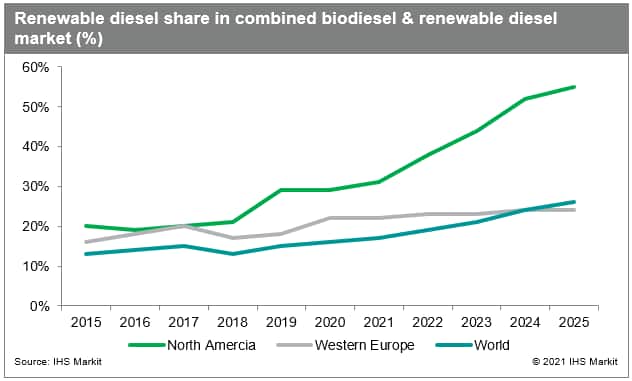 Renewable diesel capacities is going through a phase of rapid expansion in the U.S., led by global refiners retrofitting existing fossil fuel refineries to process renewable feedstock. Compared with the biodiesel industry owned primarily by agriculture players, new renewable diesel investments are on a much larger scale. These facilities are built to meet fuel market participants' tightening compliance obligations under the California Low Carbon Fuel Standard (LCFS), which aims to gradually reduce the carbon footprint of fuel blends sold in California. LCFS is extending in the Pacific Coast - more regions including Oregon, Washington and British Columbia will adopt similar legislation framework. Renewable diesel investment also fit in with the global decarbonization and energy transition strategy of refiners. By 2022, renewable diesel capacity in the U.S. will more than triple the level in 2020.

The rise of renewable diesel will likely result in a diverging trend in the U.S. biodiesel industry, which is expected to decline due to competition from renewable diesel, particularly in the feedstock market. The low carbon feedstock market is experiencing surging demand and higher prices. Small-scale biodiesel facilities utilizing recycled oils will likely be the first to run out of business due to ongoing cost pressure. This will affect the biodiesel catalyst providers, as well as the glycerin industry, a byproduct of biodiesel production.

Among other major markets, Europe will also see renewable diesel growing faster than biodiesel under REDII, but also potentially in renewable jet fuel. In Southeast Asia and South America, particularly Indonesia, Thailand, and Brazil, biodiesel will continue to dominate and grow under higher biodiesel mandates. Traditional exporters such as Argentina and Malaysia are facing stagnant export markets due to more countries establishing trade policies to protect the local biodiesel industry, as well as the preference of low carbon feedstock in the buyer markets that have established GHG reduction legislations.

Accelerated growth in renewable diesel will have a huge impact outside of the oleochemical value chain as well, driving further commercialization of major renewable diesel manufacturing technologies that are adopted by refiners entering the space.

The manufacturing process of renewable diesel can also be configured to produce other renewable products such as renewable jet fuel, which is set to grow in the European market; as well as renewable naphtha, the feedstock for emerging bio-attributed plastics markets.

It will also open room for hydrogen investing, as the hydrogenation process of renewable diesel production, particularly in the large-scale refinery retrofitting plants, will require higher amounts of hydrogen over the next few years.