According to the preliminary estimate for Georgian fourth-quarter GDP growth from the National Statistics Office of Georgia (GeoStat), the economy ended last year on a strong note, expanding by 4.5% year-on-year (y/y). Annual growth accelerated, against an unfavorable base effect. 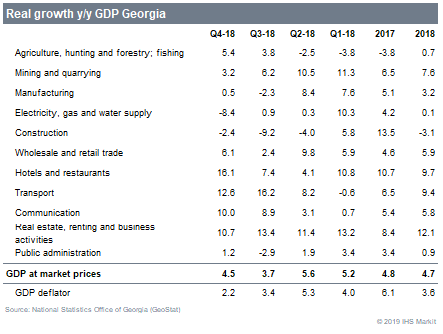 The strong end brought the annual economic expansion rate for 2018 as whole to 4.7%, marginally below the flash estimate of 4.8%, which also coincides with the 2017 growth rate. Real growth in the final quarter of the year was supported by low inflation, as demonstrated by the moderated increase in the GDP deflator in the final quarter.

Manufacturing growth in the fourth quarter returned to positive territory notwithstanding a decidedly more unfavorable base effect in the final quarter of the year, while construction contraction clearly moderated. No service sectors contracted in the fourth quarter, while the leading domestic trade sector boasted another impressive quarter. The branches of hotels and restaurants, transport and communication all expanded by double-digit rates. 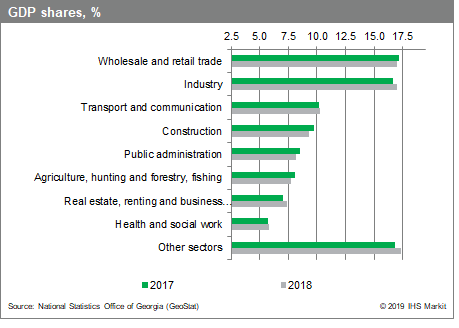 The weakness of the manufacturing sector in the second half of the year compared to the first half forced the industrial sector's GDP share to drop further in the final quarter, from 17.0% in the third quarter to 16.5% in the fourth. However, while it was overtaken by domestic trade as the leading growth contributor, these two sectors tied as the locomotives of the economy for 2018 as a whole.

Annual data reveal a modest but clear rising trend in the industrial sector's GDP contribution during 2016-18. The importance of construction diminished again, while the agricultural sector continued its decline, on an annual perspective.

We continue to believe that GDP expansion will decelerate in 2019

The Georgian economy in late 2018 performed somewhat better than we originally expected, and our current forecast for Georgian GDP expansion for this year stands at 4.0%. The latest "Rapid Estimate for Economic Growth from GeoStat supports the outlook for slowing growth, putting January expansion at 3.5% y/y.

Demand from oil exporter countries Azerbaijan and Russia is likely to remain muted, given the low oil prices. In addition, exports to Turkey are subject to major uncertainty at present, taking into account of Turkey's own persistent economic and financial fragility.

Moreover, Georgian financial regulations have recently toughened. This is necessary in order to increase Georgia's financial resilience, given the persistent problem of dollarization. However, the immediate impact from increased regulation is likely is to suppress domestic credit growth, with expected negative implications for household spending and overall economic activity.

Moreover, real growth is likely to slow down also because the trend of easing GDP deflator growth seen since late 2017 is likely to halt now. Notably, we expect that some delayed impact from the recent depreciation of the lari will still push inflation at least temporarily above the target (currently set at 3.0%). Meanwhile, the assistance from the recent lari weakening against the USD on export competitiveness is restricted by depreciation of the Russian ruble.

In the medium term, we expect the performance in the construction sector to strengthen again, with investment prospects in the hydropower sector particularly lucrative, while also the technology and communication service fields are likely to attract substantial amounts of FDI inflows. Meanwhile, additional infrastructure investments are needed in order to further support the promising tourism industry.