The recent mix of Georgian monetary policy decisions reflects the complicated operating environment, characterized by dollarization and still developing institutions. For example, the National Bank of Georgia (NBG) in July saw it appropriate to combine an interest rate cut with an increase in reserve requirements for foreign currency financing for banks, in order to keep supporting the relative attractiveness of lari (GEL) funds.

The lari is vulnerable to the current volatility of international financial markets, in particular as it pertains to key trading partner Turkey, currently battling a currency crisis. Turkey in the first half of 2018 accounted for 9.7% of Georgian goods exports. Moreover, it provided 15.2% of total FDI inflows in 2017.

Georgian inflation is currently coming to the end of its recent easing path. Over the first half of 2018, the lari strengthened by 7.6% cumulatively in real effective terms. The strength of the exchange rate has a direct suppressing impact on inflation, given Georgia's continued dependence on imports. Inflation in July reached its target rate of 3.0% year-on-year (y/y), while the output gap is closing. Meanwhile, exchange rate pressures are rising, as the significant weakening of the Turkish lira, is likely to have a downward impact on the lari, as will any major depreciation of the Russian ruble. In international financial markets the overall sentiment is turning away from riskier investments. Consequently, further rate cuts may again be combined with tightening moves elsewhere, the intention being to uphold attractiveness of lari assets.

Having come in at around 9% of GDP in 2017, Georgia's persistent external deficit marks a major set of credit risks on Georgian sovereign credit profile. Moreover, the current account in the first quarter of 2018 deteriorated in annual comparison for the first time since the fourth quarter of 2016. The outlook in the near term is clouded by the weakened prospects of external demand.

However, the deteriorating near term outlook and rising external risks come against structural improvement. Indeed, full-year 2017 external accounts data confirmed that the service account surplus has now solidified its position as the leading positive current account component, leaving the secondary income account in the second place. This puts Georgian foreign currency inflows on a more solid footing. Moreover, the success of the tourism sector will benefit also related service fields such as domestic trade and transport. Furthermore, this can be expected to have positive consequences also for the developing banking sector. 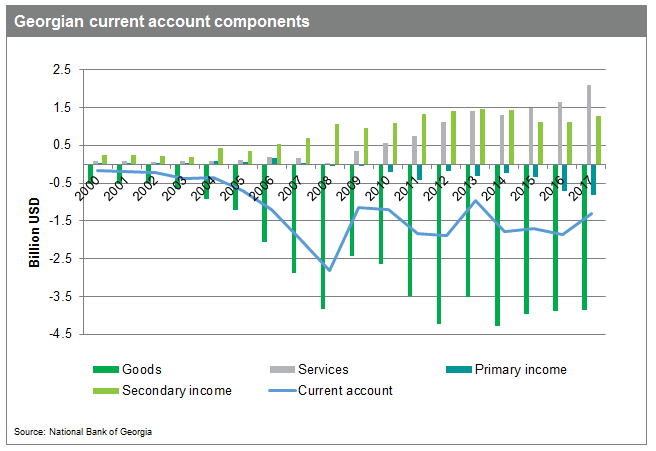 Also remittance data have recently shown some notable structural changes. Indeed, the latest figures on workers' remittances show that, for the first time, remittance inflows from the European Union (EU) countries exceeded inflows from Russia in the first half of 2018. This development marks a welcome fall in Georgian dependence on Russian economic fortunes for foreign currency inflows, mirroring its success in diversifying its energy importers and export markets.

Also the Georgian monetary sector is facing these rising inflation and exchange rate risks from a strengthened position. The monetary authorities have taken measures to encourage the "larization" in the banking sector. The NBG has made efforts to widen the tools of monetary policy and to make lari funding more attractive. The interest rate differential of 20 basis points between reserve requirements on lari- and dollar denominated funds encourages banks to attract lari funds. Moreover, the Basel III liquidity coverage ratio favors lira-denominated funds. 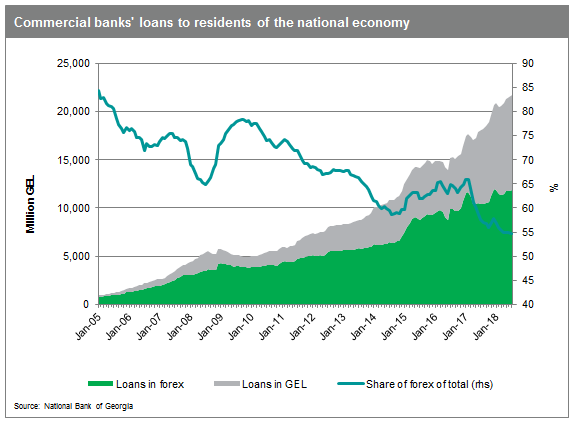 For now, the lari remains supported by reasonably healthy foreign currency inflows on the current account. Thus, any abrupt lari weakening would be mostly the result of contagion effects from volatility of other currencies, rather than reflective of any major external financing difficulties of Georgian origin.

Banking sector reforms and efforts to strengthen the export base need to continue in Georgia, however. Encouragingly, Georgia's economic transition program with the International Monetary Fund (IMF) outlines further financial sector reforms and de-dollarization steps among program prioritizes, as means to help in anchoring inflation expectations and in helping to increase the efficiency of monetary policy. Given that Georgia has already progressed well in developing its monetary policy framework and successfully implemented the flexible exchange rate regime, further progress in reforms is likely, notwithstanding the recent changes in government. Continued progress in financial sector development is necessary to support long-term growth potential, as only a banking sector that acts as an efficient financial intermediary is able to guarantee development of a dynamic, inclusive private sector in the economy.