In the latest development to the prolonged industrial relations saga, the Rail, Tram, and Bus Union (RTBU) late last week filed an application with the Fair Work Commission to conduct a ballot of its membership to conduct industrial action against PN.

Sources said a FWC approval is but a formality and the members are expected to vote in favor of protected action. It is understood the ballot process is likely to take up to three weeks, and if talks between the union and PN are not fruitful, there could be strikes.

The enterprise bargaining agreement (EBA) talks have been ongoing for the better part of 10 months, and union sources say the talks have reached a stalemate giving it "no option but to apply for a protected industrial action."

Negotiations have been particularly fraught after PN was taken private last year, after an infrastructure consortium successfully bought over Asciano. It is understood the unions are calling for an independent arbiter in dispute resolution as well as a transparent process in dealing with redundancies. However, the chief issue, as in other disputes, is over workforce casualisation.

A PN spokesperson said at this point there was no notice of proposed industrial action by RTBU members.

Meanwhile, a four day strike has been underway at Glencore's thermal coal operations in the Hunter Valley, New South Wales, since Sunday morning.

This is the longest and largest strike in a campaign which began in June, and has previously been limited to two day actions.

Tools were downed at six operations simultaneously for the first time, with at least 1,400 workers hitting the picket line.

It comes as negotiations between the Construction Forestry and Mining and Energy Union (CFMEU) and Glencore sour, with the union fighting against worker casualisation as well as wage parity for contract workforce.

It is understood the CFMEU was seeking what is called "jump-up rates" for the contract workforce, which essentially means they are paid the same rate as permanent workforce at a particular site. However, Glencore is believed to have rebuffed that demand.

A union official said they will now ask Glencore to come up with a plan to progress the talks and a few more rounds of negotiations are likely this week.

Five of Glencore's mining operations and two of its coal handling and processing plants have been affected between 0600 h local time Sunday and 0600 h Thursday.

Meanwhile workers from a sixth Glencore operation, the 3 mt/y Bulga underground mine, joined the action from 0600 h Tuesday.

The strikes are beginning to bite Glencore, some sources claim, with the miner now experiencing difficulty meeting some shipments, they suggest. Sources said Glencore is looking for at least two cargoes for supply into its Japanese contracts and is understood to have sought the material from other Hunter Valley producers.

"There might not be optionality in the contracts to supply from Glencore's other mines in South Africa and they'll have to supply mine specific products into Japanese contracts," said a trading source.

Drilling and blasting operations are particularly impacted, with the 4.3 mt/y Liddell open-cut mine said to have no exposed coal at the moment, according to sources.

Glencore maintains that operations are continuing at the sites and they will continue to deliver coal to customers. But a Glencore spokesperson added production might be affected if the strike action carries on without any resolution.

But this latest strike could put increased pressure on an already tight supply situation, some market participants say.

"So far the strikes have just been noise to the market, but a four day strike could be significant in limiting supply," said one Australian trader.

Another trading source added Newcastle market was facing "the perfect storm" as the track issue at Ulan line was compounded by the three day planned maintenance shutdown of the entire Hunter Valley rail network until 17 August.

Data from the Hunter Valley Coal Chain Coordinator shows inbound railings to Port Waratah Coal Terminals has fallen, with only 82,000 t railed in the last 24 hours and diminished port stocks at 1.00 mt compared to 1.26 mt on Sunday (13 August).

Some traders were already adjusting their outlook in light of the prolonged support for prompt prices, taking a firmer view until the end of the year.

Overnight, Newcastle paper for September and October were assessed at $92.80/t and $90.40/t respectively. 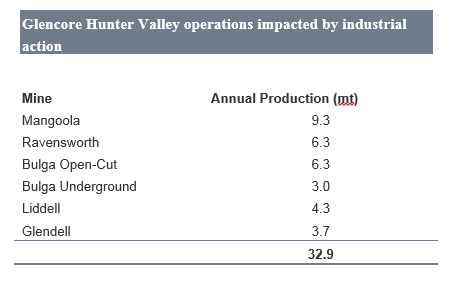 Learn more about our coal news for APAC and Africa markets.