However, its benefits and user-friendliness have made plastics a victim of its own success. Due to excessive littering and lack of proper post-use manage-ment, major environmental issues have developed. The millions of tons of plastic litter that end up in the oceans every year are one of the most visible and alarming signs of these problems, escalating public concern and the dismay of authorities. Between 150,000 and 500,000 tons of plastic waste enters the oceans of European Union countries each year.

Apart from marine litter, microplastics - which are fragments of plastic below 5mm in size - accumulate in the sea, where they are easily ingested by marine life. Recent studies have also found microplastics in the air, drinking water, and foods such as salt and honey, with yet unknown impacts on human health. It is estimated that between 75,000 to 300,000 tons of microplastics are released into the environment every year in the EU. At the same time, landfill and incineration rates of plastic waste remain high, at 31% and 39% respectively. While landfill has decreased over the past decade, incineration has grown.

Lack of proper disposal has also led to suboptimal value capture. According to estimates, 95% of the value of plastic packaging material is lost to the economy annually after a very short first-use cycle. Demand for recycled plastics today accounts for only around 6% of plastics demand in Europe. This low demand may be due to the fact that much of the collected plastic waste was, until recently exported to countries such as China.

Plastics Recycling Strategies in the EU

Increasing the recyclability of plastics requires a focus on plastics packaging. Today packaging accounts for about 60% of post-consumer plastic waste in the EU (see Figure 1). Better product design is one of the keys to improving recycling levels. Experts calculate that design improvements could halve the cost of recycling plastic packaging waste. Recently the European Commission announced a series of measures to curb and manage use and disposal of plastics. Four primary objectives are behind the EC move: 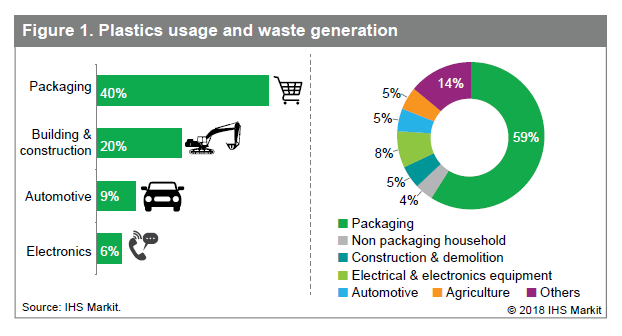 In a recent strategy paper, the European Commission proposed that at least 50% of all plastics packaging in the EU should be recycled by 2025. The number rises to 55% by 2030. The paper also urged member states to reduce consumption of plastic bags to 90 per person annually by 2019 and 40 bags per person by 2026. The paper also focuses on improving product design to makes plastics more durable, easier to repair, and easier to recycle. In addition, the EU urges member states to monitor and reduce their marine litter. The paper holds producers responsible for contributing to the aware-ness, clean-up, collection, and waste treatment of plastic packets and wrappers. It also identifies the following items as the most polluting single-use plastic products:

Although this tax is currently in the discussion stage and details are sketchy, such narratives show how authorities are working to cap the use of plastic by fiscal and non-fiscal means.

The EU authorities acknowledge the importance and value of plastics in the economy and society. However, they want to promote a responsible, managed use of the product and generate optimum value through recycling and repairing. Given the resolve of these authorities, it is clear that the proposed regulations and legislation are irreversible. Executives in the plastic industry are wise to collaborate with the various stakeholders to support the initiative and work towards meeting the target. The European Commission is also introducing the concept of new extended producers responsibility (EPR), which will require plastics producers and intermediaries to manage and enact the targets set by the Commission.

Although the short-term outcome of the regulation is likely to be detrimental to plastics demand, the authorities are playing the role of facilitator - not inhibitor - by containing long-term fallout and promoting design and innovation. By addressing environmental and consumer concerns, the EU is taking a leadership position that may become a template for other regions. Therefore, the plastics industry should adopt a holistic global approach to long-term scenario planning for the impact of EU regulation and not desist from managing their responses to these new regulations.

For almost a decade, a seemingly ideal business model addressed recycling in Asia: China produced goods and took back the packaging. This model balanced the trade deficit and utilized empty containers through reverse haulage. Global plastic waste fueled dynamic demand in China, and thousands of recycling companies provided competitive raw materials. Imports of plastic scrap peaked in 2016 at roughly 8 million tons, representing almost half of the global traded recyclable plastic. Under this model, advanced countries such as the U.S., Japan, and almost all of Europe relied on China to take their waste.

Increasing environmental issues forced China´s authorities to close the doors. On January 1, 2018, China stopped the import of 24 kinds of solid waste, including plastics waste. Under the new standard, China will only accept recycled plastics that are less than 0.5% contaminated. This program, named "National Sword," will heavily impact market players along the chain. Chinese recyclers will lose the access to high-quality scrap from the developed world. Instead, China will need to focus on local plastic scrap, which is considered low quality. What's more, official inspections will take place; in case of violations of environmental rules, recyclers will lose their licenses.

There is also a ripple effect that affects Southeast Asia's emerging countries. Plastic recycling is a billion-dollar business, providing enormous margin opportunities if crude oil prices pushes virgin materials above $1,200 per metric ton. To keep their businesses running, Chinese recyclers began making investments in various countries, such as Vietnam, Malaysia, and Thailand. These countries are competitive in their cost positions, and they provide significant profit opportuni-ties to the Chinese plastics community. Consequently, there is a massive ramp up in plastic exports towards these countries (see Figure 2). 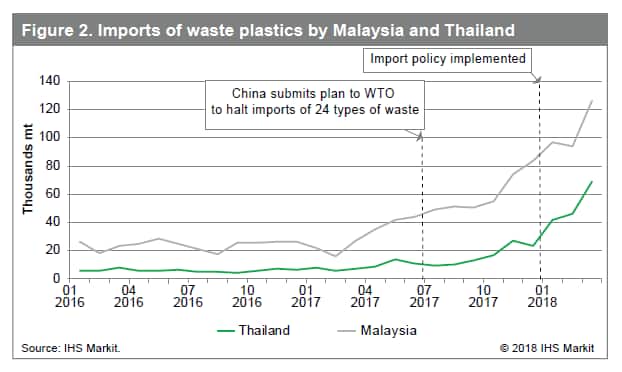 In March 2018, Malaysia and Thailand imported almost 200,000 tons of plastic scrap, the same volume imported in all of 2016. But these countries were unprepared to receive such a huge wave of waste. There are serious limits to their port facilities, logistics, and qualified disposal plants. Recycling companies were constructed in shortest possible time, and many more are planned. Thailand received requests to license more than 1,000 additional recycling facilities, almost all of them from Chinese companies. It is estimated that already more than 500 Chinese recyclers have moved their operations to South Asian countries.

But these importing countries are turning increas-ingly defensive. Thailand has put licensing on hold and Vietnam is expected to stop plastic scrap imports for a few months to attempt to gain control of the imports. Thousands of containers are stored in Thailand's harbor areas, uninspected and without any clear ownership. As governments assert control, they will begin inspecting shipments and fighting against scrap smuggling. Restrictions will be imposed and the first import licenses may be revoked. To avoid China's pollution problems, these Southeast Asian countries may quickly take steps to stop uncontrolled growth of recycling activities. For these newcomers to plastics recycling, the war on illegal rubbish and toxic scrap is just beginning.

The study will address the following key issues:

How will breakthrough technologies impact the #chemical industry transition from the linear model to a circular eco… https://t.co/wJL0g97KGS