Given the data distortions caused by the later than normal income tax filings, it is more insightful to look at the second and third quarters combined to get a truer trend in regional tax collections. During the period from April to September, state tax collections fell 7.8% y/y in 2020, with declines occurring across all major revenue sources. Severance tax revenue saw the largest decrease (down 51% y/y) as energy markets remained depressed throughout the spring and summer, while income tax collections fell 6.6% below year earlier levels despite the significant rebound that occurred during the third quarter. Even with a healthy uptick in consumer spending in the third quarter fueled by federal stimulus payments and the initial reopening of state economies, gross sales tax collections from April to September fell more than 8% compared to the same period in 2019. 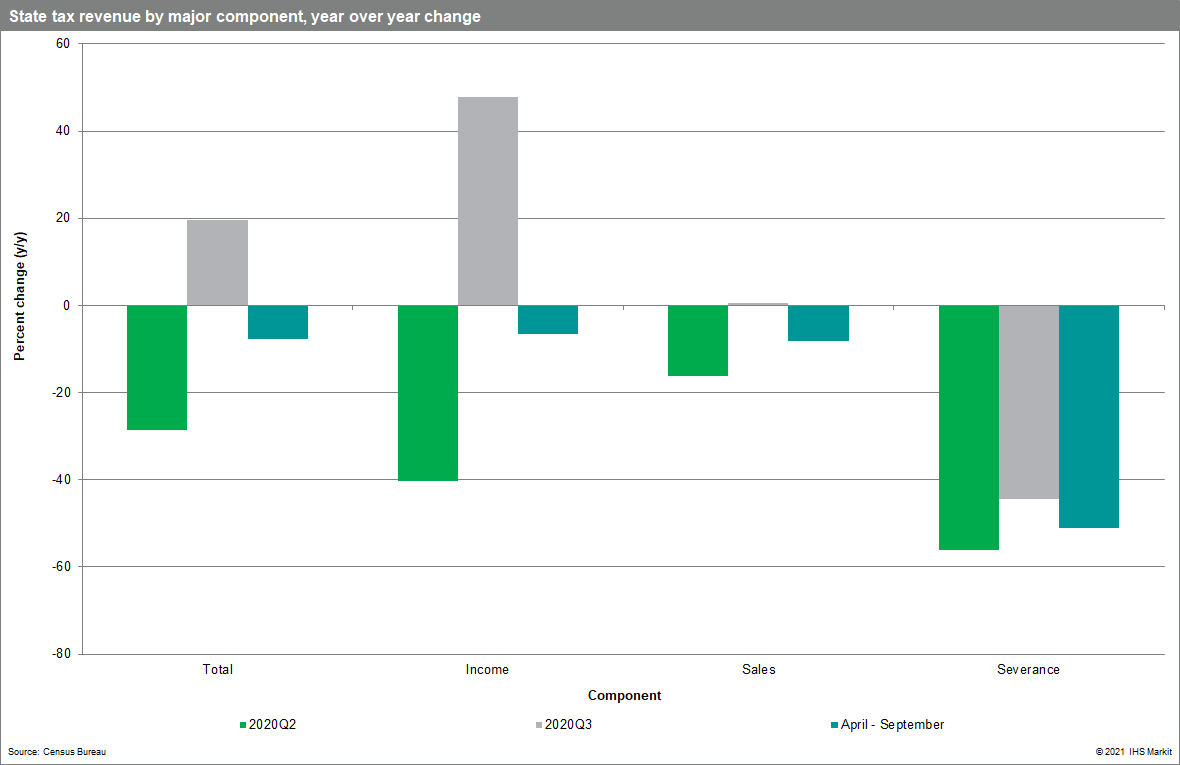 Overall declines were particularly steep in the Pacific region, including y/y losses in Hawaii, Alaska, and Washington of nearly 30%, and in New England, where Connecticut and Massachusetts saw 36.9% and 19.4% y/y declines, respectively. Southern states, on the other hand, fared better than their coastal counterparts. In addition to Arkansas and Alabama seeing positive y/y growth during the first six months of the pandemic, Georgia, North Carolina, and Tennessee all experienced declines of 2% y/y or better. 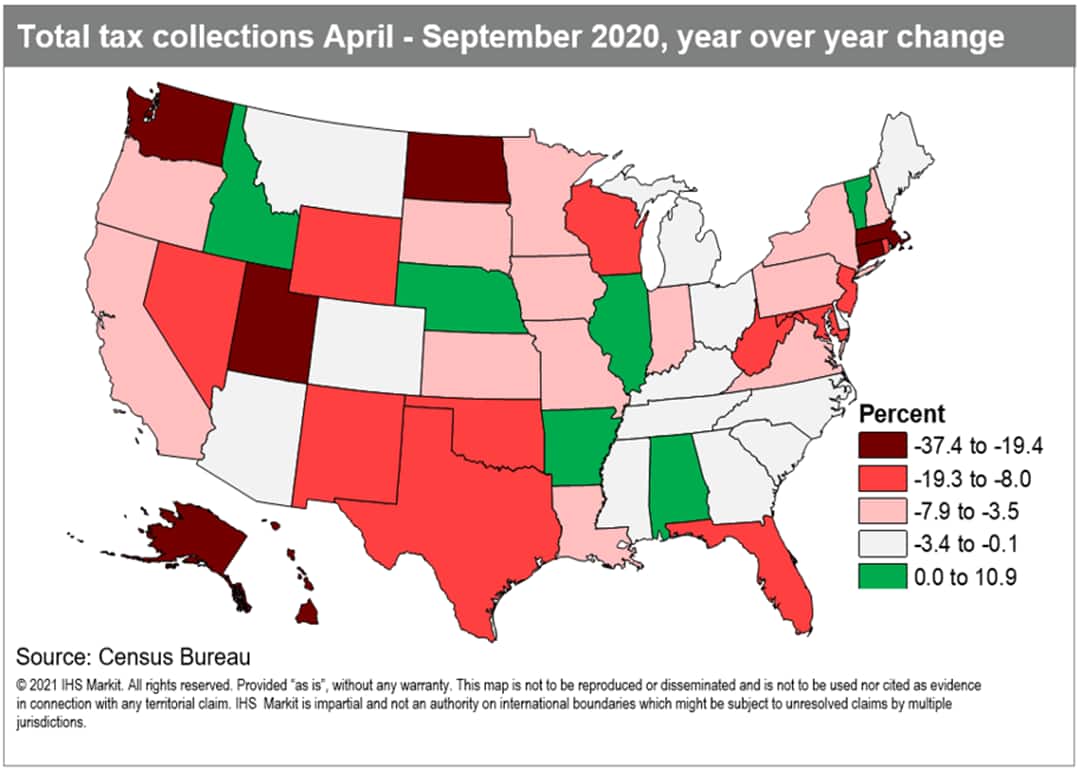 Outside of regional patterns, states with comparable tax structures also experienced similar changes in total revenue over the first six months following the onset of the COVID-19 pandemic.

While all major revenue sources declined in the second quarter due to the initial impacts of the pandemic-induced downturn, severance tax revenue was the only one that did not see a sizeable quarter-over-quarter rebound in the third quarter, with revenues remaining essentially flat.

Following severance taxes, gross sales tax collections saw the next steepest decline across the second and third quarters compared to 2019. In turn, those states most dependent on sales tax collections largely saw steeper-than-average declines in total revenue over the six months from April to September. Excluding energy-reliant states, the ten states most reliant on sales tax revenue averaged a 10% y/y decline in total revenue over the second and third quarters of 2020 compared to an average decline of 5% in the ten states least dependent on sales tax revenue. This difference in outcome is even more striking when considering consumer activity was stronger, on average, in the most sales tax-reliant states over the first six months of the pandemic.

Of the most significant sources of tax revenue, income taxes proved most resilient during the first six months of the pandemic, as a significant amount of income tax revenue in the first half of the year is derived from liabilities from the previous year. In addition, the enhanced unemployment benefits included in the CARES Act were considered taxable income, further buoying income tax collections over the spring and summer. States without a personal income tax, however, were unable to reap the benefits of these circumstances and saw overall revenue suffer as a result. Outcomes differed within the group of income tax-collecting states, as well. Indeed, of the forty-one states that collect an income tax, the ten states with the highest average wage saw an average y/y decline in revenue of 10.1% compared to a 1.2% average contraction in the ten states with the lowest average wage level.

In addition to enhanced benefits paid out to individuals, the CARES Act passed in the spring of 2020 also provided more than $200 billion in aid to state governments. When comparing the amount of federal spending received by states to changes in tax revenue during the period from April to July, the states that saw the steepest revenue declines generally saw more substantial levels of aid on a per capita basis. The revenue declines in North Dakota, Alaska, and Hawaii, for example, rank among the five deepest contractions, and they also ranked in the top quintile of federal aid received on a per capita basis. On the other hand, states such as Arkansas, Alabama, and North Carolina, whose revenue collections proved relatively resilient over the spring and summer, saw federal inflow levels among the lowest in the country.

The Coronavirus Relief Fund established by the CARES Act provided a minimum of $1.25 billion to every state regardless of changes in tax revenue, which caused multiple states with smaller populations to serve as outliers to this trend. Due to the combination of this funding floor and their small populations, states such as Delaware, Montana, and Vermont saw substantial inflows on a per capita basis despite tax revenues faring relatively well. Cases such as these might lead one to think federal aid per capita is more heavily influenced by population rather than revenue changes. When pairing states by population sizes, however, the state that saw a deeper y/y decline in tax collections from April to September saw a greater amount of federal aid per capita 68% of the time, showing that a relationship between revenue and federal aid still holds. These data do not yet include funding related to the COVID relief bill passed on December 27th, but we will include during a future commentary as the state distribution are tabulated.

With economic activity still well below year-prior levels, state tax revenues are expected to remain below pre-pandemic levels in the near term. While income tax revenue proved relatively resilient over the second and third quarters of 2020 owing to the fact that a significant amount of collections are derived from prior year liabilities, significant employment contractions across the country due to COVID-19 indicate collections likely face an uphill battle in 2021 to return to pre-pandemic trends. While the mining industry continues its recovery, production is not expected to return to pre-pandemic levels in the near term, likely keeping severance tax revenues subdued for some time as well. We expect to see that the second round of federal stimulus payments passed in December 2020 increased consumer spending in early 2021, likely benefitting sales tax collections over the same period. That being said, consumption levels will cool over the first half of this year as the stimulus fades, followed by pent-up demand for consumer services leading to a strong increase in spending over the second half of 2021, assuming widespread vaccine distribution by the summer. The prospect of additional federal stimulus currently being discussed in Congress, however, could provide further upside potential for state revenues in the near term.