State economies measured by changes in employment and unemployment rates

With so many eyes upon the battleground states in the US general election, here is a brief look at the current condition of state economies in some of the most frequently cited states. While the states vary by geography, primary industries, population growth, and other major factors, more recently the global pandemic has been an overriding theme.

The recent performance of state economies, measured by changes in employment and by unemployment rates, has been a function of COVID-19 infection rates, timing of any infection "spikes", policy reactions to COVID-19, and states' primary industries. Over time, the duration of restrictions and mix of industries have contributed to broad differences in how employment has changed since February, the last full month prior to widespread reporting of COVID-19 in the United States. An overarching theme is that industries related to travel and tourism (especially places usually reached by air), plus dining outside the home were the most affected and will continue to be until effective treatments and/or widespread vaccinations are available.

Michigan, where manufacturing of automobiles and other durable goods remains a dominant industry, was hit early by widespread factory shutdowns in mid-March that were eased beginning in mid-May. Factory jobs have been steadily coming back but remain below peak levels, while restrictions on summer tourism and dining out have limited recovery in leisure and hospitality. Nevada continues to suffer from high rates of unemployment due to limits on casinos, concerts, and other entertainment activity, plus the fact that so many visitors tend to travel by air rather than by ground.

Florida's tourism industry, most visibly its theme parks, has struggled while other parts of the state economy have recovered relatively well. Pennsylvania's employment losses stem from heavy losses of tourist business, including international arrivals visiting the Philadelphia area, and ongoing restrictions on dining out and crowd size. 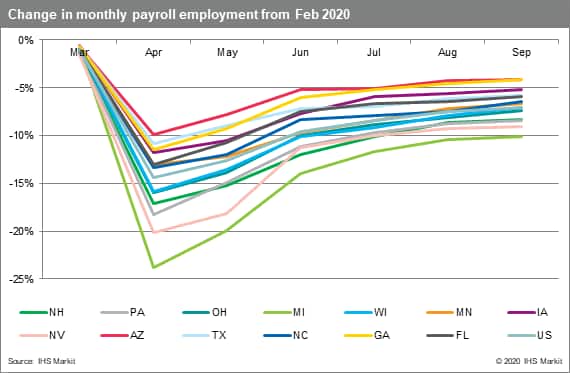 While some states, mostly located along the East and West Coasts, made the news in March and April for their early outbreaks, no state has been spared effects of the disease. Florida and Georgia are among the southern states that got in on the act when beach-going season heated up, with the virus also reaching more rural and small-town portions of the country despite their relatively low population densities. The return of students in August also created conditions that were ripe for rapid spread in college towns, some of which had been mostly unaffected up to then.

At this point, all of the battleground states have monthly employment at least 4% below the February level, with Michigan having the most ground to make up at -10.1%. While many states have shown marked improvement from April lows, from here job gains will become more difficult to achieve. Even without lockdowns or other official restrictions, further job gains will be sluggish until a significant increase in travel and tourism activity (including a return of international travelers) occurs, along with consumer confidence that being in crowded restaurants and entertainment venues is safe. The move toward remote office work also creates question marks for the nature of the recovery, with many service-sector jobs tied to the presence of droves of office workers in urban environments.