The eurozone economy remained close to stagnation at the start of the fourth quarter, according to the latest flash PMI data, with demand for goods and services falling for a second successive month to hint at a risk of a downturn.

At just 50.2 in October, the 'flash' IHS Markit Eurozone Composite PMI® rose only marginally from 50.1 in September to register the second-smallest expansion of output since the current upturn began in July 2013.

The PMI points to a quarterly GDP growth rate of just under 0.1% in October, although nowcast models incorporating a wider dataset as well as the PMI look even weaker, and suggest there's a risk of GDP contraction in the fourth quarter. 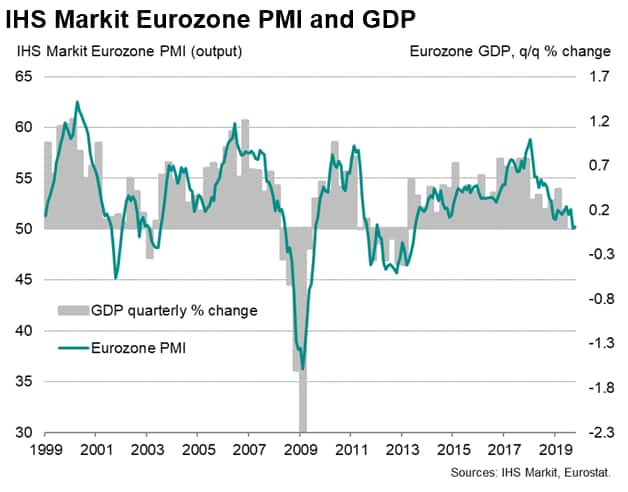 The malaise was once again primarily a reflection of a steep deterioration of manufacturing business conditions, where factory output fell for a ninth successive month. The rate of decline was only marginally weaker than seen in September to indicate that the goods-producing sector remained in its deepest downturn since 2012, linked in turn to a further steep fall in new orders.

However, the sharp decline in manufacturing output was accompanied by one of the weakest service sector expansions since 2014 as new business inflows into the sector slipped closer to stagnation.

The lack of new business meant overall backlogs of work fell for the tenth time in the past 11 months, hinting at the further development of excess capacity in both the service and manufacturing sectors. Future expectations for output meanwhile fell to the lowest since May 2013, prompting companies to take an increasingly cautious approach to hiring. 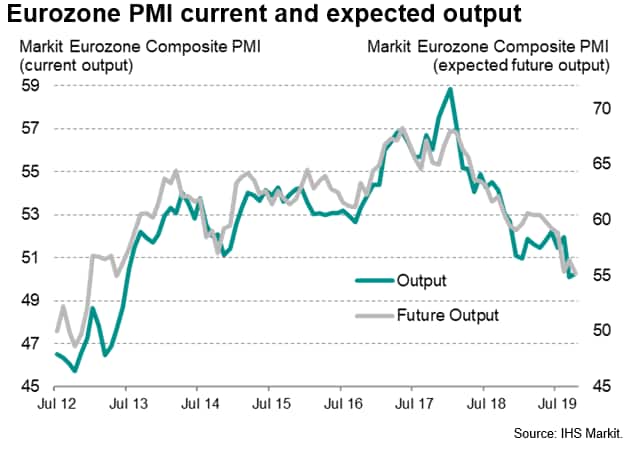 Lower expectations of output in the year ahead were commonly linked to global trade tensions, Brexit-related worries and increasingly gloomy economic forecasts.

Jobs growth consequently sank to the lowest since December 2014, led by the steepest loss of manufacturing jobs since the start of 2013. Service sector employment growth was meanwhile the lowest seen since January, and the second-weakest since 2016.

The concern is that a further deterioration in jobs growth adds to the risk that the trade-led weakening is spreading to the household sector, which could dampen growth further as we head towards the end of the year. 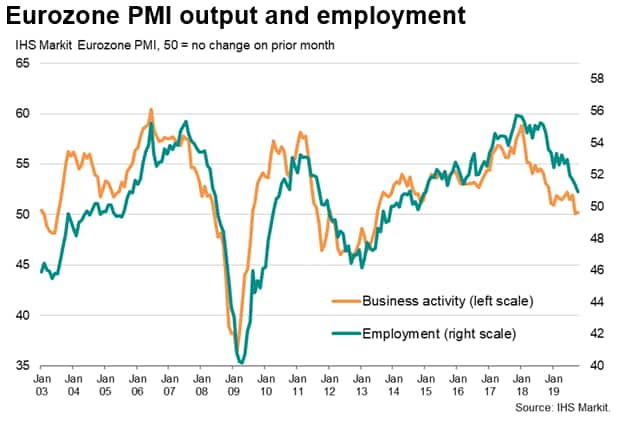 The subdued rate of selling price inflation in part reflected a lack of pricing power amid weak demand, but was also a symptom of subdued input cost inflation. Although lifting slightly on September, the average input cost increase was the second-lowest since September 2016. Producer input prices meanwhile fell at steepest rate since early-2016, and supply chain pressures eased - both are important indicators of inflationary pressures.

Eurozone PMI output and price data are consequently not moving in the direction the ECB would like to see, having recently unleashed a fresh stimulus package. The survey indicates that Mario Draghi's tenure at the helm of the ECB ends on a note of near-stalled GDP, slower jobs growth, near-stagnant prices and growing pessimism about the outlook, piling pressure on Christine Lagarde to drive new solutions to the eurozone's renewed malaise. 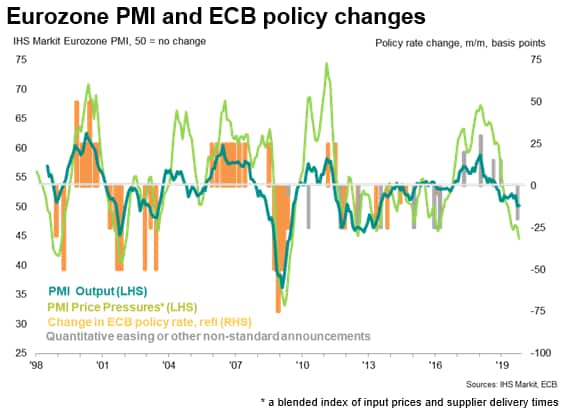