From start to finish: Stages of life impact on oil and gas greenhouse gas emission intensity

Governments, industry, investors, and other stakeholders are increasingly interested in understanding the implications of energy transition on the competitiveness of upstream oil and gas operations. Greenhouse gas (GHG) intensity, or emissions per unit of output, has become a key metric of interest. However, GHG emissions associated with oil and gas extraction through end use are variable and dynamic. Not only do GHG emission intensities differ from play to play, by extractive technology, by resource quality, and by operator efficiency, but they also change over time. Emissions during ramp-up and decline of an asset are potentially multiple times higher than during normalized midlife operations. In prior Insights, IHS Markit has explored some of these other sources of variability and uncertainty. This Insight discusses how emission intensity can evolve over the life of an oil- or gas-producing asset and why it matters.

"Life-cycle analysis" typically refers to the accounting of greenhouse gas (GHG) emissions that arise at each stage throughout the product's life. For liquid hydrocarbons, the stages typically include extraction or production, transportation to market, refining, and ultimately end use in a car or a truck (see Figure 1).

The GHG emission profiles of oil and gas operations, however, are dynamic and change over the life of an asset. GHG emissions and emission intensity for oil and gas operations will vary from month to month or year to year. Moreover, as a play moves through its life, the emission intensity will undergo distinctive stages. In some periods of the life of the operations, the difference in emissions can be significant—emission intensity during ramp-up and toward end of life can potentially be multiple times higher than normalized midlife operations. As a result, the stages of life will impact the shifting competitive pressures of energy transition on oil and gas resources and the mitigation strategies companies may pursue.

An illustrative example: Phases of life of an upstream (offshore) oil operation

In Figure 2, IHS Markit illustrates three phases of life in the GHG emission intensity of an oil- and gasproducing operation.*Further below is a brief description of each stage. It should be noted that although the relative scale can vary from play to play, this general profile is likely similar for most oil- and gas-producing operations. However, the duration of each of these phases can vary dramatically. While ramp-up is typically the shortest, the duration of midlife production and end of life can span decades. This example is drawn from a sample of large offshore crude oil-focused operations.** 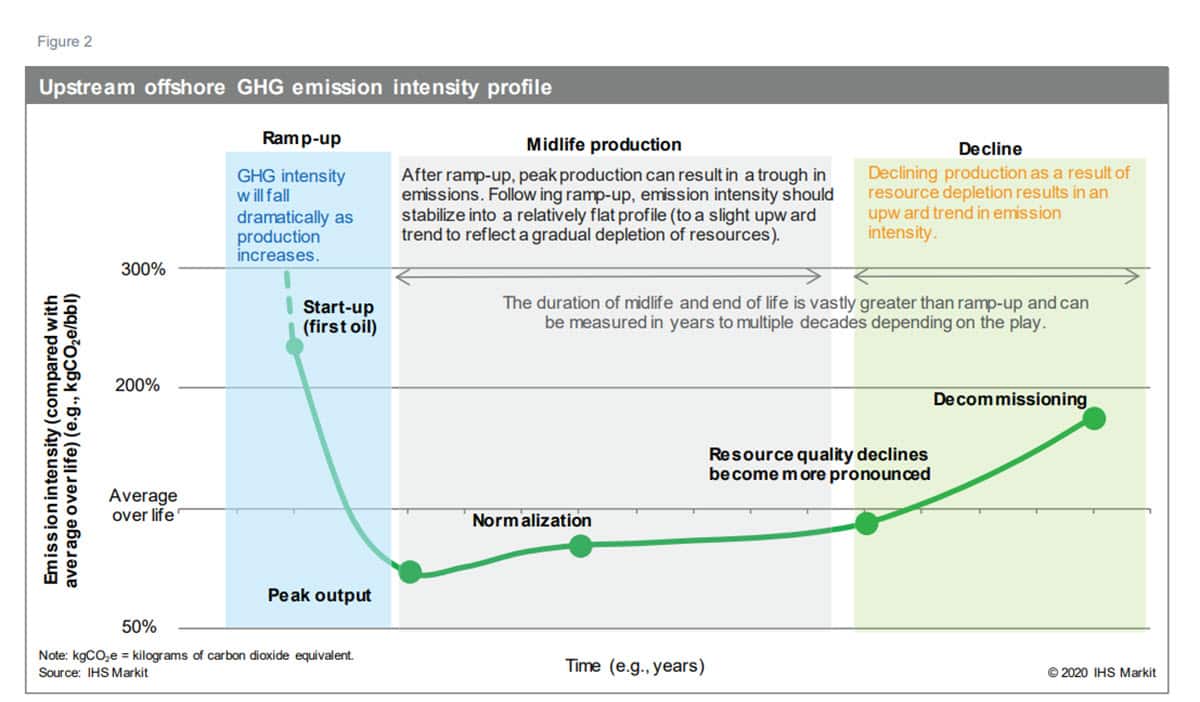 Because emission profiles are distinct in each stage of life, the approaches to emission mitigation may differ as well. The challenges posed by energy transition may also differ depending on not only where, but when the majority of an oil and gas company's production sits in its life cycle and the duration that each stage may span—and thus the significance of each stage. For example, finding ways to accelerate ramp-up or mitigate energy use (ramping energy use more attuned to production) can help reduce the ramp-up intensity and duration, as can ensuring emission mitigation infrastructure, such as natural gas gathering, is online to meet supply. Similarly, toward the end of life, greater concern over GHG emissions could encourage an earlier or more accelerated end to the economic life of production—truncating the rise in emission intensity. However, in many oil-producing regions, governments have imposed rules to preserve and maximize resource extraction. These rules can include explicit directives on how much resource must be recovered before an operator can terminate operations and decommission a facility. In some senses, these legacy rules may run counter to emerging policies aimed at reducing GHG emissions (absolute or intensity).

IHS Markit is investing in a more sustained GHG Accounting and Estimation capability—seeking to better understand the GHG emissions associated with the production through end use of hydrocarbons in our world today. This accounting of emissions is known as life-cycle analysis. This Insight, however, suggests that researchers should also consider how emissions may evolve over the life of an oil- or gas-producing operation, which may result in different strategies to improve the emission profile. This result underscores the complexity in trying to understand the implications of the energy transition on the oil and gas industry.

* Depending on whether someone is exploring emissions, cost, or production, there are different definitions for the life of an oil-producing asset. Examples include land acquisition, exploration, construction/development, and then decommissioning and restoration. For this Insight, we are focused on GHG emissions.
**The figure is derived by averaging the actual GHG emission intensity profile of a range of facility-based oil production operations, including from initial stages to near end-of-life operations. It should be noted that the generation of this figure is not a trivial endeavor and required modeling fields that have been in operation for up to nearly a quarter century
***Looking at emission intensity over shorter periods will show greater variability in emissions than the annual averages shown in Figure 1—planned maintenance outages or even unplanned outages do occur, which can result in emission intensity spikes over shorter periods

A Multi-Client Study is a landmark collaboration with Oil & Gas producers and financial institutions to develop a trusted methodology and GHG emissions estimates over the lifecycle of crude oil.
Find out More
Subscribe to RSS Feed