Developments in Sri Lanka underline the risk of destabilising social and labour unrest throughout Asia-Pacific because of rising living costs impacting the region.

Countries with similarly weak economic fundamentals and/ or poor economic policies have reduced resilience to external shocks, such as the COVID-19 pandemic, the Russia-Ukraine conflict, high oil prices and inflation and therefore are more likely to experience sustained and politically de-stabilising social unrest. Pakistan, Nepal, Bangladesh and Laos, for example, are particularly vulnerable to similar crises, but to varying extremes. 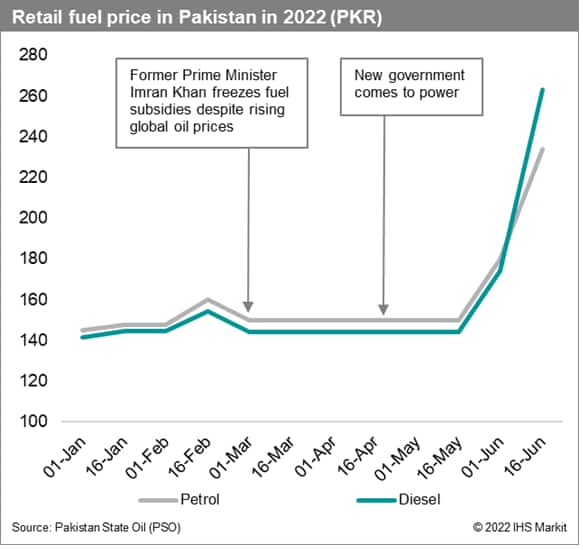 Sri Lanka's parliament on 20 July elected acting President and Prime Minister Ranil Wickremesinghe as the interim president to lead an all-party interim government. The government has since March 2022 faced mass public protests driven by the country's economic collapse. The resultant shortages of essential commodities - including food, fuel, and medicine - along with extreme inflation (which IHS Markit expects to exceed 45% over 2022) triggered a near total erosion of public confidence in the government of former president Gotabaya Rajapaksa.

Sri Lanka's new interim government will almost certainly seek to focus short-term efforts towards securing external funding - principally through the IMF and the other multilateral lenders but also from close strategic partners, including China and India - as well as concluding debt rescheduling negotiations. While IHS Markit assesses that an IMF programme is likely, disbursement of funds and therefore an improvement in domestic social conditions is unlikely till 2023. Beyond this, political instability is likely to continue, with parliamentary elections likely once economics stabilisation has taken place.

Sri Lanka's economic weakness has been the primary driver of the country's ongoing crisis. Foreign exchange reserves have decreased over the past three years, in part due to a decline in revenue triggered by fiscal policies under Rajapaksa's government and its resistance to negotiating a bailout with the IMF. Tax revenue fell to 7.3% of GDP in the third quarter of 2021 versus 12.8% in the equivalent period of 2019, just before the government introduced a series of tax cuts.

External factors have also had a compounding effect, with the COVID-19 pandemic undermining the tourism sector, the third largest foreign currency earning sector in the country, and the Russia-Ukraine conflict driving already high food and fuel prices. With debt servicing payments upcoming, the government was forced to declare a moratorium on its external debt obligations in April 2022. The government has allowed the rupee to free float, causing a severe depreciation in the exchange rate, which is projected to depreciate 82.3% against the US dollar by end-2022, and exacerbating inflation caused by shortages of imported goods and global inflationary pressures. Pakistan, the fragile external position, exacerbated by soaring global commodity prices, has already led to a rapid depletion of foreign exchange reserves, sharply rising inflation, and a sudden change of government in April 2022 with a strong possibility of snap elections in the next year. Recent deregulation of domestic fuel and electricity prices as part of IMF bailout conditions further elevate the risk of social and labour unrest in the next year.

While Bangladesh and Laos are vulnerable, they have mitigating factors that set them apart from Sri Lanka, Pakistan and Nepal. Bangladesh has strong foreign exchange reserves allowing it to better weather economic pressures and reduces the risk of mass anti-government unrest. In Laos, rising living costs and fuel shortages have led to anger against the government on social media but large-scale anti-government protests are unlikely due to the Lao People's Revolutionary Party's restrictive security regime.

Other countries in APAC are likely to be more resilient to government instability as rising inflation and living costs drive unrest. Protests for example are particularly likely in Indonesia, India, Thailand and the Philippines although we do not expect changes in government leaderships as a result. Labour unrest is also likely to be significant in South Korea, India, and Bangladesh, driving supply chain risks in their garments and electronics sectors, as well as to ports and domestic cargo industries. 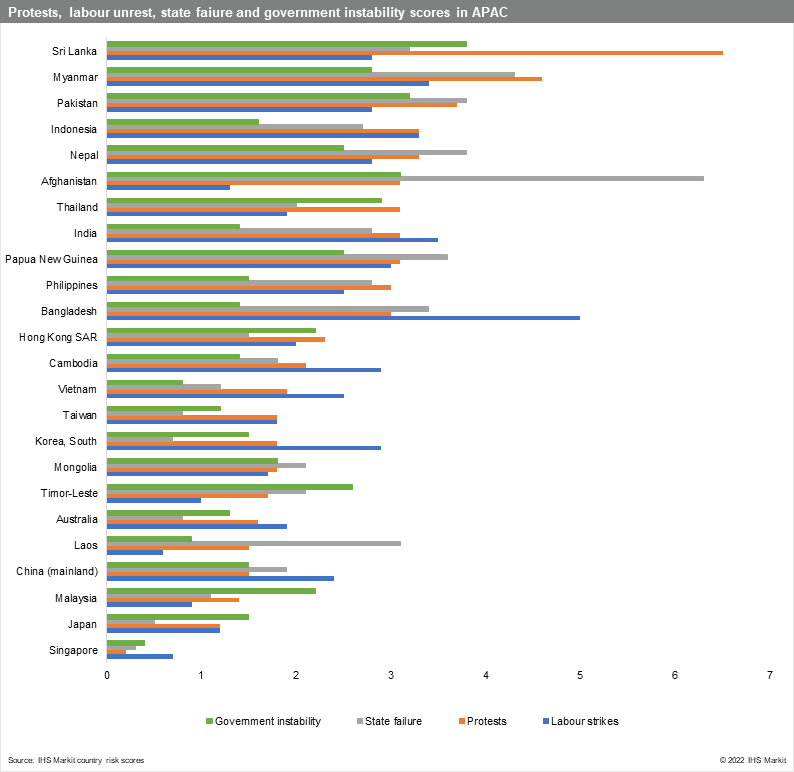