Sprint and T-Mobile combined: The implications of a merger

The rumored and much-discussed merger between Sprint and T-Mobile would have myriad ramifications for both consumers and mobile carriers alike, creating a company with nearly 130 million subscriptions-a similar scale to that of market leaders AT&T and Verizon. Combined, Sprint and T-Mobile would have the scale and resources to provide stronger network competition to the more extensive networks of AT&T and Verizon. Consumers in both rural and urban areas should experience improved coverage and better mobile performance when the deal is finalized and the network operations are integrated. However, the deal is not as straightforward as it may sound.

While both carriers operate 4G LTE networks, Sprint and T-Mobile operate different 3G network technologies and own very different spectrum holdings. Combining the network assets and spectrum allotments of each network will likely prove a complex and time-consuming undertaking. That could potentially undercut the momentum that T-Mobile has managed to build since the failure of a merger with AT&T in 2011 which handed T-Mobile a breakup fee worth $4 billion, including $3 billion in cash, a spectrum access deal worth an additional $1 billion, and a seven-year roaming agreement. Since then, T-Mobile has more than doubled its subscriber base in a market that has grown by just 25%. Despite often drastic (and expensive) marketing moves, Sprint, acquired by Japanese operator Softbank in 2013 with an intent to merge with T-Mobile, has seen subscription growth stagnate alongside significant declines to revenues and losses in profitability.

Sprint and T-Mobile users in rural areas may benefit the most from the combined network through improved coverage and the resources to invest in the increasingly dense networks that will support 5G. Read on to see what RootMetrics, an IHS Markit company, believes this merger would mean for consumers.

With Sprint using CDMA for their 3G network and T-Mobile using the GSM/UMTS standard, Sprint and T-Mobile currently sell and support specific devices that work on their own networks, including iPhones in which chipset providers differ (Intel vs. Qualcomm, for example) depending on the network. Current Sprint devices will not have the same experience as a current T-Mobile device on the combined network, and vice versa. That may lead to increased churn as users find that service degrades on the less favored network (likely to be Sprint's CDMA) as the networks are integrated.

In order for users to take full advantage of the merged network's services, once the merger is complete and a network integration plan is clear, OEMs such as Samsung, LG, Apple, and others must begin producing devices that support the features and frequencies of the combined Sprint and T-Mobile network. It's important to note that many current Sprint and T-Mobile devices will still be able to take advantage of certain features of the combined network, and users will not necessarily need a new device.

Both carriers have strong coverage in urban areas and metropolitan markets across the US. Indeed, neither Sprint nor T-Mobile exhibited any significant domestic roaming during RootMetrics testing across the 125 most populated metro areas in the US in the first half of 2017.

In terms of providing coverage outside of metropolitan markets, neither carriers' coverage encompasses as wide an area as that of AT&T or Verizon. RootMetrics testing across each of the 50 states (outside of metro areas) observed that Sprint and T-Mobile often roamed on their competitors' networks domestically. During RootMetrics state testing, Sprint roamed on competitor networks approximately 27% of the time, while T-Mobile's network roamed at a rate of 26%. The RootMetrics tests were performed with the most current consumer devices and represented the real-world consumer experience of using data, call, and text services.

Once the merger takes place, RootMetrics expects that the new combined network will directly compete with AT&T and Verizon for coverage in rural areas, rather than roaming on competitors' networks. However, in order for the combined network to compete effectively with AT&T and Verizon, many new towers will need to be deployed utilizing low-band frequencies (600/700/850). See the maps below for a look at how prevalent domestic roaming was for Sprint and T-Mobile during RootMetrics testing of the 50 states in the first half of 2017, as well as for a look at how roaming is affected when the networks of Sprint and T-Mobile are combined. 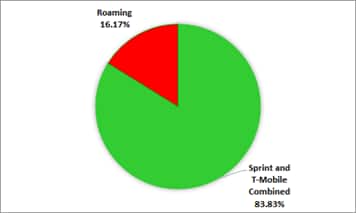 As these roaming maps suggest, the combined Sprint and T-Mobile network will eliminate a large portion of domestic roaming, down to roughly 16%. In some areas, however, new towers will be required in order to provide coverage. It's also worth noting that T-Mobile is currently in the process of deploying its 600 MHz band spectrum widely across the US. The implications of this deployment suggest coverage would increase from 315 million to 321 million on a population basis, but the difference in coverage on an area basis would be more significant.

Sprint is well known for its rich spectrum assets, particularly on the 2.5 GHz TDD spectrum. Sprint is effectively using that spectrum for 3-carrier aggregation (3CA) on its LTE network, which allows high-peak downlink speeds to be achieved. Sprint has also been deploying its 2.5 GHz TDD spectrum for wireless back-haul purposes, which should give Sprint a distinct advantage over other carriers by eliminating reliance on wired networks and reducing backhaul costs. This spectrum, which would have been considered high band in previous generation deployments, is also well suited to future 5G deployments, which are set to be increasingly dense and used with higher spectrum bands. Furthermore, Sprint owns frequencies in the 850 MHz and 1900 MHz FDD bands, which help with both in-building and rural coverage.

T-Mobile, meanwhile, currently has spectrum holdings in the 600 MHz, 700 MHz, 1900 MHz, and AWS bands. And as noted above, T-Mobile is currently in the initial stages of deploying its 600 MHz spectrum across the US.

In short, the combined networks' spectrum assets will be both deep (large bandwidth) and varied (low and high bands) and should be able to effectively compete with AT&T's and Verizon's spectrum assets for use with 4G LTE, 5G, and IoT.

Integrating networks has not always gone smoothly. For perspective, consider the <span/>Cingular Wireless and AT&T Wireless Services (AWS) merger that occurred in late 2004. That merger was much simpler than what we expect to see between Sprint and T-Mobile. Cingular and AT&T had similar network infrastructures; both were GSM-based, but integrating the two networks ultimately took several months to complete.

Sprint and T-Mobile each have much more complicated networks today compared with the seemingly "simple" Cingular and AT&T Wireless networks of 2004. As one example of the differences between Sprint and T-Mobile, consider that T-Mobile supports VoLTE while Sprint carries its voice traffic on 1xRTT. Moreover, T-Mobile is GSM-based and Sprint is CDMA-based, and the two carriers do not always share the same infrastructure vendors in the same regions of the country.

In urban and suburban areas, both carriers' coverage has significant overlap. The integration of coverage, including tower-by-tower decisions on which towers to keep or which to forfeit, will be a lengthy process that will likely span several months. Furthermore, both companies have different approaches to in-building, small cells, and IoT coverage that must be aligned.

On the other hand, earlier mergers have provided valuable lessons that Sprint and T-Mobile might draw upon. Learning from the example of Canadian and Korean operators as they prepared their networks for 4G, Sprint and T-Mobile might decide to shut down EV-DO, leave voice on RTT for a while if necessary, implement HSPA in the EV-DO band and then bridge it to LTE. This would simplify the integration process.

There is also the possibility that both networks are simply maintained separately. Both T-Mobile and Softbank have experience running disparate networks and could choose that same path after the merger. For instance, in Japan Softbank runs three brands with three different spectrum assets: Softbank Mobile uses W-CDMA and FD-LTE, WCP runs on TD-LTE, and Y!Mobile takes advantage of both TD-LTE and FD-LTE.

RootMetrics expects that the new company and combined network would be able to compete more effectively with Verizon and AT&T on several fronts, including delivering better coverage in rural areas than either Sprint or T-Mobile alone, improved performance in both urban and rural environments, strong nationwide IoT coverage, and a more seamless deployment of 5G technology.