This article is from our food commodities coverage dated 02/07/20.

The future of the dairy industry after the Covid-19 pandemic peak period still continues to be wrapped in mystery. IHS Markit has learned about yet another possible scenario for the European lactosphere, described by an unlikely recovery in the foodservice industry and a potential product oversupply that will weigh down commodity prices in the next three to six months.

Christophe Lafougere, managing director at French agribusiness consultancy Gira, explained at the Global Dairy Outlook webinar last week, that there are a certain number of factors to take into consideration when forecasting what is to happen to the dairy industry in the short to medium-term.

Among them is a second wave of infection, medical treatment, vaccine and further movement restrictions. Should these uncertainties remain and continue disrupting the market, they need to be taken into consideration when making the forecast. These uncertainties are still there, and they will not disappear.

At the end of 2019, all indicators for the EU dairy industry were in the green: the bloc had good farmgate milk prices, good margins at farm level, cow numbers were up in some countries and exports were rising.

In terms of products, there are a few surprises - especially the fact that rumours suggested most surplus milk in Q2 should have been directed into the production of shelf-stable products, like butter and SMP - but it did not happen.

Instead, Europe has put more milk into cheese up to now with producers tending to think that the SMP price will not hold in the next three to six months and that it's better not to block this powder into the warehouse. There is not a lot of SMP being given away through the Private Storage Aid scheme, only 14,000 tonnes, which further proves that more milk was directed into cheese production, which is a higher added value product and needs time to mature.

Normally, 33% of the total EU cheese supply goes to foodservice, but with the sector practically defunct during Q2, there was a surge of product redirection into retail. This resulted in as much as 30% more cheese sales in some countries. Although the estimated loss in cheese production throughout the year is around 925,000 tonnes, gains from cheese diversification into retail is estimated at 750,000 tonnes.

In solid dairy fat, there was no gap in supply and demand during peak Covid-19 lockdown period. Thanks to the rise in butter purchases for home baking, in Q2, the loss in the foodservice sector has been compensated by the retail sector. Production should grow by 3%, which will lead to (higher?) stocks in H2 due to the fact that less milk will start going into cheese, as the market will be coming back to more or less normal functioning.

Gira points out that the bloc will see the creation of SMP stocks in H2 - at the time the market will start to come back to normal and milk will finally start going into the production of SMP and butter instead of cheese. Stocks will not be as significant as in 2017, so intervention buying will not be happening this year.

Product overproduction in the remainder of the year (Q2-Q4) should mainly affect SMP, with the potential oversupply reaching 150,000-200,000 tonnes. Butter oversupply is pegged by Gira at 70,000 tonnes, while cheese oversupply should average 80,000-90,000 tonnes.

Gira points out that the foodservice sector will not stage a recovery in 2020 or even by the end of 2021. With an estimated 50% drop in foodservice sales in the second quarter of the year - which happened to be the period during which most countries were put into lockdown - a further 37% and 29% declines are expected for Q3 and Q4 respectively. This slight recovery in foodservice sales will not be sufficient to offset the dips seen in the first half of the year.

There are a few key explanations. Firstly, with restaurants opening up, there is reduced seating capacity in order to comply with recommended social distancing rules. Gira estimates that seating capacity should drop by around 20-30%, which means less people can eat at the same time. Secondly, the fear of the consumers of coming back to normal remains a major factor that will slow down the sector's recovery.

The last big problem for Europe is reduced tourism. Major airlines and trainlines have significantly cut traffic from the end of March, when lockdown rules were first enforced. A slight revival is expected, but only limited to national and local tourism, as well as within certain travel bubbles set up by multiple groups of countries. 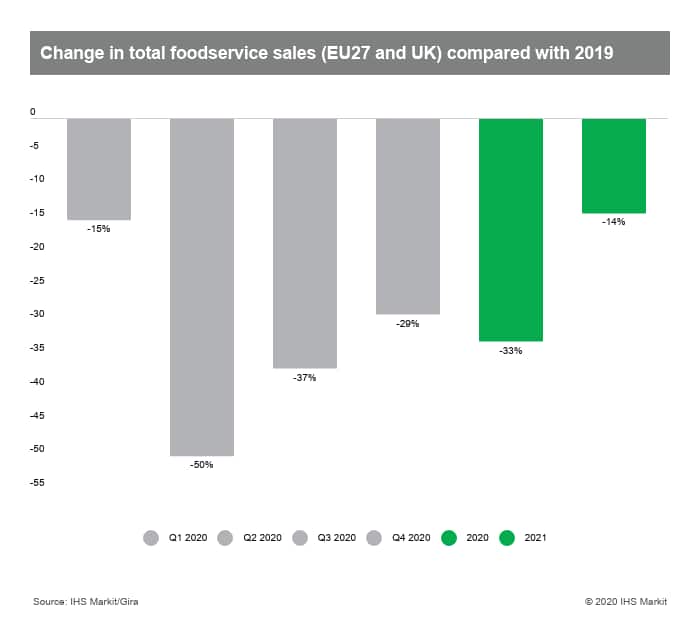 Gira highlights that after a period of surging prices, the market is now back to a practical normality compared to 2017 and 2018.

With product oversupply and foodservice unlikely to recover, Lafougere said that prices for Europe's main commodities are to remain suppressed. SMP will come down from the current levels of around EUR2,100/tonne to EUR2,000-1,700/tonne. Concerning butter, the average price will decline to slightly below EUR3,000/tonne, as buyers are postponing their purchases of butter, which are expected to have a surge in 2021.