This report centers around the dividend index points (DIPs) projection for the S&P/ASX 200 over the period between February and June 2020. March is projected to generate the highest index points (58.51), followed by May (33.78). Most of our estimates have a medium confidence rank, although a handful are flagged with low confidence due to reasons such as changes in dividend policy or a lack of consistency in terms of payout practice. 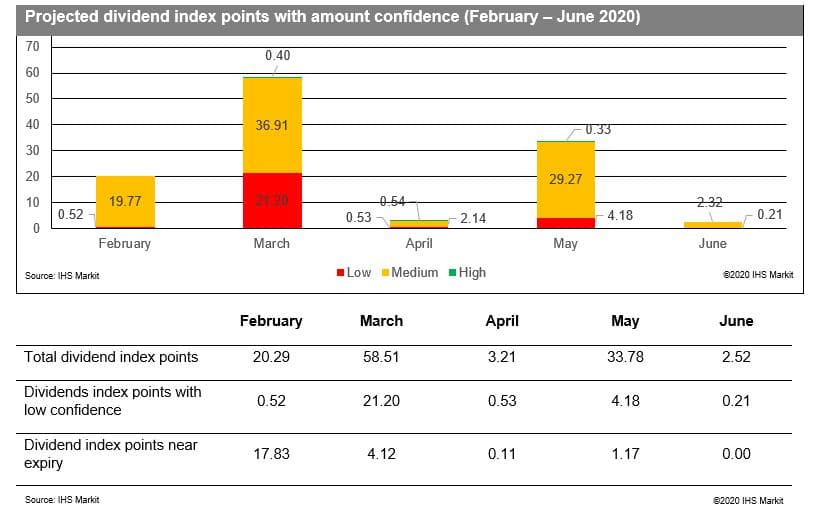 We have incorporated notable events into our projections, such as:

1. Announcement from RBNZ on tougher capital requirements.
Upcoming dividends from the big four banks are not expected to be affected by RBNZ's latest announcement, which requires these banking giants to hold more capital in New Zealand. The central bank has made several concessions to its ruling, lengthening the time period to comply and broadening the types of instruments that will qualify towards the new requirement. This alleviates any pressure on dividends over the short term as they now have more time and more ways to meet the shortfall.

2. Bushfires in Australia
Super Retail Group signaled that its earnings before interest and tax could fall by at least 7.5% from the year before in the first half. As the company operates a performance-linked dividend policy, we are now expecting the company to cut its dividends for the first time in recent years. We are however, not expecting a massive cut from the insurance majors such as Insurance Australia Group (IAG) and Suncorp Group as the claim costs relating to the bushfires are not as severe as the costs incurred by the hailstorms that occurred in Sydney in late 2018. According to its filing on January 24th, IAG announced that its results for H1 FY20 are in line with management's expectation, and its underlying insurance margin is expected to be higher than the year before.

3. Volatility in commodity prices
The elevated gold price seen in the second half of 2019 is likely to benefit some gold miners such as Evolution Mining and Saracen Mineral. We are expecting higher payouts from the big three iron ore miners, Rio Tinto, BHP Limited and Fortescue. The coal miners, however are unlikely to be generous with their dividends due to the fall in coal prices in the second half of 2019.

Allocation to private credit markets in Australia, and APAC, is increasing. Firms lean heavily on digitization but… https://t.co/PDpV0RYVj3

Despite years of structural softening globally, #inflation may soon pose significant risks that could be enduring.… https://t.co/LpbAyWWOiz