The Case-Shiller prices indexes continue to march forward at rates that while not worrisome yet, are unsustainable. Prices are growing in the 5% to 10% range in most places - not too hot, not too cold. Scarcity, not easy credit, is driving prices upward (that's good news). According to standard economic theory, higher prices ought to lead to new construction, however this has not happened yet. Seventeen cities experienced monthly price increases in July. Seasonally adjusted monthly price changes ranged from a 0.8% increase in Los Angeles and San Francisco and a 0.1% increase in Detroit, Dallas, and Minneapolis, to a decline of 0.2% in Chicago. Twelve cities experienced faster price growth in the year ending in July rather than in June. Year on year, national home prices accelerated again, as they did in June, and the composite indexes also accelerated in July. While prices are still rising, the increases are moderating in some cities.

Compared with last July, all cities experienced positive price growth led by Seattle, Portland, and Las Vegas, all more than 7% higher than a year earlier, with Seattle far outpacing second and third place with 13.5%. The cities with the slowest yearly price growth include Washington, New York, Cleveland, and Chicago, all ahead by less than 4%. Prices in Atlanta, Boston, Charlotte, Dallas, Denver, Portland, Seattle, and San Francisco hit all-time highs in July on a not-seasonally-adjusted basis. Homes in three cities are still experiencing price levels 20% or more below former highs (Las Vegas, Phoenix, and Miami).

The national index expanded 0.5% month on month (m/m) on a seasonally adjusted basis in July, higher than the six-month average of 0.39%. Median and average existing home prices have marched upward in year-over-year terms for 66 straight months. The months' supply of existing single-family homes, 4.2 months, has remained near the lowest level ever recorded (data goes back to 1982), but this is hardly news. Inventories have been near record lows, and single-family inventories have retreated from their year-earlier level for 27 consecutive months. Despite the federal funds rate increase, mortgage commitment rates remain below 4%, supporting affordability that is deteriorating due to continued price increases that exceed wage growth. In the absence of significant inventory expansion, we expect prices to continue to advance as rebuilding begins across Florida and Texas in the wake of Hurricanes Harvey and Irma and as the Fed is expected to raise the federal funds rate again in December, pushing mortgage rates upward. 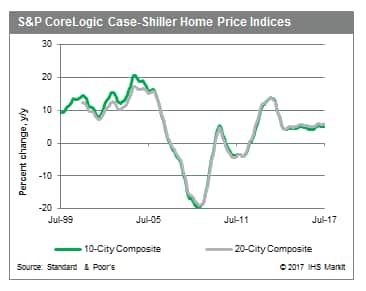