Entering the third quarter of 2020, the Southeast Asia region power market is being tested once more by a second wave of COVID-19. Although easing measures were implemented not long ago in the second quarter, several countries have had to reimpose partial lockdown in the third quarter to prevent the spread of the virus. The staggered hike in new COVID-19 cases has also slowed the already sluggish power demand in most of Southeast Asian markets.

Based on the power market data, a fluctuated trend of power demand was observed in Southeast Asian countries by third quarter 2020. The following figure illustrates the 2019-20 year-on-year (y/y) monthly power demand growth rate in Vietnam, Myanmar, Malaysia, Thailand, and Singapore. The growth in power demand was observed in Vietnam and Myanmar, with a y/y increment between 3% and 9%. However, y/y power demand dropped between 6% and 0.4% across Singapore, Malaysia, and Thailand. The variation in power demand growth reflected the changes in Southeast Asian power markets that were associated with the surge in COVID-19 cases. 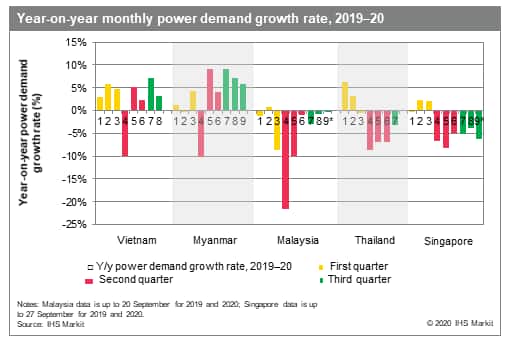 Vietnam's power demand seemed to have recovered from July, when it recorded a y/y growth of 7.2%. However, Vietnam was hit by a second wave, with a surge in COVID-19 cases in early August 2020. This was followed by the enforcement of partial lockdown in the country. The growth of power demand in August dropped to 3.2%, owing to the closure of the industrial area. September's power demand has yet to be released, but y/y growth rate is expected to be slightly higher than August.

Myanmar recorded a y/y growth between 5.9% and 9.1% in the third quarter, which is much higher than the growth during pre-COVID-19 lockdown periods. This is due to the manufacturing sectors moving into expansionary territory in July and peaking in the middle of August. The country was then hit by a second wave of COVID-19 in early September, with an ensuing partial lockdown. This slowed down industrial activities and stalled power demand.

Malaysia recovered slightly in power demand compared with the second quarter, which had a decline between 1% and 21.6%. Y/y growth in July fell by 3%. Additionally, power demand dropped by an insignificant 0.9% y/y in August, and 0.4% for the following month's y/y power demand growth data that is cut off by 20 September. The power demand recovery indicated the success of the fiscal stimulus package launched by the government in driving the recovery of economic activities. To date, five economic stimulus packages totaling 305 billion Malaysian ringgit (approximately $73.5 billion) have been unveiled by Malaysian government, covering tax relief, employment-related measures, and economic stimulus initiatives to counter the effects of the pandemic. However, Malaysia was hit by a new wave of COVID-19 in mid-September and power demand is likely to drop further in late September.

Thailand's power demand decreased at a slower pace in July with a drop of 3.3% y/y in power demand growth. Power demand seemed to fall more steadily than in the previous quarter, when it declined between 6.8% and 8.7%. The economic contraction in July 2020 was less than second quarter 2020 because of the reopening of business activities; this suggests a slow recovery momentum in power demand. August and September power market data were still unavailable, but they are estimated to be stay below pre-COVID-19 lockdown levels owing to the country's poor economic outlook.

YTD commissioning of new thermal plants decreased sharply as compared with 2019 in Southeast Asian regions, except for Myanmar and Vietnam (see the following figure). Comparing the total installed capacity of new commissioning plants, the new thermal power plants that commissioned in January-September 2020 was 3.8 GW, recording only one-third of the 2019 annual capacity addition. 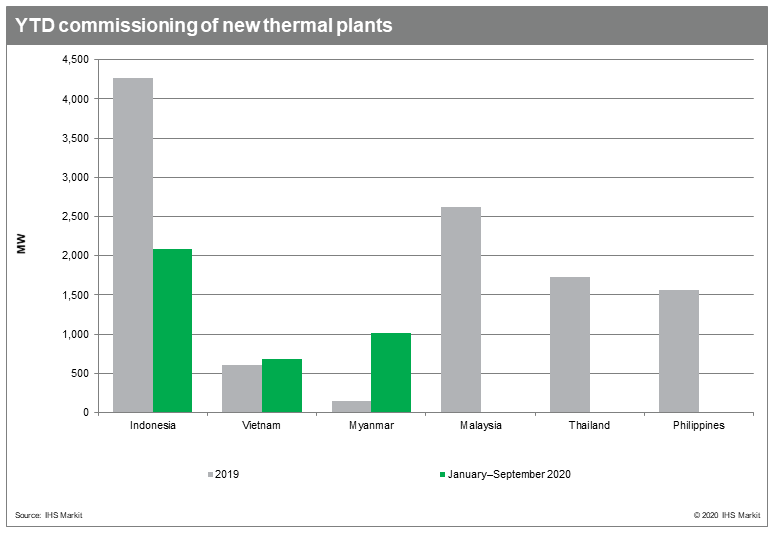 Indonesia remained the biggest thermal market, with 1,131 MW of subcritical coal-fired power plants and 952 MW of gas-fired power plants reaching commercial operation date (COD). Despite Vietnam maintaining a large project pipeline, only one project came online—688 MW Duyen Hai 3 extension that was an originally planned COD of 2018. Surprisingly, Myanmar was able to fast-track 1 GW of gas-fired power plants in a very challenging construction deadline designated in an emergency tender. As for Malaysia, Thailand, and the Philippines, no new thermal plants came online between January and September. The reduction in plant commissioning is owing to the lower country targets, as well as projects delayed by the COVID-19 pandemic. For example, the 668 MW Dinginin power station in central Luzon, Philippines, originally scheduled to go online by second half 2020, was delayed as the travel ban stopped Chinese engineers from being present on-site to perform plant testing and commissioning process.

The power market was hit again by the second wave of COVID-19 and the resulting plunge is well seen for most Southeast Asian countries. Vietnam and Myanmar were an exception, where demand recovered in the third quarter; however, the outlook for these countries in the fourth quarter is still cloudy. Additionally, COVID-19 likely has delayed the construction of many thermal power plants in the region and more measures need to be quickly implemented to cope with the damage caused by the pandemic.

Choon Gek Khoo is a research analyst with the Gas, Power and Energy Futures team at IHS Markit based in Penang, Malaysia.

Cecillia Zheng is an associate director with the Gas, Power, and Energy Futures team at IHS Markit.