Southeast Asia (SEA) was regarded as a "slow starter" in the energy transition but has accelerated the decarbonization path, with most SEA countries developing their own road maps to achieve net-zero emissions between 2050 and 2065[1].

Renewable deployment and coal phase-out are the two most common decarbonization pathways for SEA. However, the green shift in SEA hits roadblocks, as the renewable expansion creates staggering challenges related to power supply reliability to prevent intermittency problems, as well as the accessibility of affordable pricing structures involving grid enhancement. The region's new actions on pushing energy transition to address the energy dilemma are discussed in the recently published customer report: " Southeast Asia power and renewable market briefing for the second quarter of 2022". (This report available for service customers only.)

Various efforts have been made to push renewable expansion. Singapore's first power import project begins through the Laos DPR-Thailand-Malaysia-Singapore Power Integration project; the Philippines's inaugural green energy auction awarded 76% of the capacity to solar; Vietnam's latest PDP8 draft appears to center on gas and wind; and the Philippines's newly elected president likely will favor renewables and nuclear power amid the energy transition. As the increasing renewable share has posed challenges to the power grid system, the SEA countries gradually opened the grid sector to private and foreign investors to accommodate renewables expansion.

However, the region is heavily reliant on coal to generate electricity, with coal share in power generation ranging between 17% and 61% across major SEA markets (Figure below). The region is facing a power shortage as power demand continues to expand, and the incremental power demand is expected to be partially met by conventional fossil fuel generation. As Thailand delayed the retirement of Mae Moh coal plants, Vietnam put strong coal capacity in the PDP draft, and Indonesia's draft renewable energy bill proposed to include coal-based energy as "new energy" source. All these movements raise the question of the fate of coal-fired power plants—whether coal is still holding the ground amid the energy transition or is it at the last gasp before collapsing? 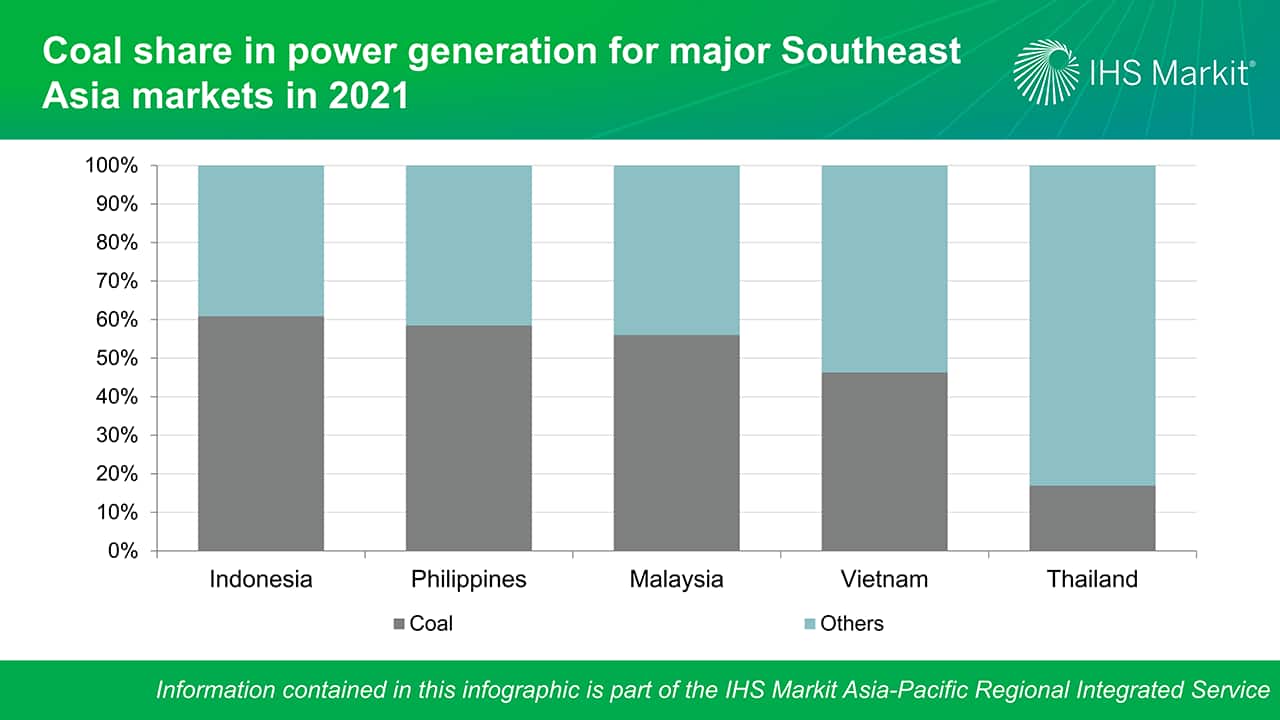 Besides, it was noted that nuclear power is now being considered as one of the clean energy transition options in the region. The heavily coal-reliant countries—the Philippines, Indonesia, and Vietnam—all float their prospects of nuclear power development in the most recent announcements during the second quarter of 2022. This prompted the market to speculate on whether is nuclear power making a comeback?

Last but not least, the renewable expansion and the perspectives of coal and nuclear will continue to be the major considerations in addressing the SEA region's energy dilemma.

Learn more about our research and insight into the APAC energy market through our Asia Pacific Regional Integrated Service.

[1] Except for the Philippines, which has not committed a net-zero target.