Development to encourage hydrogen use has just started in Southeast Asia. A clean energy transition is underway that focuses on shifting coal dominant regions toward low-carbon fuels. Developed countries like Singapore and resource-rich Malaysia are the front-runners in laying out hydrogen pathways, attracting companies that are keen to embark on pilot projects. While IHS Markit expects the short-to-medium term deployment of hydrogen to be small, the initial steps taken have the potential to transform into commercial leaps. 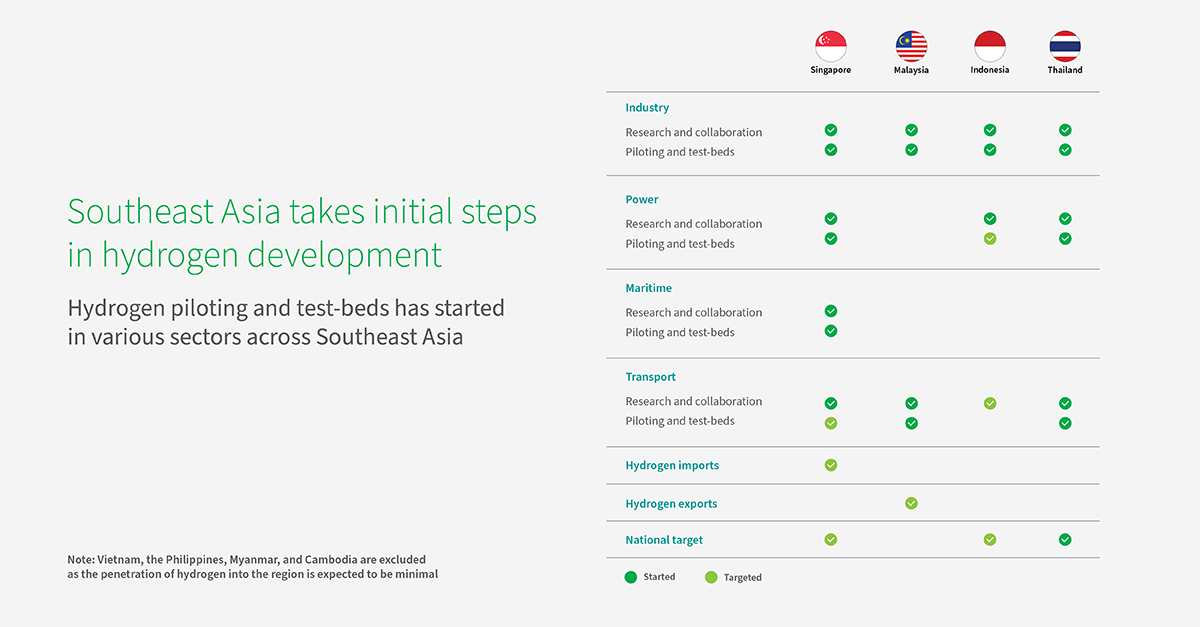 Singapore: In 2020, Singapore released a long-term low emission strategy plan, which sees emerging low-carbon alternatives such as hydrogen in Singapore's future energy sector. Research and collaboration are encouraged by the government, which has provided funding of 49 million Singapore dollars. To date, Singapore has also signed agreements with Australia on low-emissions technologies and low-carbon green hydrogen with Chile and New Zealand.

Indonesia: According to the Indonesia Hydrogen Energy Outlook meeting held on 19 February 2021, hydrogen developments play a role in reducing the country's carbon emissions. Companies are also beginning to embark on pilot projects. Pertamina is piloting a 37 metric ton per year hydrogen plant integrated with its geothermal plant in Lampung, the southern tip of Sumatra. The project is targeted to start in 2021. Furthermore, HDF Energy proposed a hybrid renewable hydrogen power plant in East Nusa Tenggara Province in Sumba Island, Indonesia. The project entails 7-8 MW of solar capacity to power the grid during the day and 1-2 MW from hydrogen storage at night. While the project is still in its preliminary stage, the developer has support from the Minister of National Development Planning and the local government.

Malaysia: Within Southeast Asia, Sarawak has the best potential for large-scale hydrogen production. It possesses rich hydropower resources and is home to numerous gas fields that have fueled the Bintulu liquefaction plant for decades. This, coupled with low power demand in the state, has attracted corporations to its low-cost power that is ideal for blue and green hydrogen production.

In Sarawak, the current retail electricity price is at US$67/MWh. For bulk electricity customers, this could be even lower. At such levels, it is attractive for players looking at green hydrogen production. Our estimates of liquid hydrogen exports to Japan ranges from US$4.3/kg to US$5.0/kg (US$32-38/MMBtu).