The regional PV market has picked up in the last two years, thanks to the impressive growth of Vietnam in 2020. Regional policy, combined with an increasing demand for renewable power in the manufacturing industry, will lead to 27 GW of new PV installations over the next five years, as per our latest report on Southeast Asia. PV capacity addition in these countries are attractive FiTs, net energy metering, tariff-based auction mechanism, and other policy support and incentives. 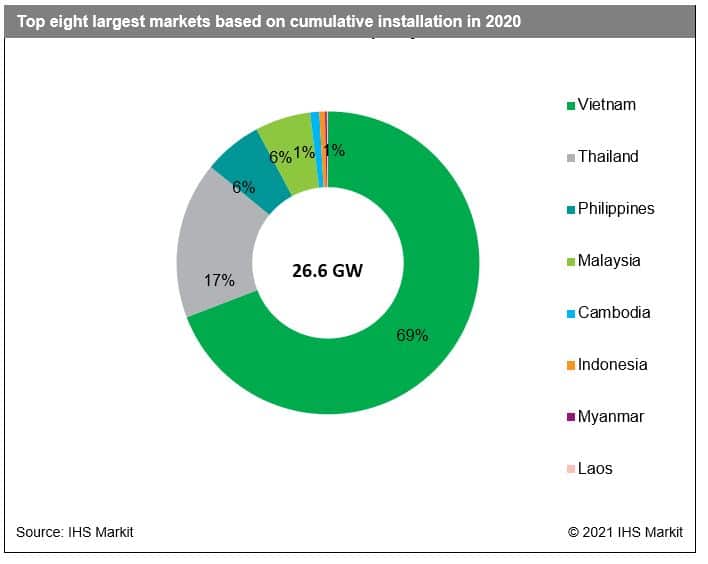 Of the eight largest PV markets in the region, at the end of 2020, Vietnam, Thailand, Philippines, and Malaysia had installed 98% of the operating PV capacity. Vietnam was the only country that steadily installed PV systems throughout 2020, despite the ongoing COVID-19 crisis. About 76% of the installations in Vietnam came from rooftop and remaining 24% was covered by ground mount under the feed-in tariff (FIT) 2 regime. After having been major ground-mount PV markets over the past decade, the Thailand and Philippines markets are currently mainly driven by rooftop installations up to 5 MW in size. In Malaysia, the large-Scale Solar (LSS) projects have contributed to recent growth beyond rooftop systems. Emerging markets, Cambodia and Indonesia have to date been PV markets with sporadic large ground-mount installations.

PV activity in Southeast Asia is mostly dominated by Asian developers, in most cases local companies that are active in a specific market. In Philippines, Solar Philippines is one of the developers with the highest numbers of project pipeline across Southeast Asia. For Vietnam market, Xuan Thien Group holds the second position with 1.14 GW of completed projects and another 597 MW of planned projects. Trungnam Group is competing with Xuan Thien Group by completing 1.06 GW of projects as of 2020. In Thailand, Superblock is leading, followed by Energy Absolute and SPCG, in terms of completed projects. Unlike other Southeast Asian countries, Malaysia has a mix of international and national developers. During the LSS3 PV tender, Malaysia awarded most of the projects to international developers, whichopened the market for large-scale PV development in the country. 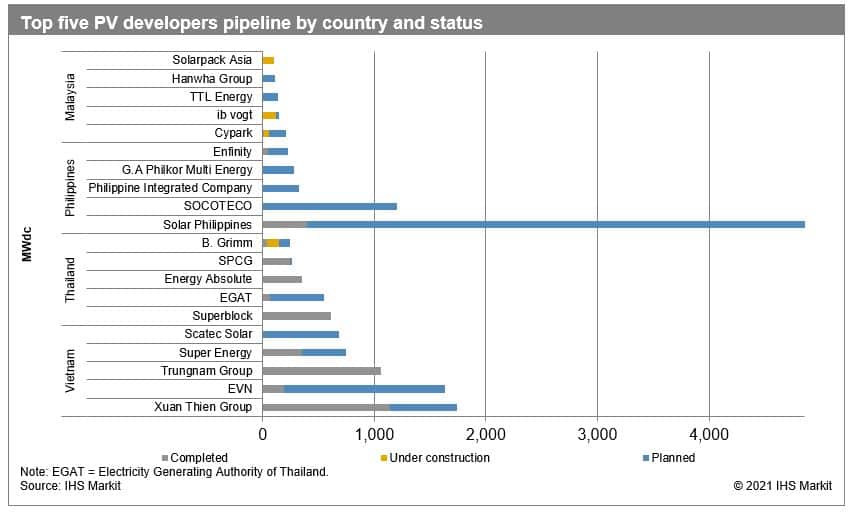 Vietnam PV construction activity gained its pace in 2020, wherein rooftop PV significantly jumped with 9.2 GW of installations. However, PV installation in 2021 is going to slow down unless a new FIT for the rooftop and auction scheme for ground-mounted projects is approved by the government. As per the proposed draft version of National Power Development Planning (PDP) VIII, 9.1 GW of ground-mounted PV projects are under the planned and pre-planning stages. Out of 9.1 GW, 6.3 GW is targeted to be completed by 2021‒25 and 2.8 GW by 2026‒30. These projects are planned to come under direct DPPA with 400‒1,000 MW capacity and the PV auction scheme. PDP VIII also mentions an 18.6 GW PV target by 2030, which was already achieved by 2020. However, the target is mostly likely to be revised in the final approved version.

Thailand PV installation activity started to pick up from 2019 and was again hit by the COVID-19 crisis in 2020. As per government data, there were no ground-mounted installations in 2020. However, installation in the C&I sector continued without much interruption. IHS Markit projects steady growth in the C&I segment throughout the forecast period. The C&I sectors are mainly built under the capex with the self-consumption model, wherein customers do not export electricity to the grid. This model is widely accepted by industries across Thailand.

Malaysia PV market continues to be driven by utility-scale projects under the LSS program. With the exception of 2020, the government has awarded PV tenders yearly since 2017. As of 2021, the upper project size limit has been raised to 100 MW. The LSS4 PV tender in 2021 awarded 823 MWac of PV capacity, with projects to be installed in 2023 and 2024. The first tender, LSS1, awarded 450 MWac, followed by 563 MWac in LSS2 and 490 MWac in LSS3. While LSS1 projects have been fully commissioned, 311 MWac of LSS2 projects are pending completion in 2021 and 2022. As per the government plan, LSS3 projects were due to come online in 2021, but because of COVID-19, the schedule is now set to the end of 2022 and early 2023. The strong oversubscription of the tenders indicates that the capacities of future LSS tenders are likely to remain stable or to be increased.

Philippines rooftop market is doing increasingly well thanks to the high electricity tariffs in the commercial segment. Rooftop owners with available space are actively seeking to to install C&I PV systems. Captive PV systems for direct consumption at shopping malls, educational institutions, cold storage, and factories are mushrooming as permits are easy to obtain. The Philippines PV market is a clear example of a market driven by the competitiveness of PV, without the need for explicit policy support.

Myanmar's ongoing political crisis and military rule, has created great uncertainty around the 1 GW of PV projects that were awarded in 2020. Most of these projects were won by Chinese developers including Sungrow Renewables and China Machinery Engineering Corp (CMEC), at an average tariff range of US$0.0422/kWh, with the original project completion deadline on 9 March 2021. However, with the current situation, developers are reconsidering their projects and may pull out. Project funding is also not available for the developers, as most of the financing entities are not ready to provide loans. At the moment we remain cautious on the Myanmar PV market.

Laos relies on hydropower and coal-fired power plants, with a great share of electricity being exported. However, as electricity from hydropower declines in the summer, the government ends up importing electricity. To diversify the electricity mix, the government has started allotting PV projects, such as the 76 MW PPA between nValid Precision Engineering Pte Ltd and Electricite du Laos (EDL), or the intent of Wealth Power Group to build 580 MW, both announced in 2020.

Cambodia's government has to date installed 260 MW of PV capacity, mainly in ground-mount unsolicited installations outside the auction scheme. Since 2019, the government has been working on a 100 MW auction scheme in collaboration with ADB. In 2019, the government awarded 60 MW capacity to Prime Road Alternative Company Limited, at US$0.3877/kWh. The project is expected to be completed by the end of 2021. Another 40 MW of capacity is under the second stage of the tendering process. Apart from the auction scheme, 455 MW of unsolicited PV are under different stages of development, mainly very early stage.

Indonesia's PV market is dominated by 125 MW of ground-mount installations. The government has a target of 6.5 GW PV capacity by 2025 and 45 GW by 2050. As per our project tracking, Indonesia has 841 MW of PV projects in the pipeline, under different stages of development. Most projects are expected to be realized during the forecast period, including174 MW of floating projects. State-owned electricity utility company Perusahaan Listrik Negara (PT PLN) is also working on a PV auction mechanism, and IPPs have been invited to enroll in the scheme.

The PV market in Southeast Asia covers the full range of opportunities, from large-scale auctions to private C&I projects. At the same time, regulatory uncertainty elevates the risk for investors. Despite the uncertainty, activity is elevated with more and more developers and suppliers seeking to capture a share of the 27 GW that we forecast will be added through 2025.

For more information on our solar technology coverage, part of our Global Clean Energy Technology service, click here, or sign up for free access to selected clean energy technology research, analysis, and insights on the Climate & Sustainability Hub.