The South Korean economy closed the 2021 year on a strong note, with GDP up 4.1% year-on-year (y/y) in the fourth quarter of 2021. For calendar year 2021, the South Korean economy grew at 4.0%, helped by strong consumption expenditure combined with surging exports. Merchandise exports reached a record high of USD 645 billion in 2021, rising by 25.8% y/y.

In 2022, sustained economic expansion is expected to continue, at a pace of around 3%. However, the COVID-19 pandemic remains a key risk to the near-term economic outlook. The high level of two-dose COVID-19 vaccination rates and rapid booster rollout in recent months are expected to help containment of the pandemic in 2022. 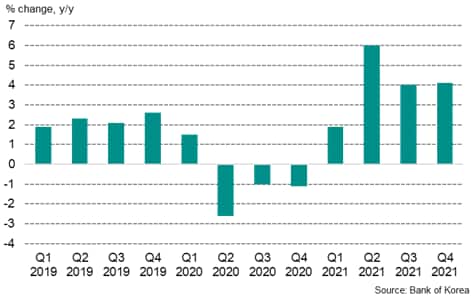 Compared to a year ago, final consumption expenditure rose by 6.8% y/y in the fourth quarter, improving on the 4.1% y/y pace recorded in the second and third quarters. For the 2021 calendar year, final consumption grew by 4.1% y/y, after contracting by 2.4% y/y in 2020.

A key driver for the expansion in manufacturing output during 2021 has been the rebound in manufacturing exports. Stronger economic growth in major economies such as the US, China, EU and UK linked to the rollout of vaccination programs during 2021 helped to boost South Korean new export orders from its key export markets. In the fourth quarter, exports of goods and services rose by 6.1% y/y.

At 52.8 in January 2022, the seasonally adjusted IHS Markit South Korea Manufacturing Purchasing Managers' Index (PMI®) rose from 51.9 in December, signalling a stronger improvement in the health of the manufacturing sector. The stronger reading for the January Manufacturing PMI came as firms reported a renewed rise in output and the sharpest improvement in new order inflows since July.

However, supply chain disruption continued to hold back a stronger recovery in activity and demand in the manufacturing sector. Material shortages and rising input costs were exacerbated by delays in sourcing and receiving inputs, though there were indications that these pressures were starting to ease.

Latest data pointed to a further robust rise in input costs faced by South Korean manufacturers amid sharp rises in raw material prices. Despite this, the increase in cost burdens was the most moderate recorded since September 2021. At the same time, output prices rose further in January, as firms continued to pass higher costs onto clients, albeit at a slower pace. 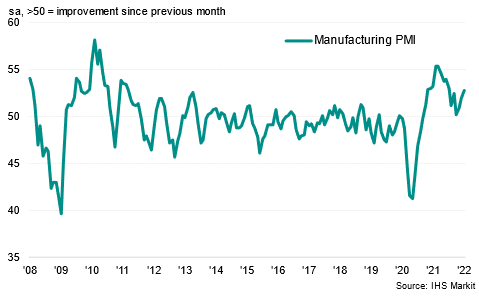 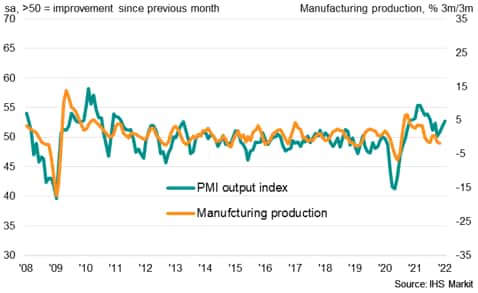 Confronted with rising inflation pressures, The Bank of Korea (BOK) again hiked its policy rate by 25bp to a level of 1.25% at its January Monetary Policy Meeting. This was the third 25bp rate hike since August 2021. Bank of Korea Governor Lee Ju-yeol has signalled that further rate hikes may be needed as the real economy continues to show expansion amidst higher inflation pressures. He also indicated that the pace of US Fed monetary policy tightening would also be a key factor in the BOK's monetary policy stance.

The Monetary Policy Board of the BOK assessed at its January meeting that consumer price inflation will continue to run in the 3% range for a considerable time, exceeding the previous path projected in November. In its Monetary Policy Decision statement in January, the BOK expected headline CPI inflation to remain above the mid-2% level for the 2022 year overall, with core CPI inflation forecast to run considerably above 2% this year.

The decision to tighten monetary policy also reflected BOK concerns about potential risks to financial stability due to the rapidly rising level of household debt as a share of GDP. Property prices have been rising rapidly, notably in Seoul and nearby areas, while household loan growth has accelerated. South Korea's household debt-to-GDP ratio is estimated to have reached 103.8% of GDP by the end of 2021.

The strong rebound in world consumer markets, notably in the US, China and Western Europe, are continuing to drive growth in demand for electronics. This is resulting in buoyant growth in household spending on electronics products as well as products that are intensive users of electronics, notably autos.

The South Korean Ministry of Trade, Industry and Energy (MOTIE) released trade data for 2021 showing that shipments of Korea's information and communications technology (ICT) products in 2021 hit an all-time high of USD 228 billion, up 24 % from 2020. This is the highest level of annual ICT exports recorded since the ICT trade data started to be collected in 1996.

Exports of semiconductors reached USD 129 billion, up 28 % y/y, with exports of memory chips rising by 29 % to reach USD 82 billion.

The headline seasonally adjusted IHS Markit Global Electronics PMI edged up slightly to 56.6 in January 2022, from 56.0 in December 2021, signalling continued strong expansionary conditions for global electronics producers. Latest survey data indicated a further increase in output at global electronics manufacturers at the start of 2022, albeit at a more moderate pace than the 2021 average. Ongoing supply issues for raw materials and other inputs and the recent Delta and Omicron COVID-19 waves have continued to impact on global electronics production.

MOTIE has released statistics showing that monthly ICT exports reached a record high of USD 19.7 billion in January 2022, up 20.7% y/y. 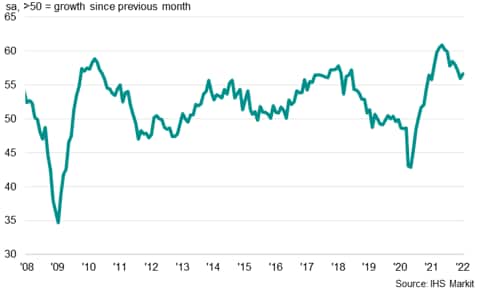 ICT exports to Vietnam in January 2022 rose by 12% % y/y, to USD 3.3 billion. This reflected strong growth in exports of semiconductors, which rose by 30 % y/y, and peripheral devices, which rose by 183 per cent y/y. However mobile phone exports declined by 61 % y/y.

ICT exports to the United States grew by 9 per cent y/y, reaching USD 2.1 billion. This was driven by computers and peripherals, which rose by 91 % y/y.

Korean ICT exports to the European Union (EU) showed buoyant growth, rising by 16 per cent y/y to reach USD 1.1 billion. Exports of semiconductors rose by 9 % y/y, while exports of computers and peripherals were up 84 %.

The outlook for the global electronics industry in 2022 continues to be impacted by lengthy suppliers' delivery times, notably for supply of semiconductors. The seasonally adjusted IHS Markit Global Electronics PMI Suppliers' Delivery Times Index recorded below the neutral 50.0 mark by a substantial margin once again in January, signalling a sharp deterioration in vendor performance. Low stock levels at suppliers, excessively high demand for inputs and logistics issues were mentioned as causes of prolonged delivery times.

The seasonally adjusted IHS Markit Global Electronics PMI Backlogs of Work Index posted above the 50.0 no-change mark once again in January, indicating stretched capacities at global electronics producers. According to anecdotal evidence, production capabilities were constrained by shortages of staff and materials, as well as rising new orders. 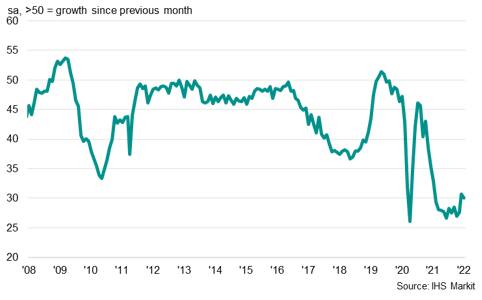 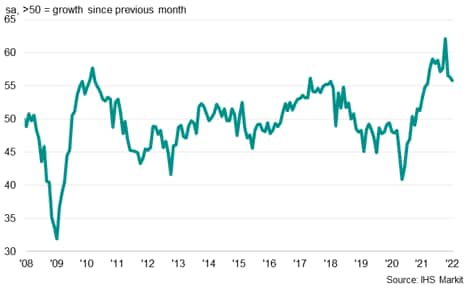 South Korea has made very rapid progress with its COVID-19 vaccination program during the second half of 2021 and early 2022. By mid-February 2022, around 86% of the total population had received two doses. South Korea is also a global leader is booster rollouts, with 57% of the population having received booster shots. Despite the very rapid pace of vaccinations in recent months, downside risks from new COVID-19 waves hitting South Korea or its key global markets such as the US or China remain a key risk to the near-term outlook.

Inflationary pressures also remain an important risk to the outlook for 2022. This reflects a number of factors, including higher input prices, supply chain disruptions and high shipping freight rate costs, which have contributed to rising input price inflation pressures. Consequently, the Bank of Korea has signalled that some further tightening of monetary policy is likely in 2022. Higher policy rates are also expected to help curb risks of a property sector bubble.

An additional challenge is that the recovery of South Korean trade in services is expected to be delayed and protracted, as international travel restrictions in the Asia-Pacific region continuing to constrain any early recovery in exports of tourism and commercial aviation, which are an important component of total services exports.

Over the medium-term outlook, South Korean exports are expected to grow at a rapid pace, helped by the sustained strong growth of intra-regional trade within APAC, as China, India and ASEAN continue to be among the world's fastest-growing emerging markets. South Korea's strong competitive advantage in exporting key electronics products, notably semiconductors and displays, as well as autos and auto parts, are expected to be an important positive factor underpinning export growth.

The rapid growth of South Korean exports is also expected to be strengthened by the APAC regional trade liberalization architecture. This includes the large recent RCEP multilateral trade agreement and major bilateral FTAs. The RCEP trade deal, which South Korea has ratified, entered into effect from 1st January 2022 for the first ten ratifying members, and from 1st February 2022 for South Korea.

South Korea is also actively evaluating the possibility of applying to join the Comprehensive and Progressive Agreement for Trans-Pacific Partnership (CPTPP) trade agreement and has begun unofficial bilateral talks with the CPTPP member nations to prepare for its potential formal membership application. South Korean Finance Minister Hong Nam-ki indicated in December 2021 that South Korea plans to submit its official application to join the CPTPP by April 2022, before the upcoming Presidential election.

A key macroeconomic risk to the South Korean economy over the medium to long-term outlook continues to be from the high level of household debt as a share of disposable income. This has risen to 200% by 2020, the fifth highest amongst all OECD countries. A key factor driving this debt ratio higher has been large mortgage lending flows for residential property purchases. This has fuelled rising property prices and has led to fears of a speculative property bubble. Such a high household debt ratio creates macroeconomic vulnerability to further significant monetary policy tightening in a high inflation scenario.

Managing the energy transition towards renewable energy is also a key policy priority for South Korea. South Korea has already been at the forefront globally in planning initiatives to develop hydrogen as a key future fuel source for domestic power generation.

Among South Korea's greatest economic challenges will be long-term demographic ageing, which will have severe implications for South Korea's economy and society. The number of seniors aged 65 or over has already reached 16.5% of the population and by 2025 is projected to rise to 20% of the population. Meanwhile the working age population (aged 15 to 64) is declining as a share of the total population, from 71.4% in 2021 to a projected 55.7% by 2041.

Consequently, structural reforms to increase the potential growth rate will be a key policy priority over the medium term. These reforms would include policy changes to lift the labour force participation rate, improve services sector productivity, accelerate digitalization and further boost the adoption of industrial automation.