South Korean manufacturing conditions worsened for a fifth consecutive month in September, according to the latest PMI data, putting the manufacturing economy on course for one of its weakest quarters for four years. Other survey indicators showed no signs of any near-term recovery in coming months, with business sentiment well below its long-run average and rising job losses highlighting an increased shift toward cost-cutting. 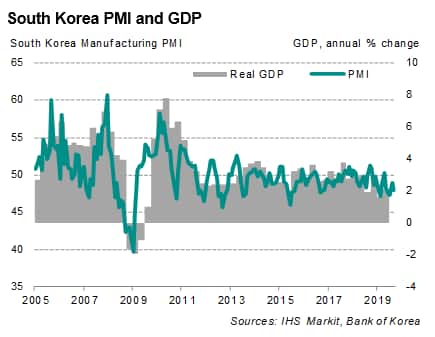 The IHS Markit South Korea manufacturing PMI fell from 49.0 in August to 48.0 in September to signal a fifth successive month of deteriorating operating conditions in the sector. At 48.1, the average PMI for the third quarter is the joint-lowest for just over four years (since the second quarter of 2015).

Production fell for an eleventh straight month and at one of the steepest rates in the current sequence of declines amid a lack of demand. Inflows of new orders shrank further in September despite a rebound in overseas sales. New export orders rose for the first time since July 2018 during September, although the rate of growth was marginal. 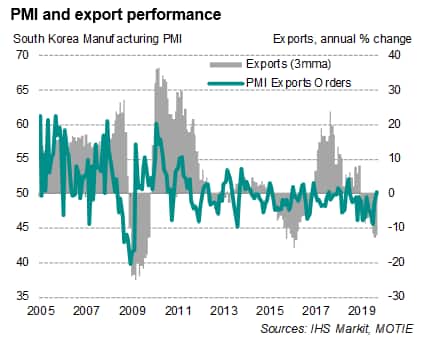 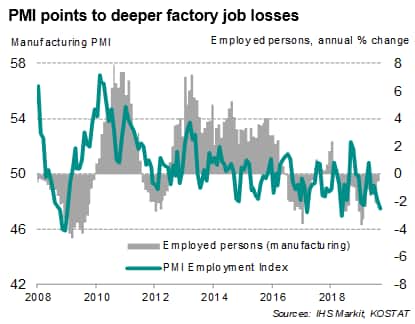 Lower demand saw the decline in the level of backlogs extend into September which, in turn, weighed on hiring. Factor job losses quickened to a rate not seen since May 2018, suggesting that the ongoing decline in net employment in the manufacturing sector will accelerate in September. Anecdotal evidence suggested that layoffs were linked to unfavourable economic conditions as well as cost cutting measures.

The weakening sales trend, alongside trade woes, auto worker strikes and deteriorating global economic environment, meant that firms' expectations about output in a year's time remained well below the historical average. In addition, the ratio of orders to inventory continued to point to further reduction in output in coming months.

The survey data also showed that higher prices for commodities such as oil and nickel, a weaker exchange rate and wage inflation drove input costs higher in September. That said, the rate of inflation remained mild and well below the strong increases seen last year.

The latest PMI therefore points to risks of increasingly sluggish growth in the Korean manufacturing sector and low inflation in coming months, adding pressure on the Bank of Korea to reduce interest rates further at the upcoming policy meeting in October. Recent PMI results remain in territory consistent with dovish monetary policy. 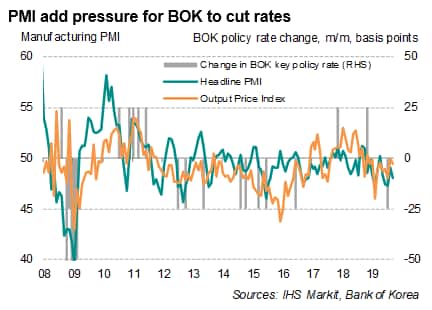