Following the completion of the latest round of IHS's Healthcare Forecast, I think it's worth evaluating the outlook for South Korea in light of the prospect of joining the Trans-Pacific Partnership (TPP). Domestically, the economy is expected to bounce back from slow growth in the first quarter. In healthcare, despite universal healthcare access, the high out-of-pocket medical costs create a burden for South Korean patients, although an improvement trend is projected down the road. Globally, South Korea's prospect of TPP membership is not imminent but continues to be high on the agenda.

As the second most advanced economy in Asia, South Korea takes pride in its healthcare system, which provides universal access ensuring at least basic coverage. However, co-payments for the insured are comparatively high, with reimbursement restrictions increasing. The public share of total health spend is relatively low, reflecting both high co-payments for insured services, which range from 20-50% of total cost, and direct payments at market-determined prices for services that fall outside the insurance safety net.

Based on IHS data, Korea's out-of-pocket per total health expenses in 2013 was the 12 highest among 38 core markets - although this trend will change down the road. 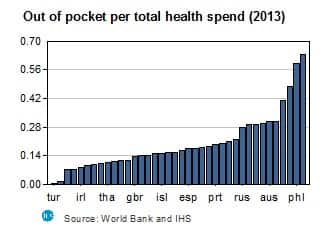 Originated as a limited deal among Pacific countries, the TPP has evolved into a plurilateral free trade agreement across a score of regulatory fields-including investment, intellectual property, the environment, and healthcare. The twelve currently confirmed members of the TPP are Australia, Brunei, Canada, Chile, Malaysia, Mexico, New Zealand, Japan, Peru, Singapore, the United States and Vietnam.

The TPP is about trade: President Obama is seeking to double US exports, as the twelve TPP countries account for 40% of global economic output. According to the Asia Development Bank Institute, the world would stand to gain 223 billion USD from TPP by 2025. However, TPP is more than trade. In the words of a US congressman, the TPP will be a "high-standard, broad-based regional pact." Indeed, promoting TPP is part and parcel of Obama's "Asia Pivot."

Considering half of its growth is driven by exports, South Korea's eagerness to join TPP-in order to take advantage of lower tariffs and integrated supply-chains within the club-is understandable. By accessing TPP, South Korea wishes to access new markets, attract new foreign direct investments, and improve its domestic competitiveness driven by FTA obligations. Collectively, the TPP countries account for 34 percent of South Korea's total outward foreign direct investment (FDI) and 53 percent of South Korea's total inward FDI. Believe it or not, one of Korea's biggest motives to join TPP has to do with Japan. Korea's investment, with the TPP-12 countries, is dominated by Japan and the US. South Korea already has a free trade agreement (FTA) with the latter but not with the former. Therefore, inking the TPP deal is much more valuable to Korea because Japan is part of the deal. Had Japan not joined the TPP talks, the negative impact of staying out of the TPP would have been much lower and the potential gains of joining much smaller as well, as South Korea has already had FTAs with all the major members of the TPP club, except Japan.

Although pharmaceuticals and medical devices account for a small percentage of US-South Korean trade, these are the sectors in which the US products are doing well in the South Korean market. However, the US has complained against the South Korean protection of its pharmaceutical industry (mostly involving generic drugs), according to the US Congressional Research Service. And previous US FTAs in South Korea (and Australia) suggest the FTAs have not delivered many of the concessions anticipated by the US pharma. For example, the KORUS FTA has not prevented US manufacturers from being hit by price cuts, disadvantageous reimbursement terms, and limited opportunities for redress. South Korea formally applied to access the TPP in April 2015 and whilst the US welcomed Korea's entry to the club on both economic and strategic grounds, it made its displeasure with Korea's execution of the KORUS FTA (e.g. in the pharmaceutical sector) well known. While South Korea is unlikely to become a founding member of the TPP, it does stand a good chance of joining the club in the second round.

To conclude, the country's high out-of-pocket medical cost is high, although significant improvement is projected over the long haul. Globally, while unlikely to access TPP as a founding member, South Korea is expected to join the club in the second round, reaping the benefits of entering a free trade agreement with Japan among other things. Incidentally, the recent signing of FTA between South Korea and China-which could pave the way for China's eventual TPP membership-will further benefit South Korea. Korea's eventual TPP membership is expected to make its economy more vibrant and resilient. That said, Korea is well advised to anticipate greater competition from the US (and other advanced economies within the club) in sectors including the pharmaceutical sector.

Joining the TPP may very well constrain Korean government's cost containment efforts in the pharmaceutical sector. One of the hurdles to TPP negotiations continues to be US pharmaceutical companies' insistence on 12 years of data exclusivity protection in relation to biological products, while US negotiators also argue for 20-year patent terms for modifications to existing medicines. In other words, once South Korea becomes a TPP member, high-priced pharmaceuticals will prevail in its domestic market for decades, frustrating the government's cost containment efforts in the pharmaceutical sector and affecting the government's stringent pricing and reimbursement mechanisms, including price cuts and increasing focus on generics and biosimilars.