With the Africa Aerospace and Defence (AAD) exhibition kicking off at Tshwane on 19 September, South Africa's defence industry is on display for the world's attention. However, the country's industrial base has struggled as orders from the South African government have declined in the face of reduced spending.

The South African government has been taking some proactive steps to engage with industry, however translating these into tangible actions to maintain the country's defence industrial base will be an important step in the coming years.

While major procurement programmes such as the infantry fighting vehicle acquisition under Project Hoefyster are in progress, and the initial phase of the Project Biro patrol vessel under contract, commitment to other major procurements is needed to cement South Africa's defence industrial capabilities and workforce.

As a result of South African defence procurement processes emphasising the localisation of workshare through the Defence Industrial Partnership (DIP) programme, and the enablement of economic empowerment through the Broad-Based Black Economic Empowerment (B-BBEE) for disadvantaged groups, the potential for upward growth of the defence industrial base is possible. However, it is reliant on either procurement from foreign sources or external research and development (R&D) funding to take advantage of these processes.

With a defence budget of USD3.6 billion in 2018, South Africa is the third largest defence spender in Africa. Only Algeria and Morocco will spend more this year, with defence budgets of USD9.5 billion and USD4.8 billion respectively. However, Jane's Defence Budgets projects that stronger defence budget growth in Egypt and Angola will mean that South Africa will fall to fifth place by 2023. 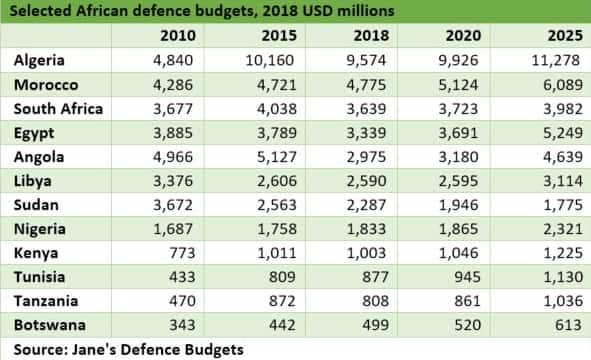 South Africa has one of the highest rankings in the World Bank's Doing Business Survey in the sub-Saharan African region and remains one of the most developed economies in the region. The country's solid monetary policy is safeguarded by the independence of the South African Reserve Bank (SARB).

While the election of Cyril Ramaphosa as the new leader of the ANC in December 2017 has been positive for investor confidence, the 2019 election does create some uncertainty in the country's economic outlook. Furthermore, the focus of the new leadership in the interim appears to be education, justice and social care over defence.

In real terms, South African defence spending in 2018 is back down to levels seen in 2010 after the cancellation of the Airbus A400M Atlas programme. However, should economic growth stabilise and immediate social concerns be addressed in the next three to five years, increases for the South African defence budget should gather momentum from 2022.

Beyond the subdued short-term outlook, the budget will need to increase by at least 7% annually (2% in real terms) from 2022 to address the capability gaps that have emerged over the last decade. By 2030, Jane's expects South African defence spending to reach USD7.5 billion (USD4.5bn in 2018$). As a proportion of GDP, the defence budget is expected to hold steady at just below 1%.

From 2020, Jane's expects defence procurement to increase as a proportion of the budget, reaching almost 20% in 2030 from 11% this year as the country seeks to replace key capabilities, including the Lockheed Martin C-130BZ transport fleet. 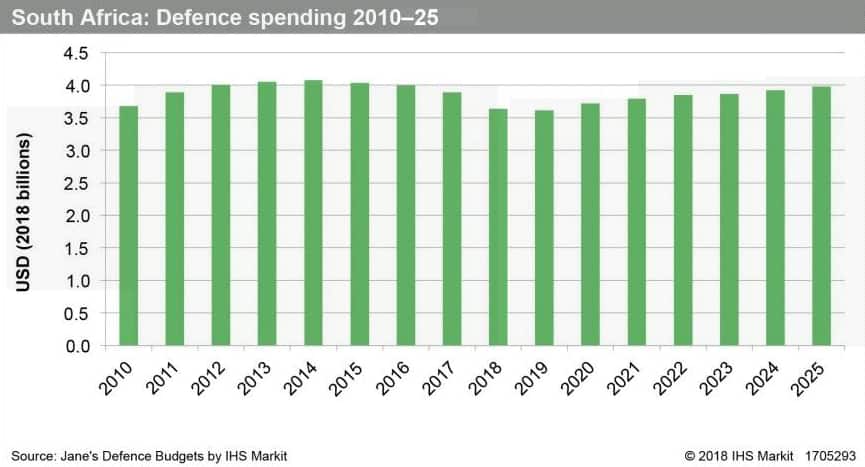 As South African defence investment in its own procurements has been under considerable pressure over the past decade, the country's defence industrial base has needed to focus on exports to sustain its capabilities and develop new solutions using external sources of funding.

South Africa has been able to develop some highly competitive defence equipment solutions for the global market based on the country's harsh operating environment and excellent technical capabilities,.

These efforts have been most notable in the land systems domain. Exports of armoured vehicles have seen companies such as Denel, DCD Protected Mobility and Paramount Group export platforms and subsystems to countries such as Azerbaijan, Kazakhstan, Malaysia, and the United States. These have included not just armoured fighting vehicles, but also the DCD Protected Mobility developed Husky, which has been widely respected and adopted for counter-IED work.

Beyond land systems, South African expertise has been utilised to develop air-launched weapons systems such as the Denel Dynamics A-Darter air-to-air missile, developed with Brazil, and a range of electronic warfare and electro-optical systems. Paramount Group has also worked to develop a surveillance and light-attack aircraft, the AHRLAC and Mwari respectively, with the company reportedly already working on an export order. The firm is now targeting possible requirements for the platform in the United States through the launching of the Bronco II programme and is exploring potential build and supply chain options in the US.

Pushing the boundaries into emerging and peer markets, while also pursuing opportunities in more mature markets, shows that industry has a high degree of self-confidence that is backed up by the track record of its capabilities. Openness to partnerships will remain a key feature of South African industry as it works to export its solutions to the global market, and move beyond a traditional supplier-customer relationship.

Despite these export efforts, increased procurement from the South African government in defence equipment - particularly as outlined under the Defence Review - would help to drive the country's defence industrial base, with micro-, small-, and medium-sized enterprises likely to significantly benefit from acquisitions. 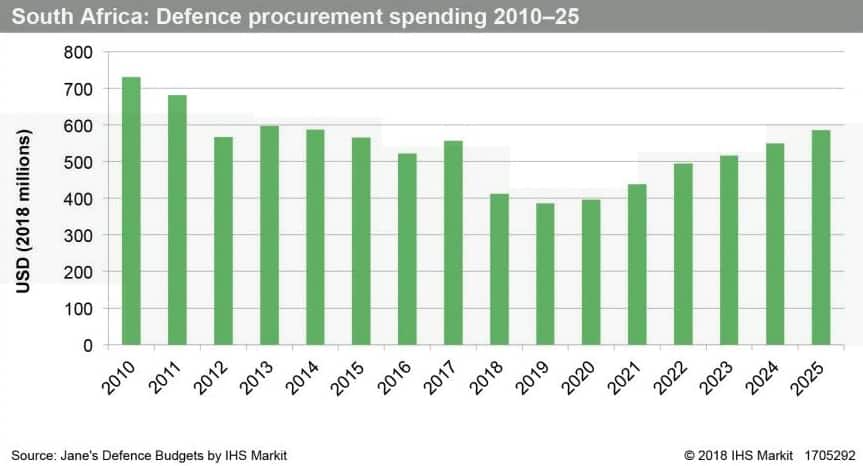 Learn more about Jane's Defence Budgets and Jane's Market Forecasts or get in touch for more information.