On the 8th May, South Africa elected the African National Congress to a new term in office with the smallest majority of votes seen during the party's reign. Reflective of declining sentiment amid social and economic woes, President Cyril Ramaphosa now has a hard task to bring the country out of its numerous difficulties.

While the economy has emerged from a recession that mired business sentiment last year, PMI surveys suggest that official data will likely show only modest second quarter growth after only a marginal first quarter expansion. Furthermore, an escalation of US tariffs on Chinese exports may feed through into a decline in South African exports.

The IHS Markit South Africa PMI® covers a representative sample of 400 private sector companies operating in South Africa. A reading above 50.0 signals growth in the private sector, whereas a reading below 50.0 signals a deterioration. Historically, a reading of 50.0 correlates with approximately 1.4% annual GDP growth. The track record of the survey suggests that the PMI needs to drop to 46.9 to signal a contraction of the economy on an annual basis.

For eight out of the last ten months, the headline PMI has registered below 50.0, albeit only signalling a contraction of the economy for one month (October 2018). The latest survey data for April registered only a slight improvement in business conditions. 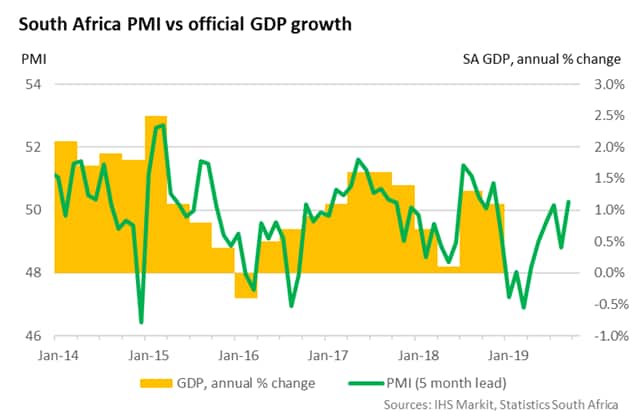 As such, growth in the first half of the year will likely be modest at best. The PMI points to very weak annual growth in Q1, with official figures not released until June. More encouragingly, April data suggests that growth has picked up in the second quarter, albeit remaining subdued.

The weakness of business activity earlier this year was driven firstly by weak demand in light of a domestic recession and increasingly sluggish global trade growth via US tariffs on Chinese goods. This fed through into weak demand for South African metal exports from Chinese customers.

Panellists also pointed to frequent power cuts towards the end of the first quarter, restricting sales and output levels. The nation's power supplier, Eskom, has implemented multiple rounds of load shedding as it struggles with excess demand. 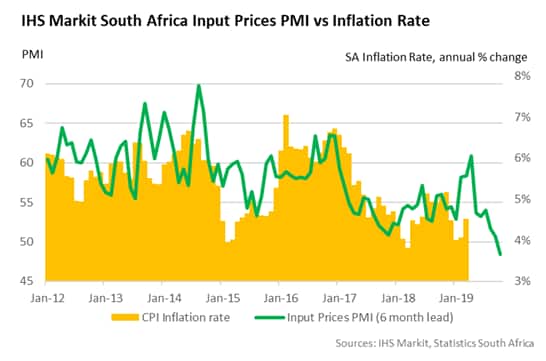 On the flip side, fears of a spike in price inflation have eased in recent months. Due to a deteriorating rand value late last year, a rise in the PMI's Input Prices sub-index suggested that inflation may jump to around 6%. However, the rise in the seasonally adjusted index was brief, and since then it has declined to the lowest in the series history as firms cut back on input purchases. Thus, inflation is likely to remain well within the government's target of 3-6%.

On 5th May, President Trump announced increased tariffs on Chinese imports. Raising fees from 10% to 25% on $200bn worth of goods as from 10th May, the US president has looked to put pressure on Chinese firms in what is already a difficult business environment. Although fiscal stimulus may help support growth in the domestic economy, manufacturing output may remain sluggish, leading Chinese producers to decrease input spending.

Already, South Africa has been particularly exposed to the impact of China's slowdown resulting from US tariffs. They are South Africa's largest trading partner, accounting for 16% of the country's total exports1. Moreover, mining and metal goods represent a large proportion of these exports and demand depends heavily on the rate of industrial production in China. 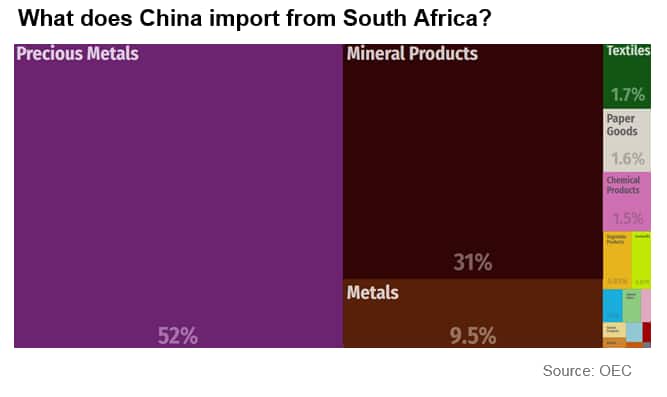 Tariff hikes are likely to pose further risks to trade for South Africa. The level of GDP from mining was the lowest in two years in the final quarter of 2018, and could weaken further. IHS Markit's Global Link Model predicts a drop of 0.8% in mining growth as a result of the trade war, alongside softer growth forecasts for a number of other sectors.

Cyril Ramaphosa starts his first full term of government with a lot to contend with. Poor short-term growth is fed by structural rigidities that hinder the country from achieving long spells of progress. Weak infrastructure, stalling business investment and near-record levels of unemployment all dampen firms' outlook for future activity. 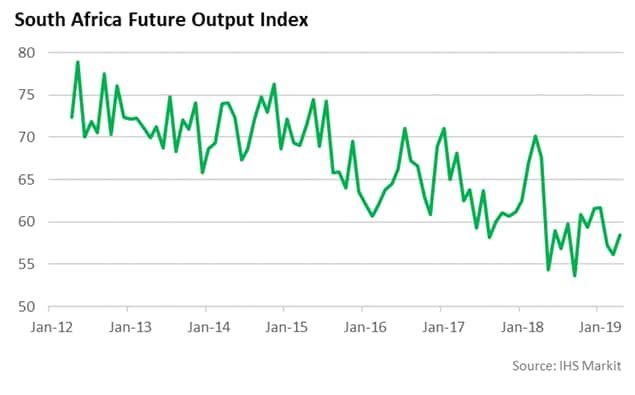 Ramaphosa has multiple plans to tackle these problems. Firstly, he aims to deal with the overwhelming supply issues on the electricity network after building delays to two new power stations. A likely outcome is that Eskom is split up into three entities responsible for generation, transmission and distribution of energy. While unlikely to stop further short-term disruption, this could help build an improved long-term structure for the energy industry and boost business confidence.

More controversial are his substantive land reforms that aim to redistribute land more equitably among South Africa's racial classes. Soaring unemployment and poverty levels are key issues restricting growth, and Ramaphosa hopes such reforms will address these. However, the plan has already received notable push-back from local and foreign investors.

The President will also look to maximise the opportunity of an African free trade area, especially as larger trade partners provide increasing uncertainty over exports. South Africa is in a prime position to establish itself as a manufacturing hub for the continent, so the removal of barriers with its neighbours could provide a material boost to output and employment.

Establishing long-term plans may restore some hope among the public, but they do not detract from the fact that businesses are stumbling at the start of 2019. IHS Markit forecasts only 1.2% GDP growth in 2019, a low figure for the country's post-apartheid era. While this is partly due to weak international trade, it is also affected by structural issues that the government desperately needs to address. President Ramaphosa now has some time to do this, but not forever, as the electorate's patience is starting to ebb away.

The next South Africa PMI is released on Wednesday 5th June.

1Source: The Observatory of Economic Complexity