The latest data from Jane's highlights that ongoing research and development efforts in the hypersonic missile market will disrupt the defence market as we know it.

"As hypersonic weapons fly at extremely high speeds and some are maneuverable, they are more likely to disrupt the international offense-defense balance of technology, increasingly blurring the line between nuclear and conventional weapons," said Rahul Udoshi, analyst at Jane's by IHS Markit. "Striking virtually anywhere in the world within an hour means these weapons affect the perceptions of strategic stability and further risk crisis escalation over ambiguity of warhead types." 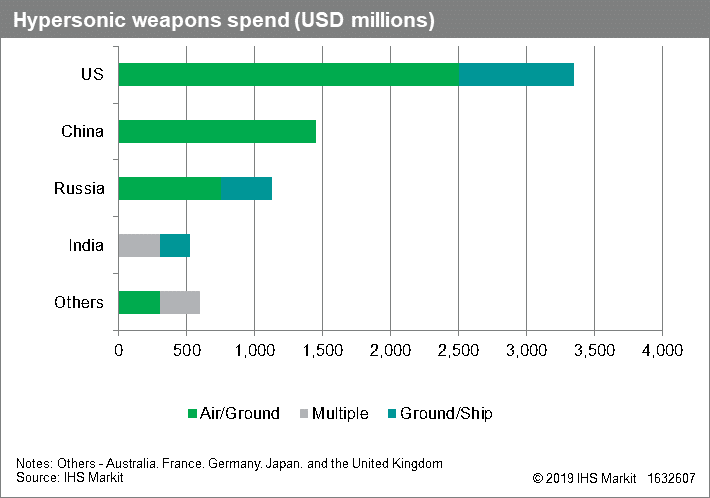 Deep pockets for long term missions: investment in hypersonics is concentrated to the US, Russia and China

China, Russia and the United States are all currently investing heavily in hypersonics, while a few other countries are also exploring the technology to a much lesser degree.

To date, Jane's estimates the US to have spent over USD3.3 billion for the research and development of hypersonic technologies and weapons, with a further 2020 budget request of USD2.6 billion.

"Currently, we see Russia and China both leading research and developmental work with considerable funding, suggesting that the US has somehow fallen behind these countries. However, this may change in the near term, given the existing US programmes' priority and commitment." said Udoshi.

Russia is estimated to have spent over $1.1 billion covering the Avangard, 3M22 Tsirkon and Kinzhal programs. Russian spend on hypersonic weapons is not expected to rise significantly as the Kinzhal is already in service while the Tsirkon and Avangard are close to entering service.

Chinese funding for hypersonic weapons is estimated to be more than Russia with over $1.5 billion spent on programs such as the DF-ZF and the Starry Sky-2. DF-ZF is expected to be operational by 2020, while Starry Sky would be operational by around 2025. China is expected to sustain its funding for hypersonic technologies as it takes the current programmes to their conclusion.