In March 2022, Sonatrach made the second hydrocarbon discovery in the Liassic play of the Benoud Trough with the drilling of the Ouled Sidi Cheikh 1 (OSC-1) wildcat. The well flowed 925 bbl/d of oil and 228 Mscf/d of gas from a Lias carbonate reservoir, de-risking the Lias Structural play in the basin.

What makes OSC-1 significant is that it is located at the eastern end of the Benoud Trough and well within the basin limits. The well thus considerably de-risks the Liassic play throughout the whole basin and the test results indicate that beyond the geological success, there is a real economic potential in this play.

The timing of the Benoud opening is also excellent as it benefits from the favorable terms of the new hydrocarbon law which became applicable just last year.

The first discovery in the Liassic play was made in 2018 with the BIR-1 well which is located at the western end of the Benoud Trough, on its southern limit with the Meharez-oued Namous uplift. OSC-1 is only the third hydrocarbon discovery in the basin, after BIR-1 and MAMI-1, the latter being an oil discovery made in 2010, presumably in an Ordovician reservoir, on the southern edge of the basin, at its eastern end.

Contrary to most of the producing basins of Algeria, which are further south, the Benoud Trough is located on the northern margin of the Sahara platform (fig.1), close to the Atlas mountain range. It is the second basin with a Liassic carbonate play in Algeria, the first being the Tilrhemt Uplift, where a dolomitic play was discovered when a noncommercial Liassic gas reservoir was intersected in the Hassi R'Mel field, in 1957. 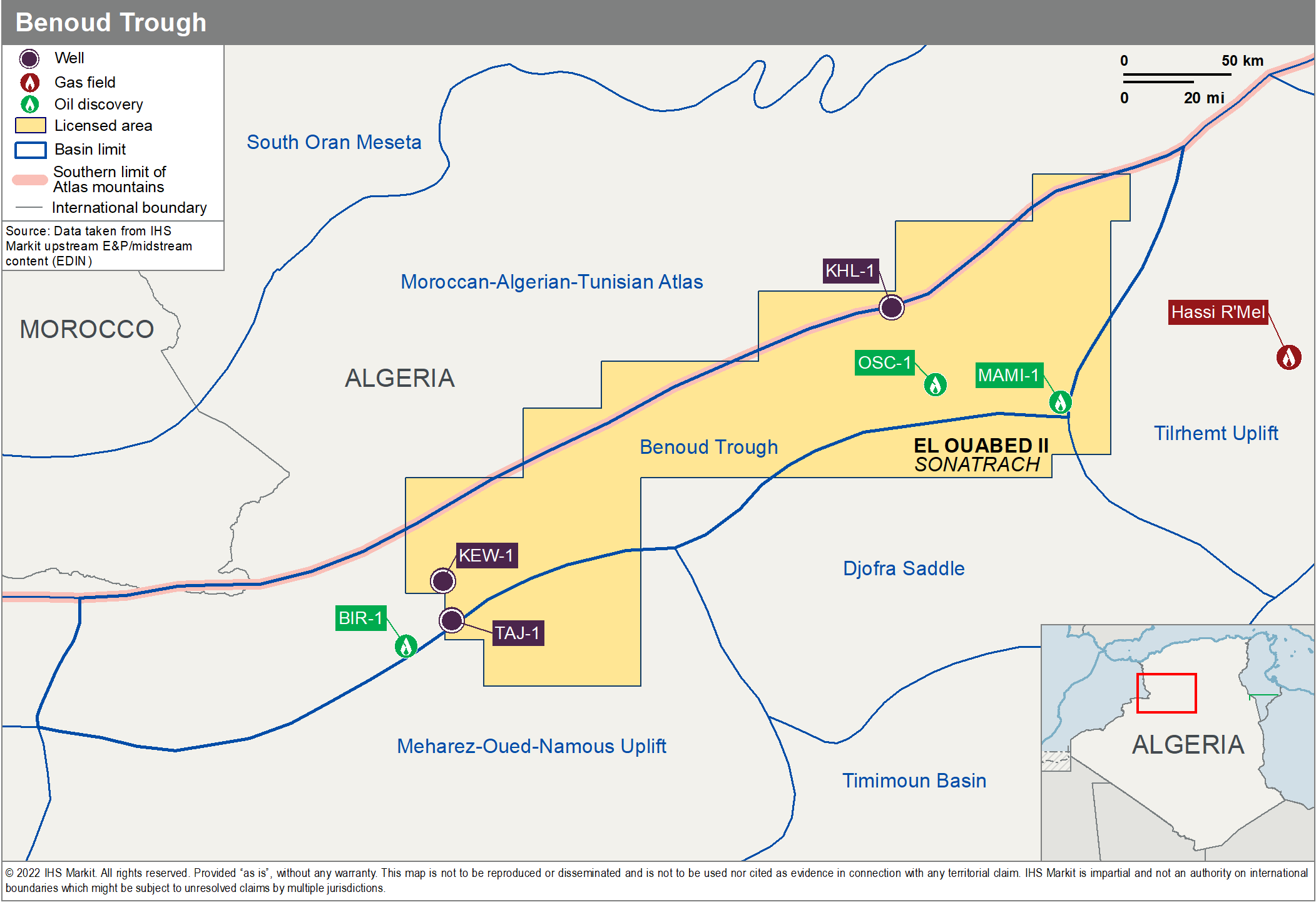 Figure 1: Location of OSC-1 alongside previous wells and oil discoveries in the Benoud Trough.

The OSC-1 discovery sits in the El Ouabed II concession, approximately 158 km to the west of the super-giant Hassi R'Mel gas field, in north-central Algeria.

As mentioned above, the two positive wells drilled in the basin before (BIR-1 and MAMI-1), albeit on its very edge, helped maintain Sonatrach's interest in the Benoud Trough.

Exploration in the basin started as early as 1955, with the first well drilled by CFPA. The well targeted the Trias and the Paleozoic formations. Ten years later, TAJ-1 was drilled by ESSO and recovered oil & gas shows from the Lias and gas shows from the Devonian. Two additional wells drilled by Sonatrach, KEW-1 and KHL-1, reached the carbonates of the Lias Series, respectively in 1979 and 1992.

Between 1972 and 2018, several seismic surveys were shot in the basin, based on which many leads and prospects were defined targeting the Lias Structural play.

The last basin opening exploration wave in Algeria was in the Berkine Basin in the 1990's. So, if the initial success in the Benoud Trough is confirmed, as OSC-1 suggests, this would be a big breath of fresh air for the Algerian Upstream sector.

What does this discovery mean?

The OSC-1 well success considerably increases the petroleum potential of the Benoud Trough.

As pointed out in the introduction, the OSC-1 well is significant as it de-risks the Liassic play over the whole length of the Benoud Trough and its location, well within the basin limits as opposed to on the very edge for the previous discoveries, indicates that the whole acreage within the basin is prospective. This is a big boost for the exploration potential of this 24,000 sq km basin.

The test results of OSC-1 are also promising. With 925 b/d of oil, they are better than the 574 b/d of oil of BIR-1 and clearly demonstrate the potential to commercially develop the discovery. OSC-1 also establishes the Liassic play as the prime target in this emerging basin.

What to expect for the near future?

Sonatrach suggests that as some of the numerous prospects and leads will be drilled in the basin, a new hydrocarbon district could emerge to the west of the super-giant gas producing field Hassi R'Mel.

The emergence of a new hydrocarbon district is excellent news for the Algerian Upstream sector. The OSC-1 discovery shows that there is still a lot of exploration potential in the country, not only in terms of near-field exploration in mature basins but also in terms of basin-opening exploration.

Further information on exploration activity in Algeria, and the rest of the world, is available via our Upstream Intelligence solutions.